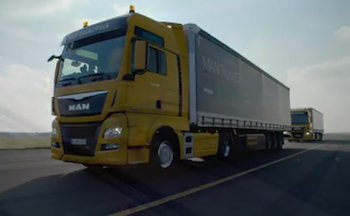 The challenge, run by the current president of the European Council, saw OEMs running autonomous and human-driven trucks to Rotterdam, the Netherlands, from several European cities.

The aim of the challenge was to highlight the potential benefits of autonomous platooning, including the economic, traffic management and safety advantages. It also sought to underline the need for legislation and standardisation of intelligent transport systems across Europe – not least the issue of varying rules and regulations in different countries regarding speed and safe distances between vehicles.

Platooning technology – which involves a number of vehicles autonomously following one conventionally driven one which they communicate with via wifi – could be adopted by the automotive logistics industry, helping with driver shortage issues and addressing road safety and environmental challenges.

The Eco Twin consortium, comprising NXP, Daf, TNO and Ricardo, was one of the groups taking part in the challenge. Its RoadLINK technology, developed by NXP, aims to maintain a constant 0.5 second gap between vehicles – or 10 metres (30ft) at a constant 80kph (50mph).

In the event of any emergency braking, the responsiveness of the trailing truck is estimated to be 25 times faster than the average human reaction time of one second, which should considerably improve safety.

Along with the platooning commands, the technology provides real-time video and audio communication between the two vehicles, allowing their occupants to talk to each other without relying on mobile networks and the camera in the lead truck to stream its view of the road ahead to the driver in the trailing truck.

The Mercs travel with 15 metres between them, a three-truck convoy only requiring 80 metres of road in a platoon compared to 150 metres when driven conventionally.

Daimler has claimed its platoon technology reduces fuel consumption by 10% as the second and third truck can ride in the slipstream of the lead vehicle.

Although the technology is very promising, there is still some way to go before platooning car carriers will be seen on public roads around the world.

Ron Borsboom, the Daf Trucks board member who is responsible for product development, said: “It goes without saying that there is still a lot of continued development required before we can introduce platooning as a new technology on the market.

“This is definitely not a process that will be complete before 2020,” he added. “There is still a great deal to be sorted out in terms of legislation, liability and acceptance.”