The UK automotive industry has already spent at least £330m ($401m) on contingency plans to cover the country’s departure from the EU, according to the Society of Motor Manufacturers and Traders (SMMT). At the same time, investment has stalled as automotive manufacturers brace themselves for Brexit and big investors fear a no-deal scenario, said the SMMT’s CEO, Mike Hawes, at a press conference in London yesterday. 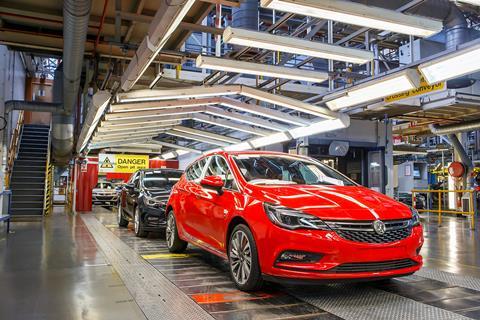 “We need a deal that maintains frictionless, tariff-free trade; competitive just-in-time manufacturing depends on that. Any friction has cost [and] any tariffs could undermine the very viability of the industry,” said Hawes. The SMMT revealed in its 2019 UK Automotive Trade Report released last month that delays in shipments of parts caused by problems at the border could cost the industry up to £50,000 ($62,400) per minute.

The figure of £330m for contingency planning includes the stockpiling of materials and parts, warehousing, new logistics solutions, extra insurance and training in new customs procedures. However, Hawes warned that this was an early estimate as data is still being collected and said that the figure will surely rise even further before October 31, the date when the UK is now due to leave the EU.

Trouble at home and abroad
Meanwhile, Hawes revealed that only a relatively small amount has been invested in the UK automotive industry in the first half of 2019. Over the last seven years, he said, the average amount invested per annum had been around £2.5 billion, but by the end of June this year only £90m had been invested – and that figure includes £23m of government support for electrification programmes. Hawes said the drop in investment could not be explained by the cyclical nature of the automotive industry, describing the fall as “precipitous”.

The stalled investment comes at a time when the UK is also struggling with a softening global market for its exports, which make up 80% of its total production. In the first half of this year, demand in the biggest market for UK-made vehicles, the EU, dropped by 15.6% while the second largest market, the US, declined by -12.9%. China was down -53.1%, Japan -10.5% and Turkey -93.0%. The number of cars built in the UK for export decreased by -21% to 533,318 units.

“We can’t have confidence in the future without confidence that we can get a deal [with the EU]” – Mike Hawes, SMMT

At home, too, the market is in decline. UK car factories produced 133,203 units for the domestic consumers in the first half of the year, a decrease of -16.4%.

Underlining the importance of coming to a mutually beneficial arrangement with the EU, Hawes pointed out that, while the EU takes 57% of UK exports, the UK is also an important export market for the bloc. Eight out of ten UK-made cars end up in the EU, but seven out of ten new cars on UK roads originated in EU factories.

Keeping up with global transformation
Out of all these figures, it is the drop-off in investment that Hawes regarded as “most worrying”, because it coincides with the transformation of the global automotive industry. He said that political and economic uncertainty in the UK, and in particular the prospect of a no-deal Brexit, was causing investment to dry up when the country needed it most.

“The industry is changing in terms of electric vehicles, connectivity [and] driverless cars. The global industry is investing serious amounts of money in managing these different paradigm shifts simultaneously [and] we need to make sure the UK can build on its fundamental strengths to attract more investment.” That now appears to be at risk.

“Companies here [in the UK] are spending money on contingency planning rather than new technological investment,” Hawes added. 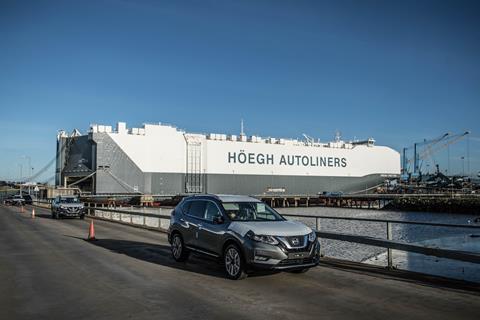 Exports of UK-made vehicles to key markets including the EU dropped in the first half of the year. Credit: Port of Tyne

One big investment that just missed being included in the half-year figures was JLR’s pledge earlier this month to invest £1 billion in its Castle Bromwich plant for production of the new, electric XJ. Hawes said this was “hugely welcome” news but not representative of the overall, downward trend.

Hawes emphasised the existing assets of the UK automotive industry – namely, a highly skilled, flexible labour force, strong brands, engineering excellence and high productivity –­ but said there was a need to support its shift to an electric future, including a supply chain that could include a gigafactory for battery production.

During a visit to Wales yesterday, the UK’s new prime minister, Boris Johnson, said the government was “not aiming for a no-deal Brexit” but also said it was “up to the EU” whether the UK left without a deal – words that are unlikely to reassure business.

“We can’t have confidence in the future without confidence that we can get a deal,” stated Hawes at the SMMT briefing.