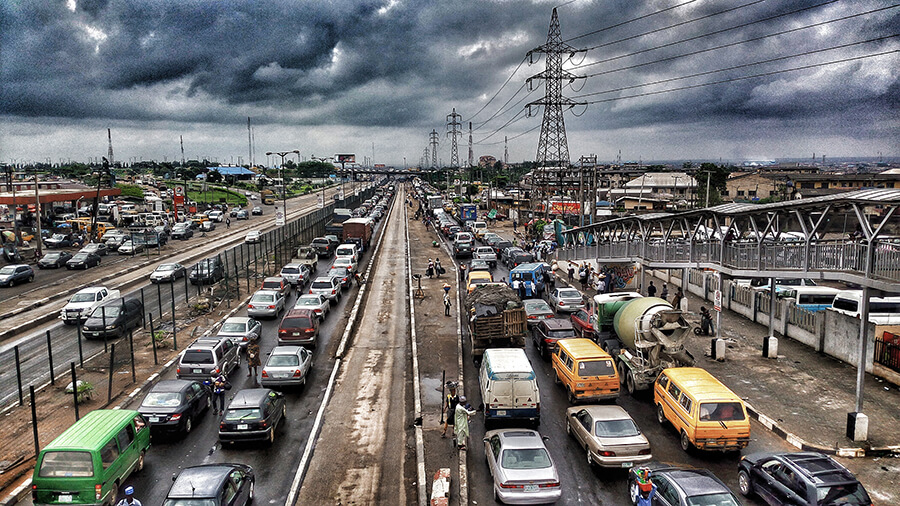 Nigeria has lost its claim to being home to the busiest port in West Africa as a consequence of chronic traffic congestion, corruption and inefficiency. The crown has passed from Apapa, in the state of Lagos, to the port of Lomé, in Togo.

Data from Dynamar, a Dutch maritime intelligence and consulting firm, shows that container traffic through Lomé grew threefold over the five years from 2013 to 2017. This is remarkable, in light of UN trade data showing that Togo exported goods to a value of just $1 billion in 2017, while imports were worth $2 billion; the much bigger port facilities in Lagos handled total exports worth $40 billion and imports worth $35 billion that year.

This change has come about in part because of a newly commissioned container terminal at Lomé, which is already handling around 75% of the port’s container traffic, according to Dynamar’s data. But it is also because, while Lomé has improved its infrastructure, Nigeria’s ports have been deteriorating – especially Apapa, which has served as a gateway to the region for years.

Apapa’s main problem is that it is surrounded by the sprawl of Lagos, where broken roads and clogged traffic make getting to and from the terminal an odyssey. 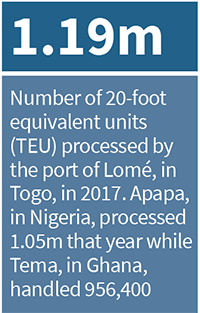 “The ports in Nigeria in general, and Lagos in particular, continue to have various issues including insecurity, the inefficiency of government agencies and inadequate and dilapidated infrastructure,” says Damimola Olawuyi, a spokesperson for Lagos-based investment consultancy, SB Morgen Intelligence.

Countering congestionIn and around Lagos, the congestion translates into extra costs, loss of trade and disruption to trade and transport contracts. It also results in delays in loading and unloading ships at the dockside, forcing other vessels trying to enter the harbour to wait for a berth – sometimes for days, sometimes for weeks.

“If ships on berth do not leave, those arriving cannot berth. That means these ships will keep waiting, all the while burning fuel and having to pay employees on board,” says Olawuyi.

This, he suggests, has started driving the region’s automotive sector to seek alternatives to importing via Nigeria. “Historically, a significant portion of used cars has come in through the land borders. It is expected that this diversion from Nigerian ports will grow as the seaports become less usable.”

The volume of automotive imports arriving at ports outside Nigeria has already been increasing for other reasons. Nigeria has been tightening restrictions on vehicle imports, almost all of which are used cars, trucks and buses sourced from Europe and Japan. To avoid elevated tariffs on such imports, some dealers have begun offloading vehicles outside Nigeria and driving across one of the many land entry points.

Fakhrriyyah Hashim, a Lagos-based business development specialist, says in a blog post that used cars – known colloquially as Tokunbo cars – will continue to be brought in despite the restrictions.

“Despite regulations, imports of Tokunbo cars have been largely unaffected due to Nigeria’s porous borders, which car dealers and smugglers [use] to avoid payment of high tariffs on imported cars,” she states.

Customs statistics from Nigeria show that 131,994 vehicles, both new and used, were imported through Apapa port in 2015. But the following year, after the government applied a tariff of 70% on new vehicles and 35% on used vehicles, imports through Apapa fell to 96,222 units.

The government has tried to implement tighter control over its road borders, but with little effect, Hashim says. “Random stop-and-search operations on the road by customs officials have also done very little to curb illegal imports of used Tokunbo cars, partly due to an established corruption network,” she contends.

"The ports in Nigeria in general, and Lagos in particular, continue to have various issues including insecurity, the inefficiency of government agencies and inadequate and dilapidated infrastructure" - Damimola Olawuyi, SB Morgen Intelligence

Low global rankingIn the World Bank’s Trading Across Borders survey, which measures the time and expense involved in importing and exporting goods, Nigeria ranks near the bottom of the list at 182 out of 190 countries, below Syria and Afghanistan.

The ports of Apapa, Calabar and Port Harcourt, among others, are beset with inefficiencies compounded by horrendous traffic on the roads leading to them. Truck drivers engaged in container work say they can spend days just getting through the city to reach the port of Apapa, for instance.

Once they get there, drivers' troubles are only just beginning: transporters subsequently have to contend with customs, immigration and security officials whose outstretched palms need to be greased before the required clearances are made and they can actually pick up their containers. In total, it can take 20 days to clear products at Apapa, compared with 48 hours in neighbouring Benin and Ghana, according to the The Lagos Chamber of Commerce & Industry.

Plans to fix such problems have so far come to nothing. But one of the candidates for state governor in Lagos’ forthcoming election, Babatunde Gbadamosi, recently put forward a plan that has drawn a positive response.

“The first thing we are going to do is copy the Ethiopians and build a heavy railway line the lengthof Lagos state,” he says. “It should have exit points to major roads along its length. The point of this is that there must be container terminals at each of these exits.”

Whether his plans will come to anything remains to be seen. In the meantime, shippers continue to make use of alternatives such as Lomé.

[mpu_ad]Togo is a thin strip of a country, wedged between Ghana to the west and Benin to the east. Since Nigeria lies to the east of Benin, goods arriving at Lomé bound for Nigeria must cross Benin. This involves a transit tax of 6% by item value. And, inevitably, police and customs officials along the way need to be bribed to ensure smooth passage.

Togo and Benin both vie for Nigeria-bound trade, as well as for trade deeper into Africa to landlocked countries like Mali, Burkina Faso and Niger. Togo has the edge on Benin, however, in keeping its tariffs aggressively low and offering better port facilities. Being the only deep-water port in the sub-region with a depth of 17 metres, Lomé also dominates trade into the Sahel region (a belt of land 620 miles wide to the north that spans Africa from west to east, including parts of Senegal, Mauritania, Mali, Burkina Faso, Algeria, Niger, Chad, Nigeria, Cameroon, the Central African Republic, Sudan, South Sudan, Eritrea and Ethiopia).

Infrastructure boostThe recently completed $380m container port in Lomé is the biggest infrastructure scheme in Togo’s history. The government intends it to become a transhipment hub for all ports in the region.

“The government understands that a functioning port is needed to grow various aspects of the economy, including mining,” said Klossi Adjahan, an official in the country’s mining ministry, speaking on the sidelines of the Mining Indaba conference in Cape Town recently.

“The focus will be developing mineral resources, such as manganese deposits in the interior, [and] transporting [them] by rail to the bulk loading facility. But this requires a good container port as well, because the mining sector will need to bring in capital goods, such as machinery, trucks, loaders and even vehicles for the transport of personnel.”

The Togolese government wants to use its geography to its advantage. In the works to achieve this is a long-term project to develop a road and rail corridor stretching the length of the country. The final plan was published in 2013 and is now being phased in. The plan is to create a 667km long corridor stretching from Lomé, in the south, to the northern border post at Cinkassé, leading into Burkina Faso. A dry port is also planned for Cinkassé.

"Despite regulations, imports of Tokunbo cars have been largely unaffected due to Nigeria’s porous borders, which car dealers and smugglers [use] to avoid payment of high tariffs on imported cars" - Fakhrriyyah Hashim, business development specialist

Burkina Faso, meanwhile, has invested substantially in a logistics corridor of its own, called CU9. This connects the border of the country to the capital, Ouagadougou. Thanks to upgrades on both sides of the frontier, vehicles can now travel the 975km between Lomé and Ouagadougou in less than three days.

The CU9 road corridor is used to transport more than 60% of Burkina Faso’s imports. An alternative to this is the 1,000km-plus stretch from Ouagadougou to Abidjan port, in the Ivory Coast. This was the preferred route for truck drivers until recently, but the improved CU9 together with road upgrades in Togo has lured transhippers to Lomé instead.

“Transhipments are everything,” says Malik Delain, an entrepreneur based in Lomé who previously worked out of the Nigerian port of Apapa. Apapa is larger and serves a much greater population, he admits – Nigeria has around 150m people to Togo’s 9m – but Delain says efficiency trumps size.

To clear customs in Lomé takes just two days; while to do so in Lagos will take up to 22, he confirms.

Subject to dealing with its own potential for congestion (see below), Lomé looks likely to keep its new crown as the busiest port in West Africa for some time to come.

Lomé looks to the future 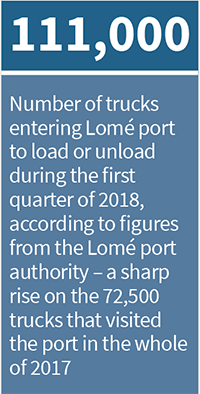 Lomé is one of Africa’s best equipped and best laid-out ports. The United Nations Conference on Trade and Development (Unctad) puts Togo second only to South Africa – the continent’s largest industrial economy – in terms of port efficiency.

It is also well positioned to serve the region’s automotive needs, which consist largely of used car imports. At present around 150 ro-ro vessels visit the port each year, according to the Logistics Capacity Assessment of the World Food Program.

Lomé is well suited to the region’s vehicle trade. It has 600,000 sq.m of parking for second-hand vehicles. These are dedicated parks for dealers to store their imported stock. Another 20,770 sq.m is available for trucks waiting to be loaded.

Inevitably, as the port becomes more popular, it risks becoming clogged with traffic itself. Data from the Lomé port authority show traffic rising: in 2017, around 72,500 trucks visited the port; in just the first quarter of 2018, 111,000 trucks entered to load or unload consignments.

To help address the threat of congestion, an expansion project was announced in February 2019 to improve capacity in the form of a 50-hectare multi-service logistics park that will be built in the nearby suburb of Adakpamé.

“Geotechnical studies are being conducted on the site with the financial support of France and, in the coming months, the construction works can start,” Kanka-Malik Natchaba, minister for special projects, stated recently.

The project will cost up to $60m and will include a dedicated access road to the port. It will also have a modern security checkpoint, a truck parking lot, basic facilities, a logistics and control centre, offices, accommodation and restaurants.

Wider plans for regional infrastructure will also benefit Lomé. In February, the African Development Bank (AfDB) and the EU agreed to make $22.7m available for a feasibility study into the construction of the long-awaited Abidjan-Lagos corridor.

This will feature a 1,000km six-lane highway from Lagos, passing through Benin and Togo and continuing through Ghana, where it will link through Accra, before concluding in the Ivory Coast in Abidjan. Altogether, these five economies represent around $16 billion in trade, with a combined population of 320m.

The project is part of the AfDB’s efforts to improve logistics links between African states, where cross-country trade is low. Archaic border posts and a lack of good roads and bridges have stunted economic activity between neighbouring states but the AfDB wants this to change.

“We need to break down all barriers that impede the free movement of people across the continent, especially that of workers, because this is vital for promoting investment,” said AfDB president Akinwumi Adesina.

A similar 1,000km link between Addis Ababa, in Ethiopia, and the port of Mombasa, in Kenya in East Africa, has resulted in a fivefold increase in trade between the two countries since completion in 2016.