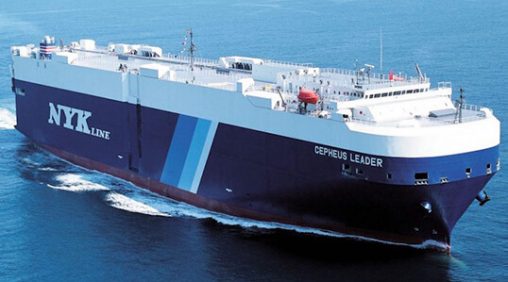 Proposed US automotive tariffs would have a negative impact on east-west trade routes as American imports of finished vehicles and automotive parts would likely decrease in 2020 and 2021, according to a white paper published last week by Drewry.

Specialist car carriers and leading container lines will suffer, along with key US ports, importers, exporters, carmakers and component manufacturers, the UK-based shipping consultancy warns looking at the potential impact of the levies president Trump has proposed on national security grounds.

“The auto industry is a globalised and heavily interlinked industry with a complex supply chain. Any level of artificial cost imposition is likely to have a myriad of consequences, both intended and unintended, for stakeholders operating in the key East-West trade routes,” Drewry added.

In the car carrier segment, any reduction in volumes shipped would be extremely unwelcome as the sector continues to struggle to climb out of a poor market due to overcapacity and slow demand growth coupled with uncertainty, the consultancy said.

Drewry expects those operators would be most affected should US imports of Asian cars decline, adding: “The imposition of tariffs could be particularly painful for Asian carmakers, including Toyota, Nissan, Honda and Hyundai, which have the US as a key market.”

Japan accounts for 67% of the eastbound finished vehicle import trade, according to Drewry.

[mpu_ad]European operators WWL and Hoegh would be most affected if westbound volume son the Transatlantic route were to decline, with K-Line also taking a hit. Germany holds 63% of westbound finished vehicle import trade.

Drewry predicts a general decline in containerised automotive part imports into the US, should tariffs be set. Manufacturers in China with 61% of the Transpacific trade and Germany with 78% of Transatlantic trade would suffer most.

In the automotive parts inbound trade, LA/LB handled most at approximately 1.9m tonnes, giving a 42% market share of all US containerised automotive parts imports, followed by NY/NJ with around 480,000 tonnes and 10%.

In Drewry’s view the proposed duties are not good news for US vehicle producers or consumers.

Assuming tariffs are introduced mid-May, the consultancy commented: “US importers will attempt to absorb the extra cost for as long as they can, and depending on the level of the tariff, we expect them to start passing part of the extra costs onto their customers starting the fourth quarter of this year…

Drewry cites estimates by the Center for Automotive Research in Michigan that imposition of automotive tariffs as high as 25% would induce a loss of 366,900 jobs in the car sector, average price increases of $2,750 per vehicle (including US-built vehicles) and lost finished vehicle sales of 1.3m units, which is about 8% of total sales registered last year.

Economic impact“The loss of hundreds of thousands of jobs and finished vehicle sales could certainly weaken the demand for imported finished vehicles, and auto parts for further domestic production of cars,” Drewry adds.

Neil Davidson, senior analyst for ports and terminals, pointed out the agency assumes some foreign producers may lower their finished vehicle prices to protect sales.

As for effects on the United States’ neighbours Mexico and Canada, Drewry said: “Assuming for a moment that the new NAFTA agreement will shortly be approved by the US Congress, that may represent opportunities for the Mexican and Canadian finished vehicle production sector to fill any voids; however, it is unlikely they alone can entirely meet the needs of the diversified US finished vehicle consumer sector.

“Furthermore, most of the finished vehicle and auto parts trade with the US is via surface transport mode, so US ports would still be impacted.”

It is widely suspected that president Trump regards imposition of automotive tariffs as a bargaining chip in negotiations for a wider trade deal with the EU.

Drewry said: “US tariffs on European cars and auto parts would imply a significant escalation of Transatlantic tensions because the value of EU automotive exports to the American market is about ten times greater than that of the bloc’s steel and aluminium exports combined, in monetary terms.”

The Trump administration’s imposition of 25% levies on steel imports and 10% on aluminium last year has added to the cost of two key vehicle-making inputs for OEMs and tier suppliers alike.

“For maritime trade, we conclude that the tariff impact over US finished vehicle and auto parts trade will be significant in the high-intensity scenario[of 25% tariffs]and be felt mostly over 2020-2021,” it added.