European ports prepare for the worst but hope for the best 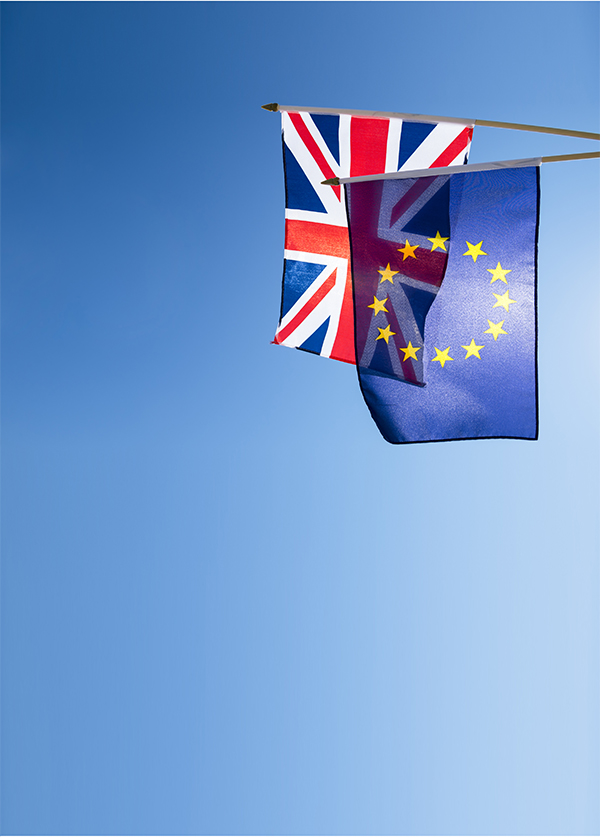 While vehicle import and export trade through the UK remained strong in 2018, the ports handling that trade were working under the gathering clouds of Brexit uncertainty.

Figures from the Society of Motor Manufacturers and Traders (SMMT) show that the UK exported over 1.2m new passenger vehicles last year, 81.5% of what the country’s car plants made and the third highest volume on record. At the same time, the UK imported more than 2m vehicles, or 86% of the 2.37m vehicles sold there last year, with the majority coming from Europe.

However, there is concern that additional customs requirements could push up costs and compromise efficient processing, leading to greater complexity in the movement of vehicles in and out of ports.

The UK’s ro-ro ports handle the majority of the nation’s trade with the EU and have been working on resilience planning to mitigate possible cross-border disruption. However, as Finished Vehicle Logistics went to print, there was still no clear sign that the UK would leave with a deal and the British Ports Association (BPA) said there were concerns about the level of preparedness for a no-deal exit in the wider logistics sector, though it said the government had been working productively with the ports sector on dealing with potential disruption.

Uncertain relationsOne of the UK’s biggest port operators, GBA Group, says that Brexit dominated planning discussions with its OEM customers through last year. The operator has seen arrival and delivery profiles distorted by Brexit uncertainty and other regulatory changes, including the introduction of the WLTP vehicle emissions regulation, which has also affected dwell time at its port operations across the country. That has contributed to uncertainty in relation to the accuracy of volume plans together with demand fluctuations generated by “the reactive diversion of market channels”, according to the company.

However, GBA has been preparing for whatever Brexit looks like, in part by extending its customs and tax services with Authorised Economic Operator (AEO) status. AEO status is the standard authorisation issued by customs administrations in the EU and certifies that a business has met certain standards in relation to safety and security, as well as systems to manage commercial records. Only a few companies in the UK have AEO status but it makes it easier to establish special agreements with customs.

Cale Judah, managing director at GBA, is positive about the outlook, therefore. “Whilst Brexit will bring many challenges and, of course, opportunities, the efficiency of European port transhipment routings defined by geographical and market proximity will remain – even where the political backdrop differs,” he says. “In the long term, trade from non-EU countries may improve as direct trade agreements are negotiated.”

GBA works across the major UK vehicle handling ports (see table on page 42) and has expanded services through 2018 in response to demand at its operations on the Humber and in the south of the UK. That activity includes a new vehicle preparation centre for BMW and the expansion of vehicle handling space for VW Group in the Humber. It also opened a multi-marque pre-delivery inspection (PDI) centre at its Humber operation last year. GBA has also redeveloped and expanded operations at the port of Sheerness for VW Group.

Last year, the GBA Group handled a total of 1,100,710 vehicles through its port facilities, a drop of around 4,500 on the previous year, thanks in part to the fall in demand for diesel cars across Europe. Nevertheless, it handled 1.85m vehicles across all of its facilities, including inland, and in 2019 it will handle its 25 millionth vehicle since records began.

GBA’s innovation arm – GBA Technologies – has also been investing in new technology to improve processing through its terminals. These include GBA DaaS, a tool designed to support Suzuki’s E2E Tracking and Forecast System with live GBA data (E2E refers to the exchange of information or transaction by websites). 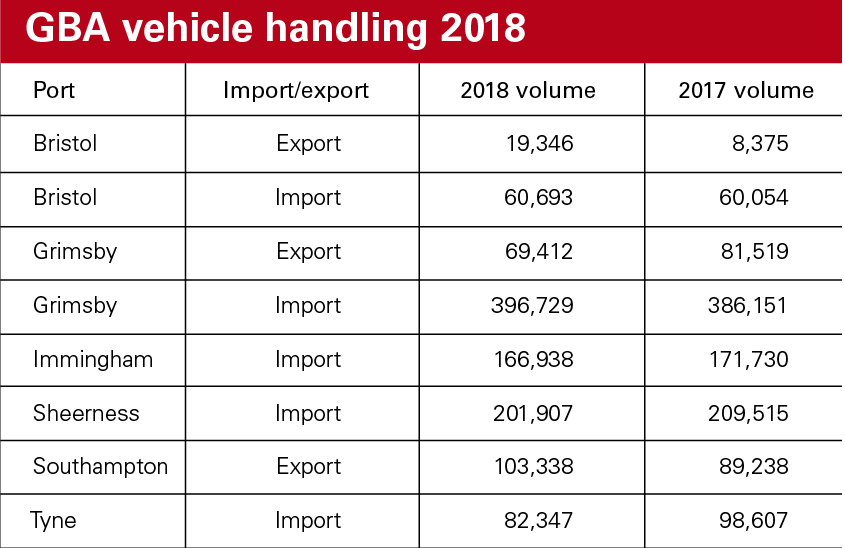 Looking ahead into an uncertain year, Judah says GBA expects volumes to plateau mid-term and return to growth thereafter as customer confidence returns. There is also likely to be more market consolidation in the short term that will be of benefit to the OEMs.

“We are anticipating steady and continued volume growth in the next three to five years across the majority of our customers, with a rebalance in the import/export ratios for certain OEMs that have traditionally produced domestic product in the UK,” says Judah.

“The demand switch from diesel to hybrid and electric technology will see a tick-up of imports for those OEMs best placed to answer the demand with volume-engineered platforms.”

Extreme fluctuations at BristolTechnology has also been contributing to confidence at the port of Bristol. Tony Dent, director of automotive trade at the Bristol Port Company, says the company is confident that its systems and operations will continue to operate smoothly and efficiently after Brexit.

“We expect that any additional administrative burden will be kept to a minimum and further mitigated with the use of technology,” says Dent. “Bristol Port’s overall trade, including non-car-related, currently comprises 65% non-EU and Bristol is predominantly an importing facility. We expect activity levels to increase in the years ahead – whatever the final Brexit outcome.”

“This has enabled us to obtain a zero-rated Customs Comprehensive Guarantee along with an extension to our temporary storage areas,” he adds.

In terms of physical infrastructure, Dent says Bristol has recently developed a new area to offer additional car storage at Royal Portbury Dock, which provides space for an additional 3,500 vehicles. Further surfacing is about to start on another site with 1,800-unit capacity.

Volume fluctuations through Bristol have been “quite extreme” over the last year, confirms Dent. The decline in diesel vehicles and reduced markets in the UK have adversely affected imports, though exports have remained relatively strong over 2018. Dent says there was no congestion as a consequence of the WLTP regulation.

Looking for clarity on the TyneJoining a chorus of voices in the automotive and maritime sectors, the port of Tyne, in the UK’s north-east, is troubled by the continued uncertainty over Brexit and says it would welcome clarity from the government on future trading arrangements, free ports, tariffs and free zone corridors. 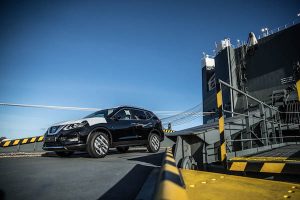 “The port continues to lobby for an even playing field in relation to Brexit funding for ports and in supporting the creation of free ports and free trade zone corridors,” says a spokesperson.

Tyne is in the final stages of securing its AEO status and says it will continue to strengthen its relationship with Nissan, supporting the carmaker’s future growth, though Nissan has cancelled plans for X-Trail production at the Sunderland assembly plant.

Nevertheless, Tyne port handled 526,000 vehicles last year for Nissan and VW Group, including 372,000 exports. It is looking to invest in extending its handling capacity and is the closest port to the International Advanced Manufacturing Park (IAMP), a £91.9m project planned for land to the north of the Nissan factory in Washington.

“It will be an international location for advanced manufacturing and European-scale supply chain industries and will maximise links with Nissan and other high-value automotive industries,” says the port’s spokesperson.

The port is also a member of the North East Automotive Alliance (NEAA) an industry-led cluster group established to support the economic sustainable growth and competitiveness of the sector in the north-east of England.

[mpu_ad] The NEAA is the largest automotive cluster in the UK and one of the fastest-growing clusters across Europe, according to Tyne’s spokesperson.

Tyne has also developed more storage space during 2018 with an additional site set up to provide vehicle storage for the Lookers car dealership group.

In addition, Tyne is providing container freight and warehouse storage for inbound parts for Nissan Motor Manufacturing and Komatsu Europe, based in Gateshead.

Looking ahead, Forth Ports has received consent from the government to expand at the port of Tilbury, near London. It will build on a 61.5-hectare site to be called Tilbury2, next to the existing 376-hectare port at Thurrock, to the north-east of Greater London.

The £200m investment in the brownfield site will include new rail and road connections, storage areas for vehicle imports and exports, a deep-water jetty, a floating pontoon, and a ro-ro terminal for containers and trailers going to northern Europe.

ABP ports, another of the UK’s leading port groups, did not provide any comment for this year’s ports survey.

Looking into Brexit from Europe 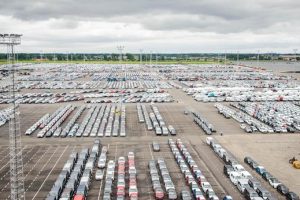 Whatever deal is struck between the UK and the EU (if one ever is), the consequences are not just going to affect UK port operators and a number of major ports trading vehicles with the UK have expressed their concerns and talked about plans for the future. Some have also suggested that they could benefit.

Europe’s biggest vehicle handling port, Zeebrugge (pictured), says it is preparing for the worst but hoping for the best. With that in mind, it has recruited more customs personnel and developed a new PCS (port community system) platform.

“Regular meetings were organised with border control services and the private sector. The awareness of all stakeholders was created so that all parties in the logistics chain are prepared for a hard Brexit,” says the port spokesperson.

The port says a contingency plan will guarantee a smooth change in the port of Zeebrugge and a continuous flow of the trucks and trains that are moving in and out of it with new cars.

However, it also highlights uncertain factors affecting trade between UK and the EU. These include the exchange rate between them, which has an influence on the buying power of UK citizens and also investments or disinvestments, like Honda’s decision to close its plant in Swindon after the current model year of the Civic and Nissan’s decision to cancel X-Trail production in Sunderland – measures that will change trade patterns.

At Cuxhaven, Rhenus Logistics says that together with its customers, shipping companies and partners, as well as customs authorities, it is preparing for Brexit by extending storage areas at the port. In addition, Cuxport’s IT system has been updated and augmented to facilitate electronic data interchange (EDI) with customs and employees trained accordingly. That said, Rhenus does not expect there to be a severe impact on its business because most of the trade to the UK from Cuxhaven consists of unaccompanied trucks.

Chaos without a dealThe port of Antwerp says it does not anticipate being heavily affected by Brexit in terms of finished vehicle trade with the UK because that is not a big part of its overall maritime traffic. However, the port authority also says that overall, the UK is the second-largest maritime partner country for it and circumstances do not suggest a positive outlook for the port or for the companies based there. In fact, it says that any small or medium sized company in Europe is going to be affected.

The port says that in the event of a hard Brexit without any deal on the table, there will be no period of transition – and therefore some chaos.

“We welcome a postponement of the Brexit date, in order for the customs authorities and the Federal Agency for Food Safety to have more time to increase capacity,” says Antwerp’s spokesperson.

However, the port is not relying on wishful thinking and has appointed a representative in the UK to report back on all Brexit-related matters.

“We do feel that companies are interested to relocate their European distribution facilities from the UK to the European continent and to the Flanders region in particular,” says the port spokesperson. “Furthermore, we expect more direct cargo flows between Ireland and the port of Antwerp.”