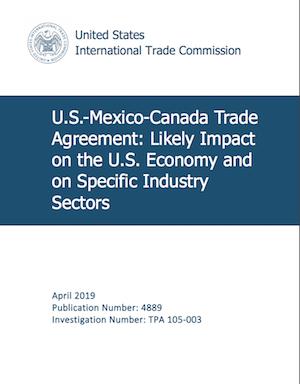 The proposed United States-Mexico-Canada Agreement (USMCA) is likely to lead to an increase in automotive components production within the US, which will also increase the automotive sector’s net employment by more than 28,000 full-time jobs, according to new report from the International Trade Commission (ITC) looking into the likely effects of the trade deal on the US economy.

However, those gains would be partly offset by a small decline in US vehicle production because of consumer price increases, which are expected to affect demand. Automotive parts may become more expensive and some carmakers have hinted they may stop manufacturing some models in North America to avoid the expense of complying with USMCA’s new rules.

Compared with the Nafta free-trade agreement, which USMCA is designed to replace, the ITC says the new accord will:

The 375-page report reveals that vehicle manufacturers are reviewing ways of adapting their Nafta-compliant business models and supply chains to USMCA. Some OEMs believe full compliance for all of their models is achievable with few changes to their supply chains. Others however, are reported to have expressed concern that the provisions would be much more challenging for their suppliers, and could lead to higher prices.

Meanwhile, others are concerned that their vehicles, developed at least three years before production, will not be compliant within the three-year staging period, and are seeking an extension.

“In addition, some manufacturers have stressed that the provisions have created significant cost burdens on their current North American operations,” the report goes on. “They have suggested the possibility of shifting production for some models outside of North America instead of making the substantial investments to their operations needed to make USMCA-compliant vehicles.”

Jobs through reshoringNevertheless, the ITC foresees some positives from the new rules-of-origin proposed for USMCA, with jobs being generated through an increase in the production of core parts, including engines and transmissions, as companies seek to reshore. The rules would also lead to an increase in the industry’s capital expenditure on facilities that produce the core parts in the US.

However, there could costs elsewhere, the ITC cautioned, as the rules-of-origin may lead to more costly sourcing of core parts, causing car and light truck prices to go up or component makers to subtract the higher costs from profits.

“Even manufacturers that do not experience a direct increase in their production costs would probably respond to the rising prices of their foreign and domestic competitors by raising their own prices slightly, thereby marginally increasing their profits,” says the report.

“Further, some manufacturers may choose not to offer vehicles that would be too expensive to bring into compliance, which ultimately would lessen consumer choice,” the ITC commented.

Labour value contentReferring to other new rules proposed under the USMCA, the ITC stated: “According to industry representatives, the longer a manufacturer has been producing vehicles in North America, the better situated it is to meet USMCA RVC [regional value content] and LVC [labour value content] requirements.”

Labour value content is a new factor introduced for USMCA and covers high-wage material and manufacturing costs, high-wage research and development and IT expenditures, and a credit for using a qualifying engine, transmission, or battery plant paying a wage of $16/hour in North America. LVC must equal 40% of the manufacturing costs for cars and 45% for light trucks.

However, the commission also warned that parts manufacturers do not have the compliance staff necessary to demonstrate to manufacturers that they meet RVC or LVC requirements and will need to hire staff and develop new compliance processes. It said that toward this end, industry and government have been working to standardise the certification process.

The proposed RVC rules for USMCA state that 75% of a car’s or light truck’s parts must be manufactured in the US, Mexico or Canada by 2023, up from the 62.5% stipulated in Nafta.

The report, entitled The United States-Mexico-Canada Agreement: Likely Impact on the U.S. Economy and Specific Industry Sectors is available on the USITC’s website at https://www.usitc.gov/publications/332/pub4889.pdf