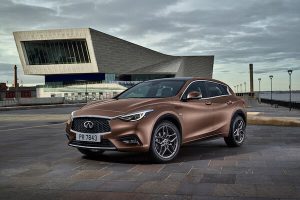 Nissan is to cease assembly of its Infiniti luxury brand in the UK as part of a wider restructure that includes withdrawal from Western Europe, in order to focus on its largest growth markets in North America and China.

Production of the Q30 and QX30 at the Sunderland plant in north-east England will end in the middle of this year.

“Plant management will discuss any impact on the plant with employees and their representatives,” the Japanese OEM said. Media reports suggest fewer than 300 workers will be affected.

The Press Association news agency quoted Steve McLennan, head of Infiniti Europe, as saying: “The commercial reality for Infiniti in Western Europe is that there is simply no visibility of a viable and sustainable business, either currently or in the years to come.”

The Sunderland factory is reported to have produced about 12,000 Infiniti models last year, well short of the 60,000 targeted output.

The Financial Times newspaper quoted British member of parliament Sharon Hodgson, whose constituency includes the Sunderland plant, saying that the decision was hugely disappointing and the result of poor sales throughout Western Europe as Infiniti models struggled to compete with other premium cars in Europe. The region’s luxury car market is dominated by German brands Audi, BMW and Mercedes-Benz.

The Infiniti announcement comes just weeks after Nissan confirmed it would not make the next-generation X-Trail at Sunderland as previously planned, but would instead supply the European market with the crossover from its Kyushu plant in Japan.

“I was assured that this [Infiniti] announcement is not a reflection on the performance of the plant, nor related to the recent X-Trail decision,” Hodgson was quoted as saying.

Sunderland will continue to make Nissan’s Qashqai SUV, the best-selling British-made car worldwide, as well as the Juke and the group’s Leaf electric vehicle.

The withdrawal of Infiniti production from Western Europe in early 2020 has ramifications for the retail side of the business. The company says it will work with dealers to conclude end-of-franchise agreements and provide the support services necessary to ensure a smooth transition.

“Infiniti’s retail operations are to remain operational until a tailored transition plan is put in place for continued aftersales services, including vehicle servicing, maintenance and warranty repairs,” the company added.

As the first step, Infiniti is working to find alternative opportunities for affected employees, including transition and training support.

Key components in the company’s global restructuring plan include electrifying its portfolio from 2021, discontinuing diesel-powered vehicles and concentrating resources on its biggest opportunities.

“The company will place more focus on its SUV line-up in North America, bring five new vehicles to China over the next five years, work to improve quality of sales and residual value, and realise more synergies with Nissan Motor Company. This is all part of Infiniti’s vision to become a top challenger brand in the premium segment,” it said.

The company added that the reorganisation would have no impact on operations in Eastern Europe, the Middle East or Asia, which continue to grow.

“Infiniti and Nissan Motor Corporation are confident in this restructuring plan for the long-term vision and success of the brand, for its employees, customers and shareholders,” Infiniti stated.

The company’s move is not dissimilar to the restructuring announced by compatriot Honda in mid-February, which included an end to making the Civic Hatchback and Civic Type R at Swindon in southern England in 2021, in part to maximise capacity utilisation at plants in Japan.