No-deal Brexit is not an option for UK automotive, says SMMT

With just under a month to go before a new prime minister for the UK is announced, a no-deal Brexit has not been ruled out by either contender for the job. However, leaving the EU without a deal at the end of October this year could bring crippling disruptions to the automotive sector and wider consequences for the UK economy as a whole, according to the Society of Motor Manufacturers and Traders (SMMT). 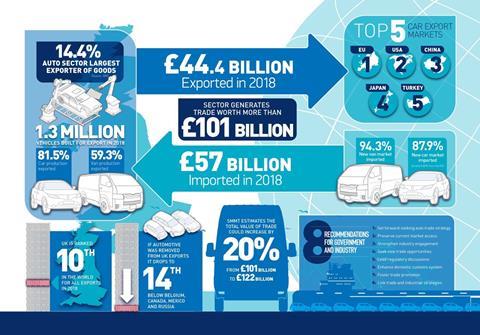 Any destabilisation of the sector could also jeopardise investment to scale up new energy vehicle (NEV) technology and the infrastructure needed to support it. Given that surface transport contributes a quarter of the UK’s emissions of CO2, undermining the transition to electric and hybrid vehicles could in turn jeopardise the UK’s commitment to a net zero pollution target, which was approved in the lower chamber of Parliament on Monday this week.

Speaking at yesterday’s International Automotive Summit in London, Mike Hawes, CEO of the SMMT, pointed out that while the UK government is the first in the world to commit to a net zero pollution target, the automotive sector had been committed to it for a number of years already. What was needed now, he said, was government support in turning consumer interest into consumer demand through the long-term incentives, “including fiscal support that recreates the right conditions to invest”.

Brexit already impacting industry
Investment in the UK automotive industry, however, has suffered because of the uncertainty over trading conditions after Brexit. According to SMMT figures released earlier it almost halved last year, falling 46.5% to £588.6m ($770.5m). That uncertainty has continued through the initial March 31 deadline for leaving the EU this year.

“In April we saw factories closed, needlessly as it turned out,” said Hawes. “Millions of pounds are being wasted in preparations which may or may not be used, jobs are being lost and investment has stalled. Above all, global OEMs are losing confidence and patience with the industry in the UK.”

The prospect of these problems being compounded by a no-deal Brexit that would lead to tariffs on imports and exports, and potential delays to the movement of parts and vehicles, would be devastating for the UK car industry.

“Brexit remains the clear and present danger,” warned Hawes. “We need frictionless trade. Competitive just-in-time manufacturing demands it. If we have production stops [because of delays] at the border, for every minute that will cost manufacturing £50,000 [$62,875].”

Combined with World Trade Organization (WTO) tariffs, which for passenger cars alone amount to £4.5 billion a year, it would deliver what the SMMT called “a knockout blow to the sector’s competitiveness”.

The automotive industry in the UK currently accounts for 14% of the country’s total exports – the single biggest contributing sector and worth more than £44 billion last year – and Europe takes half of those exports.

“Add in the other markets with which we have a preferential trade agreement as a result of EU membership, and around two-thirds of our total trade is based on preferential terms and not WTO [rules],” said Hawes.

EU boosts UK automotive growth
Figures included in the SMMT’s 2019 UK Automotive Trade Report, released this week, show that trade within the European single market and customs union had helped the value of automotive trade to rise by 118% since the global recession, from £47 billion in 2009 to £101 billion in 2018.

According to the SMMT, over the same period car production increased by more than half, with over eight in ten vehicles bound for export – the majority to the EU. There are 3.3m cars traded between the UK and EU each year, while the UK exports £5.2 billion worth of components and £2.9 billion of engines to the continent. At the same time the automotive sector adds £18.6 billion to the UK economy.

Hawes said that the introduction of tariffs would put a further financial burden on the industry and the consumer (potentially adding £1,500 to the cost of a new car), as well as reducing choice and undermining the business case for the automotive industry in the UK.

With the right deal, however, backed by the impetus to maintain a competitive business environment through collaboration with industry and an automotive-focused trade strategy, trade value could increase. According to the SMMT’s report full utilisation of manufacturing capacity could lift the UK’s trade value by 20%, worth £20 billion. Furthermore, while damage has already been done since 2016 because of the uncertainty over Brexit, the fundamentals of the sector remain strong and the UK has a global reputation for strong brands, said Hawes.

“Whenever the new prime minister is decided and steps into Number 10 [Downing St], he will have the opportunity to set the economic and trading conditions that will help us recover,” he added. “We need a long-term deal with the EU that guarantees frictionless trade and supports new trade links with the rest of the world.”