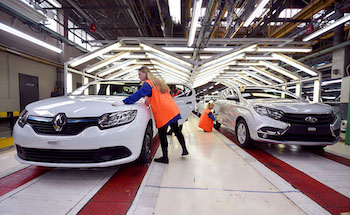 Russia exported vehicles and parts worth $3.38 billion last year, an 11% increase compared with 2017, according to new research from the Russian analytical agency Auto News.

Information from Russia’s Industry and Trade Ministry indicates that the majority of export sales remain within the Commonwealth of Independent States (CIS), and only 32% of exports went to other countries last year. The main markets for vehicle exports from Russia were Belarus, Kazakhstan, Ukraine, Uzbekistan and Azerbaijan (all CIS), followed by Algeria, Czech Republic, Cuba and Latvia.

The main exporters from Russia, according to the ministry, are Avtovaz, Renault, Hyundai, Volkswagen, Gaz Group and Toyota. Denis Manturov, trade and industry minister, said Avtovaz had achieved remarkable progress in foreign exports, with 38,000 vehicles transported, an increase of 57.5% on the previous year.

The REC said that Russian assembly plants plan to increase supplies to the traditional CIS countries and new markets of Asia-Pacific, Latin America and Africa.

Obstacle to progress? However, high customs duties and excise rates, as well as the impact of sanctions on Russian imports remain obstacles for Russian vehicle exports, according to Manturov. Russia provides state aid in the form of subsidies to alleviate this, but according to Auto News the government has not paid all of the logistics subsidies it promised to do in 2018, the reasons for which are unclear. As a result, some export projects appear to be loss-making, with no significant changes forecast for 2019. That means numerous export projects could be cancelled, warned Auto News.

Russia’s carmakers are clear that state support plays an important role in their export operations. It is an effective measure and Avtovaz, for one, is hoping that support will be maintained in 2019. Nissan said support allowed Russian-made products to be competitive in the international market, but there is no clarity on whether the logistics subsidies for exports will be maintained after 2019.