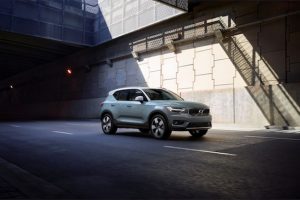 Volvo Cars’ profitability suffered in the first quarter of this year as a result of tariffs, increasing costs and greater pricing pressures, especially in China. Yet the carmaker increased sales and market share while the purchase of new cars declined across the world.

In the past 12 months the automotive industry has had to contend with the fallout from a US-China trade war, which has featured higher tariffs on auto parts and finished vehicles plus more expensive steel and aluminium, two key inputs, after Donald Trump imposed levies on imports of those metals into the US. More protectionist measurements by other governments have complicated the scene.

Last year the company said it would move production of its XC60 SUV for the US market from China to Europe to avoid Washington’s duties on Chinese imports but would continue producing in China for other markets. Last month it started production of the XC40 (pictured) in a manufacturing plant in Luqiao, south of Shanghai, which is owned by its Chinese owner Geely and operated by Volvo Cars.

As for the first quarter of this year, Volvo said the higher costs caused by tariffs contributed to its bottom line shrinking by 21.5% to 2.01 billion Swedish kroner ($216m), compared with the same period last year. Yet turnover increased 10.7% to 62.9 billion Swedish crowns. CEO Håkan Samuelsson said: “We grew in all regions gaining market share while revenue rose faster than sales due to our product mix.”

On China, Volvo commented that a slowing economy and trade tensions weighed on consumer sentiment and demand.

In Europe, the Stockholm-headquartered company said new car registrations were down mainly because of declines in Italy, Spain and the Netherlands.

In the US the overall market’s fall was driven by weak passenger car sales.

Russia, Canada and South Korea being its largest markets.

Looking ahead, CEO Samuelsson said: “We plan to continue growing and increasing our market share utilising the strengths of our all new product portfolio, despite the uncertainties around the global economy and trade tariffs negatively influencing the car market. Consequently, margins will continue to be under pressure, which is why we are intensifying our focus on synergies and cost-mitigating actions.”

Among Volvo’s business developments during Q1 was deciding to invest in a new paint shop at its Gothenburg assembly plant to reduce the location’s energy consumption and emissions by at least a third.