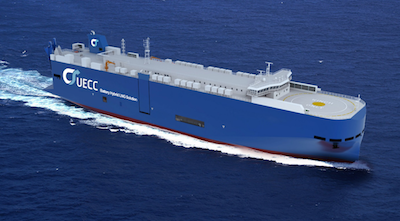 The first vessel is planned for delivery in 2021, and UECC has options for two more PCTCs.

Features include a fuel system, which UECC says will more than meet the International Maritime Organization’s (IMO) target of a 40% reduction in carbon intensity by 2030.

The ships will have a car-carrying capacity of 3,600 units on ten cargo decks, two of which are hoistable. That will make the vessels extremely flexible, enabling them to accommodate many high and heavy, and break-bulk cargoes, said UECC, jointly owned by Nippon Yusen Kabushiki Kaisha (NYK) of Japan and Sweden’s Wallenius Lines.

Thanks to some of the latest energy-efficiency innovations, UECC of Norway says the ships will meet IMO’s nitrogen oxide (NOx) emission limitations coming into force in the Baltic and North Sea from 2021.

In respect of tougher CO2 reduction regulations becoming applicable at the same time, the carriers will also be equipped with dual-fuel LNG-battery hybrid engines for main propulsion and auxiliaries.

Arguing that LNG (liquified natural gas) reduces CO2 emissions by about a quarter, the company’s head of ship management, Jan Thore Foss, said: “UECC’s experience with LNG PCTCs has been very good and there was really no other alternative for us.”

The battery packages will make the vessels even more environmentally friendly by further cutting CO2 emissions.

“We are investing in the future,” commented CEO Glenn Edvardsen, who also said: “This is a giant leap towards decarbonisation, and unlike anything else that has been done previously in our industry, I believe, and something that we are extremely proud of.”

Looking further ahead, as more biofuels are set to become commercially available, UECC intends to use carbon neutral and synthetic fuels in its fuel mix. “In our strategy we take a long-term view, and that’s why we go for a battery-hybrid-LNG-fuel solution in our new builds,” said Edvardsen.