Porsche warns Brexit could force prices up in the UK 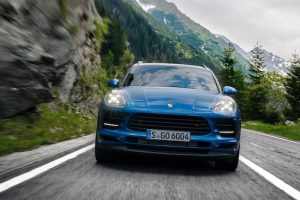 Porsche has warned its customers in the UK that they could face a 10% hike in the cost of cars delivered after the Brexit deadline, as a result of the duties that may be imposed.

“As one potential outcome of the Brexit negotiations, there is a possibility that a duty of up to 10% may be applied to cars imported into the UK by us after March 29,” said the carmaker in a statement this week. “In light of this, we have chosen to inform customers whose cars are likely to arrive after Brexit occurs that they may be affected by this tariff – allowing them to be fully informed at the point of sale and, if they wish, to adjust their order accordingly.”

Porsche said it was a precautionary step, should the situation arise, adding that it would not affect customers who had placed deposits on or before January 17 this year.

Porsche said it sold 12,500 vehicles overall in the UK last year, which along with the Macan included the 718, 911, Cayenne and Panamera. All of those vehicles are imported from Europe. Overall, around 86% of the vehicles sold in the UK are imported, with the majority coming from European factories. UK new car registrations fell 6.8% in 2018 to 2.37m units, according to figures from the Society of Motor Manufacturers and Traders (SMMT).

A number of carmakers have issued warnings as Brexit gets nearer about leaving the UK because of the potential rise in manufacturing costs due to tariffs on parts imports and because of the cost of exporting vehicles from the country (Honda’s decision this week to leave the UK demonstrating that these are not just idle threats). But there have also been concerns for those exporting from Europe into the UK because of potential finished vehicle tariffs.

The SMMT said recently that should the UK have to resort to trade with Europe under WTO rules, it could add around £5 billion to the cost of trade, something that was nowhere near the preferential trading arrangement UK manufacturers currently have or need to remain successful.

“It would add to the average cost of a car sold in the UK, just on tariffs alone, £1,500 per car, if those costs were passed onto the consumer,” it stated. “Inevitably, that would affect demand, profitability and jobs.”