Construction has officially begun on a major expansion of France’s port of Boulogne Calais, one of Europe’s busiest gateways for ferry and ro-ro traffic, and the major port for the exchange of goods between the European mainland and the UK. The €863m ($970m) project, dubbed Calais Port 2015, will double capacity at the port by the time new ferry and ro-ro berths come into operation in 2021.

The expansion coincides with announcements by the French government to close the makeshift refugee camps that have grown near the port, known as 'The Jungle', and which has led to logistics disruptions.

The expansion of the port of Calais is aimed at meeting expectations for growth in traffic across the English Channel, mainly via its link to the port of Dover in south-east England. The port of Calais Boulogne forecasts that cross-Channel traffic will grow by 40% by 2030.

Automotive freight is already a major and growing commodity in cross-Channel trade between Calais and the UK, with at least 200,000 trucks related to automotive parts per year moving by ferry in both directions, according to Franck-Edouard Tiberghien, who leads lead strategic business development at the Société d’Exploitation des Ports du Détroit (SEPD), which was awarded a 50-year concession to manage the port last year. The port also hopes to regain finished vehicle business, which was once significant at Calais before the loss of a major contract last year.

As a public-private investment, including nearly €100m from the European Union’s Connecting Europe Facility, Calais Port 2015 is an important part of the EU’s objectives to improve transport infrastructure and contribute to a shift in freight transport from road to more sustainable modes including water and rail transport. Earlier this year, SNCF Logistics' subsidiary, VIIA, launched its VIIA Britanica unaccompanied lorry semi-trailer service between the port of Calais and Le Boulou near the Spanish border.

The current expansion project has nevertheless begun at an auspicious time for the port and wide region. The investment and construction, which has been discussed since 2002 and was officially confirmed in summer 2015, comes on the heels of the UK’s vote to leave the European Union in June and upcoming negotiations to determine the country’s future trade and immigration policies with remaining EU member states. The extent to which Brexit might impact future trade between the UK and EU is as yet unclear, and could dampen future growth expectations for cargo and passengers.

The port of Calais has also been a focal point in Europe’s ongoing migrant and refugee crisis, with as many as 10,000 people currently staying in the Jungle. Many refugees here have made repeated efforts to gain passage to the UK, often by climbing into the back of cargo trucks headed for the UK. The incidents have contributed to considerable disruption of ferry and rail traffic across the English Channel, including for automotive freight and finished vehicles. In early September, truck drivers held protests and ‘go slow’ strikes at the port, calling for the camp to be closed.

However, SEPD, the port of Calais and the French and British governments are investing considerably in securing operations at the port of Calais. Tiberghien told Automotive Logistics that €20m has been invested in security over the past two years; the expanded port will include further security measures to protect equipment and drivers.

With French presidential elections looming next year, the government is also looking to take a tougher stance. On the same visit that French president François Hollande made on September 26th to lay the first stone at the Calais Port 2015 worksite, he announced plans to permanently close the Jungle by the end of this year and disperse migrants seeking asylum in France across the country.

Meeting future needs, including for automotive

Calais Bourgogne, along with the nearby port of Dunkerque, on the northern French coast, are the most significant shipping and cargo-handling points for cross-Channel trade. Calais is Europe’s largest passenger port, with 10m people per year using its ferry services, and it is the continent’s second largest ro-ro port, with around 2m trucks moving in each direction between France and the UK by ferry. Last year, Calais Bourgogne handled 41.5m tonnes of freight.

According to the UK’s Freight Transport Association (FTA), around £89 billion ($115 billion, €102.5 billion) worth of UK trade passes through Calais every year; over the past two years, cross-Channel trade between Calais and Dover has increased by 20%, according to the association.

Automotive freight is an important commodity for Calais. According to Tiberghien, SEPD estimates that around 6% of outbound trucks from Calais to the UK are filled with automotive parts, or around 125,000 trucks per year. Although the company does not have exact figures for imported freight from the UK, he told Automotive Logistics that indicators from manufacturers and logistics companies suggest it is a similar amount. "We believe at least 200,000 trucks per year of automotive cargo move through Calais in total, so it is a huge volume for us," he said. "We are highly specialised in automotive parts."

One carmaker with major production in the UK, for example, moves around 500 lorries of freight from the continent to the UK every week.

Tiberghien added that these figures at Calais did not include automotive freight moving by rail in lorries via the Eurotunnel rail link from Calais, which also handles automotive cargo, including for Toyota UK production, among others.

The significance of automotive trade at Calais was made plain over the last year as a number of disruptions at the port, including strikes and impacts from migrants attempted to cross the Channel, lead to problems in automotive supply chains.

The port had previously also been important for finished vehicle traffic, however last year Gefco switched exports from PSA Group to the UK from Calais to the port of Zeebrugge in Belgium. "There lots of reasons for this, but one of them was because we are specialised in ferry traffic, and the finished vehicle business has shifted more to larger vessels to gain economies of scale," said Tiberghien. "Unfortunately, we also had some problems with migrants that contributed to losing that business."

However, vessel sizes and security are both major topics that the Calais expansion is set to address. Calais Port 2015 will be one of the most significant port and infrastructure projects in Europe; it will include construction of a 3km-long protective seawall and outer barrier, a new dock covering around 90 hectares, as well as a new secure parking area for heavy goods vehicles.

Three new ferry berths will be built, along with the expansion of a ro-ro berth. The development will also allow for the use of longer ferries, from 213 metres currently to 240 metres. A new terminal for intermodal transfers between road, rail and sea will be built.

The first phase of construction is expected to last until 2021. Tiberghien is confident that the expansion will offer the port further opportunities for both automotive parts and finished vehicles.

"Our new infrastructure is going to help secure the supply chain by rail and truck into the port of Calais, and will also expand our area for handling vehicles," he said. "We also still have shortest connection for ships to English ports, including to Ramsgate, to which Zeebrugge now has sailings."

Port Calais 2015 is the largest maritime development among the EU’s priority infrastructure investments. Public investment for the project accounts for €270m in financing and bridging loans arranged by the Hauts-de-France region, which owns the port; of that figure, €98.6m has come from the EU as part of the Trans-European Transport Network (TEN-T) from the budget of the Connecting Europe Facility, which supports infrastructure investments for international trade within Europe.

Private investment has come primarily through a bond issue of more than €500m by Allianz GI, and through financing by the European Investment Bank and Crédit Agricole Corporate investment.

Calais Boulogne is under public ownership by the Hauts-de-France region (a new entity since the beginning of this year that combined the Pas-de-Calais and Picardie regions). Last year, regional authorities granted a 50-year concession to SEPD to manage the port. SEPD’s shareholders include two long-term French investment funds, which each own 40%, with minority shares held by regional government bodies in the region and by the port of Dunkerque.

The same shareholders also own the Société des Port du Détroit, which been contracted specifically to oversee the €863m expansion and construction project.

Clearing away the Jungle

The port of Calais has been plagued by disruption over the past year by the growth of the nearby Jungle, despite repeated efforts by the French government to close or reduce the size of the migrant camp. Logistics firms and truck drivers have warned of increasing numbers of migrants attempting to get to the UK.

On the occasion of his visit to the opening ceremony for Calais Port 2015, François Hollande announced that the camp would be closed definitely by the end of this year. French authorities said that the asylum seekers would be dispersed to many different, smaller centres across France, where they will be given up to four months to apply for asylum in the country.

While Hollande said that the refugees would be removed, he emphasised that they would be protected as much as possible. He also called on the UK to “do its part”, despite having voted to leave the EU. The majority of the people in the Jungle are seeking asylum in the UK rather than France. 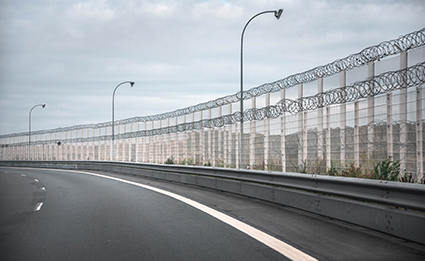 The British government has previously said that it would oppose applications for UK asylum from those migrants applying from France. It is not yet clear the extent to which migrants in France would be able to reach the UK; some are trying to join family members already there, including a number of unaccompanied children.

David Wells, FTA's chief executive, welcomed the plans now proposed by the French government. "The president has taken precisely the steps that FTA has been calling for since the start of the crisis in Calais,” he said in a statement.

"Prevention has to be better than cure – we are convinced that the decisive action to completely close the Jungle camp, register the migrants for asylum and strengthen the security for truck drivers is the best route forward," he added.

French authorities have made efforts to reduce the size of the camp before, including earlier this year, however migrants have continued to come. It is unclear whether dispersing the camp would prevent migrants from seeking passage to Britain, especially those seeking to rejoin family members.

Earlier in September the French and British government announced that they would build a £17m wall along both sides of the main road to the port in an effort to prevent people from trying to enter trucks. Plans for the wall are still set to continue.

The Calais expansion project includes further secure facilities, such as the construction of a waiting and parking area for more than 800 trucks.

The FTA has welcomed the new security measures, citing incidents of violent attacks by some migrants attempting to board trucks.

"Increased capacity and security is vital in this area,” said Wells. “Strengthened security by creating a new secure zone in the port will remove the threat to truck drivers once and for all rather than just tackle the symptoms.

"With the threat of attack on truck drivers removed we expect the juxtaposed controls to remain in place that speed cross-Channel traffic which will benefit both Britain and France."

Freight flows with Europe, infrastructure investment and Brexit will be among the topics that will be discussed at the inaugural Automotive Logistics UK conference that will be held October 5-6th in London. Click here for more details.