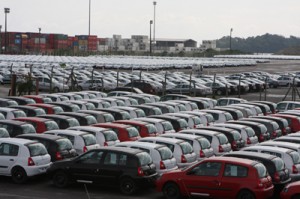 The number of finished vehicles that the Brazilian port of Paranaguá will handle in 2017 is expected to grow by 83%, compared to this year. Forecasts from operators indicate that around 163,000 units, taking both imports and exports into account, will pass through the port next year – some 73,000 more than in 2016.

However, the port emphasised that the forecast was based on existing contracts and did not take into account non-organic growth in the automotive trade.

The anticipated growth in traffic was down to two factors, said the secretary of state for infrastructure and logistics, José Richa Filho: investments made by the port authority, the Administração dos Portos de Paranaguá e Antonina (APPA), and the confidence Brazil’s automotive sector had in levels of efficiency at the port.

“The overseas market is extremely attractive for our assembly plants, given the exchange rate and the global economic situation,” he commented. “The Port of Paranaguá is well placed to look after this market quickly. For this reason, the expectation is that cargo movement in this sector will grow.”

New berthing ‘dolphins’ ­­– man-made marine structures extending above water level but not connected to shore ­– were inaugurated in the first half of this year at a cost of $19m. Used exclusively for loading and unloading finished vehicles, they have made the movement of vehicles more efficient and cut berthing times for vessels.

APPA president, Luiz Henrique Dividino, said that to date, around 69,000 units had passed through the port, with a further 19,000 units booked to arrive by the end of the year. In the first three quarters of this year, exports of vehicles were running at twice those of 2015. Last year, Paranaguá exported 28,400 units between January and September, rising to 56,800 this year.

“We have a huge amount of experience in this type of operation, which is very delicate,” said Dividino. “You need trained workers to have a zero damage rate in operations, given that the market is very demanding in this type of cargo.”