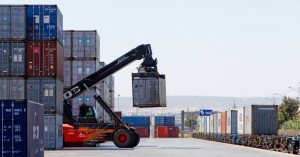 The Basque port of Pasaia (Pasajes) in Spain has begun handling its first Opel Mokka SUVs. In May, the Opel plant at Figueruelas (Zaragoza) announced that this year's production forecast for the model had been raised by 13,000 units.

Short-sea operator UECC has said that for 2014 the number of Mokka units channelled through Pasaia will be relatively modest, given that assembly began only recently. However, in 2015, Pasaia is expected to be handling significant volumes of this model.

Opel, for its part, has stated that, in 18 months, it has received orders for 215,000 units for customers across Europe. Full production of Mokkas at Figueruelas is now expected to be achieved in September, with the majority of parts and components to eventually be built in Europe, with 40% sourced in Spain.

Mokkas at Figueruelas are currently being assembled from complete knockdown kits initially built in South Korea, with Gefco managing the logistics chain.

Kits are loaded aboard Maersk container vessels at the Korean port of Incheon, arriving at the Port of Barcelona (or Valencia if necessary), with around 400 containers a month then transported by rail to the inland container handling facility Terminal Marítima de Zaragoza (TMZ). Block trains of up to 750 metres in length can be rostered.

On July 22, TMZ officially inaugerated a new 12,000-sq.m area built specifically to handle the additional Opel traffic, which will account for 20%-25% of the total container traffic there. The new extension brings the total operating area of the terminal to 37,500 sq.m.

From the inland port, now Spain's second busiest, the containers are moved by road by the Sesé Transport Group to a 30,000-sq.m warehouse at the El Pradillo industrial estate adjacent to the assembly plant, where they are stripped from the containers and stored. Sesé, which will oversee stock control, will move pieces and components to the plant in the following four to eight hours.

A team of some 50 employees receive inbound consignments at the plant, with the vast majority of the pieces moved directly onto the line, as part of a lean-manufacturing process.

Finished vehicles, finally, are moved to the port of Pasaia for export to destinations in Europe