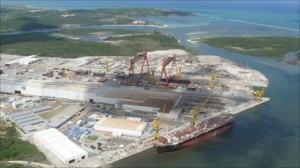 Vehicle exports through Brazil’s north-eastern port of Suape were all but quadrupled in the first half of this year, thanks to a switch in strategy by Fiat Chrysler Automobiles (FCA) and a recent expansion in storage capacity there.

Of the total in the first half of this year, 9,044 units were exported to Argentina and more than 14,485 exported to Mexico, Chile, Peru, Uruguay, Colombia, Panama and Costa Rica. Vehicles were handled on behalf of General Motors, Toyota, Fiat and Jeep.

Earlier this year, FCA switched to using the port for all its Brazilian north-eastern import-export business, while secure storage capacity for finished vehicles at the port has been expanded, as announced in 2014.

Evandro Avelar, the port authority’s vice-president, acknowledged the importance of FCA’s strategy switch and expansion of its storage areas from 3.7ha to 18.7ha, providing a capacity of 250,000 vehicles annually.

“As of this year, Fiat has begun to use its car carrier fleet to avoid under-utilisation,” said Avelar. “Car carriers leaving the manufacturing plant at Minas Gerais are bringing Fiat vehicles to the north-east. They unload at Suape, where they pick up Jeep cars produced in Goiana bound for the south and south-east,” he continued.

Poor connectionsNevertheless, serious problems remain in respect of Suape’s landside connections. Alluding to the poor state of connecting highways, Avelar said he would like to see access roads restructured to avoid delays to deliveries.

Renault is also reported to be in talks with the port of Suape, which it intends to use as its Brazilian export base. Currently, the manufacturer has a plant at Curitiba, some 80km from the port of Paranaguá, but is considering the move based on the lower tariffs Suape is offering.

If Renault does opt for Suape, the port would handle vehicles produced at the company’s plant at São José dos Pinhais, in the state of Paraná, which would arrive by road. It would also handle traffic inbound by sea from Argentina, which would form a return consignment for the road transporters heading back towards the south and south-east. The vessels used would be the same as those handling finished vehicles for FCA bound for Argentina.

Cheaper tariffs make Suape highly competitive, given that it costs on average just $6.58 to store each vehicle for up to 10 days at the car terminal.

“Suape currently has the lowest tariffs of all the large ports,” confirmed Bernardo D’Almeida, tax auditor of the State Treasury for the state of Pernambuco. “We made a reduction this year in order to make us a more attractive option for the export of vehicles from Brazil.”

The reduction of tariffs should ensure that Suape becomes Brazil’s fourth most important finished vehicles port. In 2015 alone, it boosted throughput by more than 246% compared to 2014, thanks mainly to Jeep, which has a plant in Goiana. Growth was also down to Toyota using it as a distribution centre and to the local manufacturing plant of Chinese motorcycle maker, Shineray.