A billion reasons to try 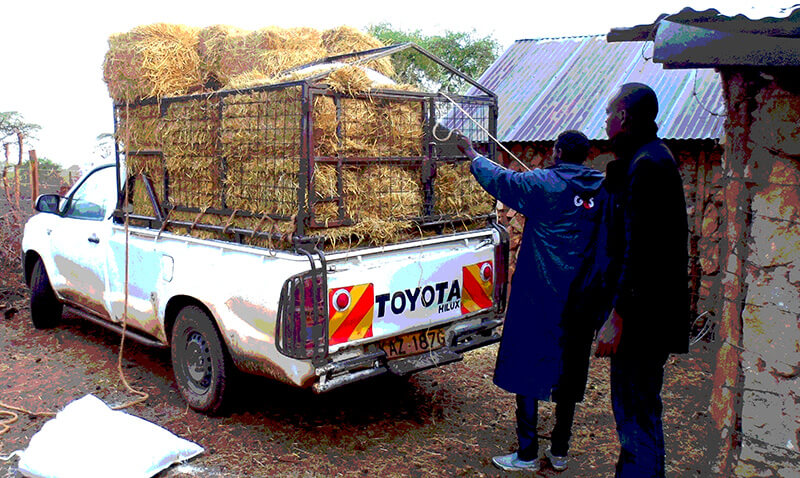 For the past ten years, a rising number of Chinese OEMs have appeared on African roads. Bearing cheerful names such as Geely, Chery, Hafei, Chana and Foton, some managed to land on their feet and build a healthy presence. Others, though, have gone down face-first.

Foton, a Beijing-based manufacturer that produces pickup trucks and delivery vehicles, entered Kenya in 2011. Foton had found Da Li, a Chinese national with a long history of doing business in East Africa, to front the project, which included an assembly plant in Nairobi. By 2017, however, Foton East Africa was forced into bankruptcy. Li himself was indicted for tax evasion and the production plant folded.

Earlier this year, though, Foton took control of the Kenyan operation directly, recapitalised the business and set out to reopen the production line. “This is our target market,” says Apple Sun, the new head of Kenya Foton, who acknowledges that poor sales in the face of fierce competition from imported used Japanese vehicles had a role to play in Foton’s Kenyan failure.

China’s vast demand for cars has led many manufacturers to treat offshore markets as an afterthought. Vehicles are often older models that are no longer produced, but Sun says Foton’s refurbished assembly line will instead focus on newer vehicles to regain its place. “We should bring our top-range products here. This is why we have made an investment of $2m,” he states. 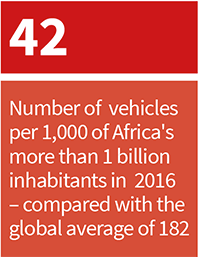 In choosing to assemble older models, Chinese OEMs have done themselves a disservice, because China’s car industry has come on in leaps and bounds and can compare with the best in the world.

“The best Chinese brands now produce cars that can, in pure ‘showroom appeal’ terms, compare with anything from Korea, Germany or Japan,” says Hannes Oosthuizen, customer experience manager at cars.co.za, one of South Africa’s largest vehicle trading platforms. “It is just that the Chinese brands take too long to get these new products to overseas markets.”

It’s easy to see why Chinese firms are interested in Africa. The continent is home to more than 1 billion people and an expanding middle class. Growth of personal transport is low, however, with only 42 vehicles per 1,000 inhabitants in 2016, compared with the global average of 182, according to data from the International Organisation for Motor Vehicle Manufacturers.

Chinese manufacturers also have to contend with quality-conscious consumers. Apart from well-built used vehicles from Europe and Japan, OEMs from elsewhere are also expanding their footprint beyond South Africa, their traditional foothold on the continent. For instance, during German Chancellor Angela Merkel’s recent visit to Africa, Volkswagen (VW) signed two memoranda of understanding with the governments of Ghana and Nigeria to assemble vehicles there.

VW is a familiar brand on African roads, going all the way back to the Beetle that was manufactured in Kenya in the 1960s. Today, of course, VW has a plant in South Africa, and many of its vehicles are among the half a million or so imported used cars that land on the continent each year.

VW South Africa, incidentally, provided the first ever western assembly line to China back in 1992 when the German parent signed a contract with China’s First Automobile Works to ship semi-knockdown (SKD) kits to a factory in Changchun, in the north-east. Over a three-year period, the South African VW plant in Uitenage, near Port Elizabeth on the east coast of South Africa, shipped 28,000 A2 Jetta SKDs to the Changchun plant (the SKDs were packed by Kar-Tainer). This turned out to be one of the formative experiences that led to China’s own eventual vehicle manufacturing industry.

[mpu_ad]Go AfricaA proliferation of Chinese assemblers is appearing in Africa. The most ambitious is BAIC, which recently opened its $834m assembly plant in Port Elizabeth. The BAIC facility is said to be China’s largest direct investment on the continent to date and will create 2,500 jobs. Port Elizabeth is responsible for more than 60% of the country’s automotive manufacturing.

BAIC International chairman Xi Heyi said in July, during a visit to South Africa, that the plant was to be a springboard for a wider African foray. “We have done our research,” Xi told the local City Press. “We have established a very aggressive and sophisticated marketing plan for South Africa.” BAIC already has 17 dealerships there and had plans to increase this to 27 by the end of 2018.

Xi made it clear that the company had wider ambitions, too. “Remember, our target is the whole continent of Africa. South Africa is only our gateway to the continent. We are going to compete with any product produced anywhere in the world. Our aim is to establish our own business model. We are not interested in chasing markets.”

Another aspiring investor is Great Wall Motors (GWM), based in Baoding, China. GWM moved into South Africa in 2010 and quickly became known for its range of cheap pickup trucks and cars. The Geely range has found a niche as an affordable workhorse for builders and contractors, while the Chery, a tiny hatchback, has appealed especially to vehicle rental companies seeking a budget model. GWM also has a premium brand of SUVs and sedans, Haval, which the company is now considering assembling in South Africa.

Golden oldiesFor Chinese carmakers – indeed all aspirants in the new vehicle market across Africa – used vehicles remain a formidable hurdle. Figures on imports are sketchy, but one study suggested that 300,000 used cars were shipped to Nigeria in 2014 alone. Two-thirds of these were more than ten years old.

“If African countries are serious about industrialisation, they have to put a stop to the dumping of cheap cars, especially those over five years old,” says Martyn Davies, MD of emerging markets and Africa at Deloitte South Africa.

In east Africa at least, assemblers may gain some relief from the competition of imports. The East African Community – a six-state regional economic union – is also mulling a limit on the age of used cars to a maximum of five years by 2021. If adopted, this will reduce the price advantage of second-hand vehicle dealers over new car dealerships.

Nigeria, too, is working – with Deloitte’s help – to develop policies that would sharply reduce imports of used vehicles, limiting these to newer models that will reduce the price gap with locally assembled vehicles.

"If African countries are serious about industrialisation, they have to put a stop to the dumping of cheap cars, especially those over five years old" - Martyn Davies, Deloitte South Africa

Meanwhile, Nigeria has issued almost 50 assembly licences, many to Chinese companies. Guanghzou-based GAC Motors, for instance, recently opened a production line in Lagos, producing SKD versions of its GS4 SUVs. “Nigeria, and Africa at large, has the potential to perform well for the automotive industry,” general manager of GAC Motors, Yu Jun, said in a statement. “We are willing to make the necessary investments to ensure our Nigerian customers – and those in the wider region – become familiar with our brand.”

Jun noted that while the regional market would be addressed at some point, GAC would concentrate on developing its brand locally for now. “We’ll first establish ourselves in the Nigerian market, then look to which others offer the best opportunity – Ethiopia, Algeria, Egypt, etc,” he stated.

Following the Silk Road Realistically, it is the major coastal economies such as Kenya, Nigeria and South Africa that can viably develop major vehicle production, according to Davies of Deloitte. Chinese assemblers are popping up in landlocked countries such as Uganda and Rwanda, but being landlocked and far from ocean ports is a logistics hurdle they cannot overcome.

China itself is providing indirect assistance to its vehicle-makers via a series of ambitious developments that will ease logistics in targeted African countries. For instance, in November, Mozambique opened the Chinese-funded, 3km long Maputo-Katembe toll bridge, officially the longest in Africa. The bridge cuts a six-hour journey from neighbouring South Africa to just 90 minutes, easing both passenger and commercial traffic between the two countries. 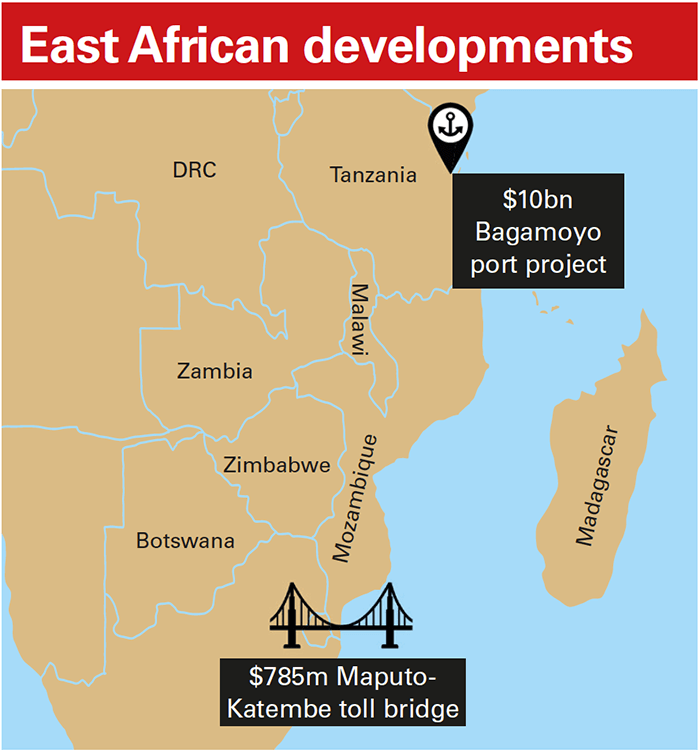 “At just $2.79 per crossing, it's going to take a lot of traffic to pay off the $785m that Mozambique borrowed from China to build Africa's longest suspension bridge,” says Eric Olander, a Shanghai based Africa-China analyst. “That said, it's a huge advancement for regional trade that really can't be overstated.”

The bridge is just the latest in China’s evolving African infrastructure drive. Even more ambitious is Bagamoyo port, now under construction in Tanzania. The $10 billion project will be one of the largest harbours in Africa and the centrepiece of a special economic zone expected to hold at least 700 businesses. Bagamoyo is part of China’s ‘Belt and Road’ initiative to create a trading and logistics superhighway across Asia, Africa and Europe. Ultimately, the initiative will see more ports, roads and rail across African countries.

Hoping to fly highAnother Chinese-funded scheme is the establishment of at least five transport universities in Africa. These will be training locals in all aspects of logistics, up to and including aviation pilots. Given that air is an important way to move cargo around Africa, these centres will certainly assist with skills development on the continent.

However, ‘Belt and Road’ should not be taken as a given, Olander says. China has experienced a slowdown in economic growth and there are rumblings among its leadership that perhaps the vast amounts of money it is soaking up could be used domestically, instead.

“Belt and Road sounded a like a great idea in 2013 when the geopolitical climate was much different than it is today. In this new era of slower Chinese economic growth, plus a trade war with the US, it may no longer make as much sense,” Olander says.

The advance of Chinese carmakers across Africa should also be viewed with caution, Davies adds. China has grown its vehicle industry at a cut-throat pace, with more than 100 OEMs fighting for sales in an increasingly competitive domestic market. This, he says, is one of the big reasons why so many are now setting up shop in Africa.

“They need to grow sales and it’s tough to do so in China where there are so many competitors. So they are trying to grow sales offshore,” Davies comments. He believes many of these companies will vanish in time, however. Much as western carmakers flourished for a while before either disappearing or consolidating into the handful of global giants we have today, the ambitions of Chinese OEMs in Africa may go unfulfilled.

"We are willing to make the necessary investments to ensure our Nigerian customers – and those in the wider region – become familiar with our brand" - Yu Jun, GAC Motors

Two further factors currently holding back China’s carmakers in Africa are a variation in safety standards and OEMs’ knowledge of consumer preferences in their target markets.

Only South Africa carries out crash tests, and even there they began only in 2017. However, the London-based Global New Car Assessment Programme (Global NCAP) and South Africa’s Automobile Association (AA) are working together to assess the various models released on the country’s roads.

The only Chinese car tested so far is the Chery QQ3, which was described in joint statement as “sub-standard and unsafe”.

“This is a life and death choice‚” says David Ward‚ secretary general of Global NCAP. “Such a poor result shows why it is so important for countries like South Africa to fully apply the UN’s crash test standards – which currently isn’t happening. A car like the QQ3 simply shouldn’t be on sale anywhere in the world.”

Still, as long as Chinese cars are cheap, they are likely to grow market share. And in time, China’s OEMs should learn and adapt to local market conditions better, too.

While attending the roll-off of the first vehicle from the company’s Port Elizabeth plant recently, Du Rong, deputy manager of BAIC International, appeared slightly bemused at the reception BAIC cars got from South African consumers.

“South Africans test the Bluetooth and play the music very loud,” he said. “That’s usually the first car feature they try out. They tend not to like the sunroof very much – maybe for security concerns.”