Blowing a bigger bubble at Zeebrugge

The world’s biggest vehicle handling port saw an increase in vehicle handling in 2019. It is speeding up throughput to keep pace using the latest technology and some major reconstruction projects 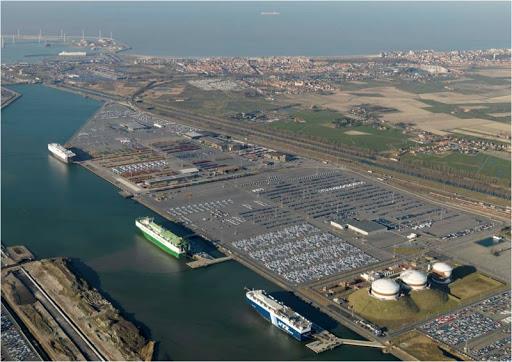 The port of Zeebrugge was closing on the 3m mark for the number of finished vehicles handled through its terminals when it got to the end of 2019, up 4.4% on the previous year (see table). That contributed to a 14.2% growth in overall freight volumes for the year at the port.

According to the port authority, the increase in throughput was in part thanks to the expertise of the workforce, with skilled staff at pre-delivery inspection (PDI) centres at all of the terminals. It was also down to developments in technology supporting a more sustainable industry, including the instalment of a charging infrastructure for electric vehicles (EVs). Terminal operator ICO has introduced a battery charging area at the Bastenaken terminal that includes 304 battery chargers with 11kWh each and two superchargers of 135kWh each.

The port has also completed the first phase in the rollout of its 5G network, which is designed to be used by a range of port-based companies for dispatching, track-and-trace systems, and critical group communication, among other things. The 5G network is aimed at speeding up innovation and automation in the port, including for Internet of things (IoT) applications, autonomous vessels, augmented reality (AR) and drones. 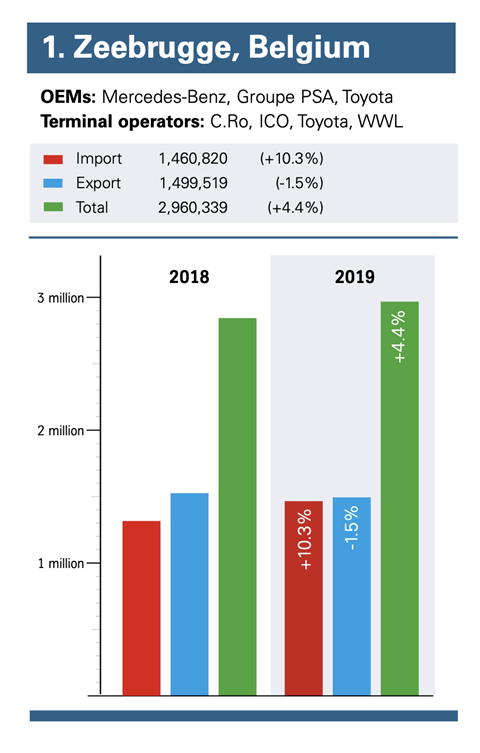 While the 5G network is currently being used for a range of activity in the outer port, the second phase of the rollout will include coverage of the inner port and will be implemented mid-2020.

“As a port authority, we want to stimulate the private partners in the port to apply the best innovative solutions in every part of the logistics chain,” said CEO Joachim Coens when the initiative was announced late last year. “The 5G technology will make this possible. We feel it is important that we act as an initiator and that we can provide this connectivity bubble for our port companies.”

Data ahead of departure
Work continued in 2019 on the rollout of Zeebrugge’s RX/Seaport data-sharing platform to deal with the expected increase in customs activities and other administrative formalities stemming from the UK’s departure from the EU. One of the aims of installing the RX/Seaport system is to limit the transit times of UK cargo flows through more efficient handling of formalities and the digitalisation of Brexit-related administration. That is now ready for all UK-related traffic and has been further developed to cover other Zeebrugge trade so as to make the platform a digital twin of the logistic networks connecting the port.

“The e-ferry application is ready to take off when Brexit takes places, likewise for the track-and-trace application,” says the port’s spokesperson.

Zeebrugge was not expecting major problems this year in its trade with the UK ports, though that was before the impact of the coronavirus pandemic, which comes on top of overall trade decreasing last year because of the general drop in cars sales in the UK.

Things could get more problematic from January 2021 onwards if the EU and the UK do not succeed in closing a comprehensive trade agreement, or at least a trade agreement covering automotive, and the disruption caused by coronavirus this year is likely to hamper progress on such an agreement. While it remains difficult to predict the consequences for Zeebrugge, the port says it is well prepared for Brexit.

“We were ready in view of the previous deadlines, and continue to be so for the final withdrawal,” continues the spokesperson.

Renovation and restructure
As has been the case in recent years, finding adequate space at the ports is a continual challenge and nowhere more so than Zeebrugge, given its growth in volumes through 2019. In meeting that challenge, Zeebrugge has been working on a number of infrastructure projects to add capacity and speed up processing.

The port authority has renovated the most seaward of its main lock doors at the Pierre Vandamme lock at a cost of €120m ($130.8m), something the port authority described as “a spectacular operation” given that the door weighs 2,500 tonnes. That operation is part of a larger-scale renovation project for the lock, which is the main access point to the Zeebrugge inner port, and will accommodate value-added logistics for the automotive sector, according to the port authority.

Zeebrugge is also building a new lock that it says is essential for optimising access to the inner port.

“The final preferential decision for the new lock on the Visart site was approved by the Flemish government in 2019 and preparations are continuing,” a port spokesperson confirms. 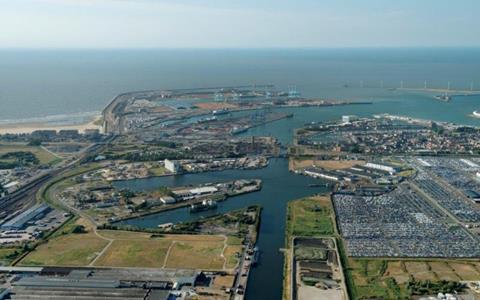 As reported last year, Zeebrugge was building connections between the Hanze and Bastenaken terminals and those are now in use, with all car and truck traffic entering the terminals via one gate.

Last year the port added an extra 54 hectares at the Bastanaken ICO terminal to afford an annual volume of around 350,000 units. Construction of a 1,071-metre quay wall in the southern canal dock, to extend the terminal and the necessary dredging works, is ongoing.

Likewise, works for a new 400-metre quay wall near WW Solution’s new concession sites, which started in 2019, will continue in 2020.

This year will see work start on the last bridge to be built over the Verbindings Dock, which will include a two-way road and a broad bicycle track.

Room for high and heavy equipment

WW Solutions will process and customise around 3,000 construction machines a year for the South Korean company, which has selected Zeebrugge as its European distribution hub.

WW Solutions, the land-based division of Norwegian shipping line Wallenius Wilhelmsen, set up the EPC to enable Doosan to optimise its supply chain and delivery network in Europe.

The 1,330sq.m EPC has a floor strong enough to handle machines up to 90 tonnes, three overhanging cranes with a combined capacity of 40 tonnes, and a new warehouse management system, says WW Solutions.

An automated vertical storage and retrieval system for parts has been installed to increase the modern EPC’s flexibility, efficiency and accuracy.

“This new equipment processing centre at Zeebrugge is a vital part of our European distribution plans going forward,” says a spokesperson for the logistics provider. “Through this expansion, WW Solutions has increased its capacity to provide a complete end-to-end solution to Doosan, enhancing our business competitiveness.” 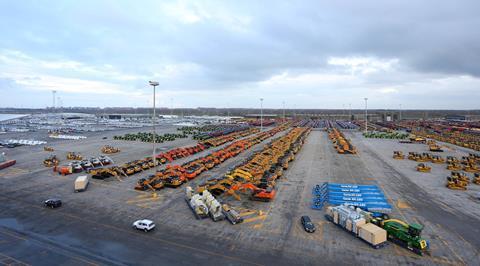 Merger with Antwerp
Additional services have been launched over the past year to support both EU and intercontinental trade, which is driving the growth in volumes at Zeebrugge. One example is the new four-day Neptune Lines for car volumes travelling to the UK ports of Southampton and Portbury via Le Havre in France, and back down to Santander in Spain.

However, one of the major announcements made last year was that Zeebrugge port had started talks on a possible phased merger with Antwerp port.

“We have been talking with the port of Antwerp for some time now to see how we can work more closely together with the aim of strengthening each other’s platforms,” said Dirk De Fauw, chairman of the Port of Zeebrugge, late last year. “The ambition of both our port authorities is to form a future-proof port with a complete offering from A to Z.”

While discussions regarding possible synergies continue, details remain confidential. A study carried out on behalf of the port authorities by consultancy firms Deloitte and Laga found that current collaborations between the two ports had limited impact because of their traditional competition, but that a more open approach could see both become stronger.

“Intensified cooperation will also enable the ports to respond more quickly and effectively to future opportunities, such as economies of scale, energy transition, innovation and digitalisation,” said Deloitte in the report. “Even more, clients of both ports are also in favour of increased collaboration between Antwerp and Zeebrugge. In short, cooperation can yield strong win-win results for both ports, provided that there is a far-reaching integration between the two port authorities.”

Last year Antwerp handled 911,000 vehicles, and adding Zeebrugge’s figure for 2019 would bring the total volume to 3.8m. For Antwerp, that was an 11% decline based on figures for the previous year, though it remains the fifth-busiest vehicle handling port.

Countering the drop in new vehicle throughput, a spokesperson for the port says it has been dealing with significant second-hand volumes. The port’s main growth in 2019 was seen on the container side of the business, where its market share went up to more than 28%.