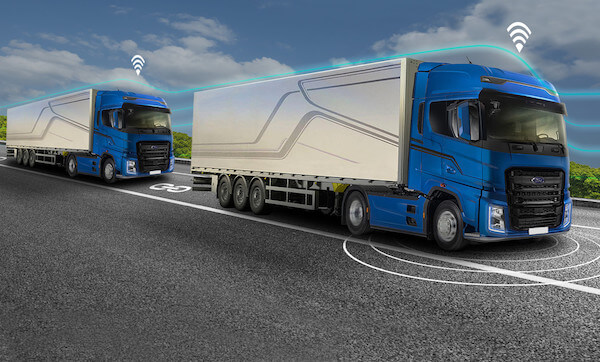 The first phase of the project is due to be completed by June this year and will see Ford Otosan’s product development team work with AVL’s engineering teams in Istanbul (Turkey) and Regensburg (Germany). At this stage the project, the latest in more than 20 years of cooperation between the companies, is envisaged to last three years.

Ford Otosan and AVL view platooning technology as an important step on the road to fully autonomous heavy-duty commercial vehicles.

Speaking at a press conference to announce the new joint initiative, Ford Otosan’s assistant general manager, Burak Gokcelik, said: “Fuel consumption and carbon emissions of heavy-duty trucks will be significantly reduced in long-haul operation, thus lowering operating costs, thanks to the platooning technology enabling trucks to follow each other at relatively close distances.

“Platooning will not only increase operational efficiency in road transport, but will also play an important role from a safety point of view,” he added.

The potential safety advantages, said Gokcelik, included faster and more reliable responses to changing road conditions than an average driver is capable of, thanks to vehicle-to-vehicle communication technology.

“As a first of its kind in Turkey, this R&D cooperation will increase our competitiveness worldwide, and also contribute to our country with added value and engineering know-how in autonomous driving technology,” he commented.

AVL’s executive vice-president, Lukas Walter, said the company would work with the newest truck from Ford Otosan, the F-MAX, for the platooning project.

Ongoing research by AVL suggests a fuel consumption reduction of 8-15% for a platoon of three trucks on long-haul operations, he added.

Graz-based AVL’s activities include development, simulation and testing of electric, hybrid and combustion engine powertrains, transmissions, electric drives, batteries and related software for passenger cars, trucks and large engines. The Regensburg unit is its global centre for powertrain and vehicle control software, electronics and e-machine development, while its Istanbul operation has an engineering workshop and two R&D centres.