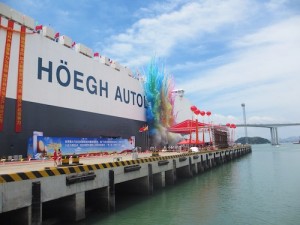 The Höegh Target, reputed to currently be the world’s largest pure car and truck carrier (PCTC), docked in the UK this week on its maiden voyage from China.

The Höegh Target is the first of six new post-panamax vessels Höegh Autoliners will take delivery of over the next 18 months. It was built by Xiamen Shipbuilding Industries and named by Mette Folden, wife of Ingar Skiaker, CEO of Höegh Autoliners. The vessels are part of Höegh’s ‘New Horizon’ design, which are said to be the largest PCTCs in the world.

Other shipping lines have also been ordering PCTCs that can carry 8,000 units or more. Wallenius Wilhelmsen Logistics has already taken ownership this year of two 'High Efficiency Ro-ro Vessels' (HERO), and has plans for another six through 2018 (read more here). This trend follows spate of ships that can carry 7,000 cars or more in recent years across the sector.

The Höegh Target has 14 decks, is 200 metres long, and 36 metres wide. The vessel has a door opening that is higher than Höegh Autoliners’ current vessels, which means cargo up to 6.5 metres high and 12 metres wide can be loaded on the ship. The ship also has stronger ramps allowing cargo weighing up to 375 tonnes to be loaded over the stern ramp and 22 tonnes over the side ramp.

Despite its vast size, Höegh has been keen to push the energy efficiency credentials of the new vessels. The ships include a new hull design that combines high cargo capacity with low fuel consumption, and are estimated to emit 50% less CO2 per car transported than a standard car carrier.

Target set sail from Xiamen in China at the start of July, and has already called at a number of ports in South Korea (Masan), Japan ( Kanda, Yokohama, Hitachinaka and Hiroshima), the Middle East (Suez Canal), Italy (Livorno and Genoa), Spain (Barcelona) and Belenux (Rotterdam and Antwerp) before arrving at Newcastle.

From Newcastle, Target will sail to Amsterdam and Bremerhaven, before rerouting back to the UK at Southampton and south to Santander, Tangier, Port Elizabeth, Durban, Maputo, Tamatave, Port Reunion, Port Louis, and Fremantle.

The vessel will operate on the East Asia to Europe shipping lane.

A spokesperson for Höegh said that the vessel will be carrying a range of cargo, from cars, to high and heavy machinery and break bulk, but could not give details as to which OEM’s vehicles were on board, due to customer confidentiality agreements.