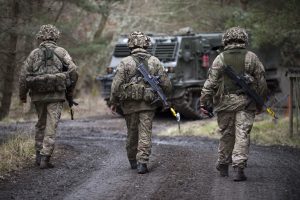 UK-based logistics firm Priority Freight has been recognised by the country’s Ministery of Defence with a bronze award in the Armed Forces Covenant Employer Recognition Scheme (ERS) for its employment of ex-defence and military personnel.

The ERS recognises commitment and support from UK employers for defence personnel.

Priority Freight, which specialised in emergency logistics with a large focus on the automotive industry, currently employs seven people with a military background. According to the company, premium freight logistics is well-suited to ex-military personnel as there are parallels between the pressures of coordinating time-critical logistics solutions on behalf of major global manufacturers and in commanding military logistics group.

The company most recently hired Nathan White as logistics coordinator in his first civilian role after serving in the British army with the Royal Engineers for four years. “Logistics at its root is time versus speed versus distance and this has been a constant for me in both roles,” said White. “My tasks in the military involved moving people and kit, whereas at Priority Freight it is more specialised due to the nature of our clients.”

Leanne Barry, a team leader at Priority Freight, and a five-tour veteran captain, began working at the company two-and-a-half years ago, responsible for moving high value shipments around the world. “Everything is on a time constraint here. As tensions rise, it can remind me of being in the army because it is so fast and furious,” she said.

“We have to ensure everything is delivered on-time and in pristine condition, because dozens of global manufacturers rely on you to deliver the military precision they have come to know.”

Group managing director Neil Williams said that it wasn’t a conscious decision by Priority Freight to seek out ex-military staff, but it happened organically. “I think it is due to the transferable skills that complement a role at Priority Freight. The nature of emergency logistics can often create a pressurised working environment, with many moving parts to manage; something that our ex-defence team members adjusted to with ease.

“We are very proud to have been recognised by the Armed Forces Covenant,” he said. “Our team members achieved great things during their military careers and we are extremely pleased to see them making successful career gains outside of the military with Priority Freight.”