Providers long to be longer in India

The Indian authorities’ inability to define a length for car carriers has led to confusion and fines in certain states, while the industry is unsure about which way to grow, writes Ramesh Kumar.

It’s hard to believe, but true: 99.1% of all car carriers–20,000 at the last count–currently ferrying new vehicles to dealers across the length and breadth of India do not meet legal standards. They are unauthorised and liable for prosecution. On what grounds? They are too long. But that is because for more than three years, the issue over carrier length has been held up at the federal Ministry of Road Transport & Highways (MORT&H). In a classic struggle between central and state powers, carriers are finding themselves caught between states permitting longer lengths and others setting heavy fines for violators. Regardless of the outcome on length, carmakers and providers mainly want a final decision.

The long and the short of it
At stake are the height, length and width of the car carrier, but the contention is over length: 18.75 metres or 22 metres (or even 22.75)? The current regulations permit lengths of 12 metres for regular trucks and just 16 metres for articulated vehicles–the latter being those which car carriers are supposed to deploy. But India’s truck regulations, the Commercial Motor Vehicles Regulations (CMVR), do not provide any classification for car carriers, according to Rajesh Uppal, chief general manager of Maruti Suzuki, who headed the AISC subcommittee on dimensions of vehicle carriers set up by the Automotive Research Association of India (ARAI) in July 2008. Uppal’s panel submitted its final report in the same year. ARAI director Shrikant Marathe wrote to the MORT&H in January 2009 forwarding its recommendations, echoing and endorsing the panel’s views. “The present capacity of automobile manufacturers is set to double within the next 2-3 years,” wrote Uppal in his recommendations to the ARAI. “In view of it, the infrastructure segment requirements also need to be kept in mind and suitable support would be necessary to assist the growth of the automobile industry.” 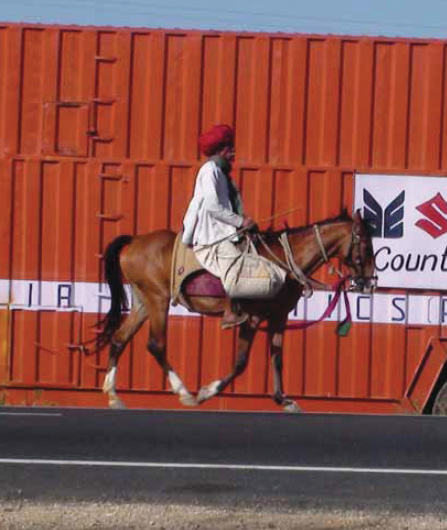 ARAI’s Marathe did his own homework on the three critical issues in this regard, including the present dimensions of rigid body trucks and tractor-trailers in India, the existing provisions in CMVR and also the practice in European countries, notably EEC Directive 96/53/EC as amended by directive 2002/7/EC.

“The EEC directive does not define ‘vehicle carriers’ separately,” Marathe wrote to the MORT&H. “These vehicles are, therefore, treated as goods carriers under N2/N3 and 03/04 categories as the case may be. Vehicle carriers in Europe are normally open-bodied constructions, which are built on low-floor chassis, whereas in the Indian context they are closed bodied and require larger dimensions. Over and above the directives, every [European] country may adopt different limits based on their road infrastructure and traffic/logistics requirements.”

His two final points are that vehicle carriers haul “larger volumes rather than large payload”, which means road damage is not an issue–a conclusion also put forward by the European Association of Vehicle Logistics (ECG) in its own arguments for longer trucks. In addressing safety concerns, he writes “safety aspects of trailers are being addressed in the Truck Body Code and Automotive Trailer Code, which is under formulation and these standards would address type approval procedures of such vehicles in future”.

Government lethargy
Marathe’s recommendations reached the desk of MORT&H in the first week of January 2009. Since then, the industry has waited anxiously for a decision; every time the Minister of Transport speaks at the Society of Indian Automotive Association (SIAM), delegates sit on the edge of their seats hoping that he will say something to bury the issue once and for all. But they have so far been disappointed. It isn’t that the MORT&H did nothing following the submission of the recommendations. It has expressed support for the longer trucks and taken numerous, piecemeal measures to give 22-metre trucks a temporary reprieve. In the meantime, some states chose to overlook the prescribed norms and registered over-size vehicles, while other states set heavy fines for providers using such carriers. These fines led the MORT&H to define these over-size vehicles as “specially designed” to meet the logistics requirement of the auto industry and it beseeched state governments not to harass such trucks.

The MORT&H also used its discretionary power under section 110 of the Motor Vehicle Act to temporarily exempt many such over-size trucks from the federal size limits–but it ran out of ways to put a plaster on the problem more than a year ago. The last such notification expired January 20th 2010, while the government notification inviting objections and suggestions on amendments expired on August 15th 2010. Normally, following such a period, a final decision is taken within weeks. But the ministry has been silent since, inciting considerable ire in certain circles of the logistics sector.

Why should automotive be so special?
There are those who feel that even the temporary measures gave preferential treatment to the automotive sector compared to others. Chittaranjan Dass, Secretary General of the All India Confederation of Goods Vehicle Owners’ Association (AICOGOA), would like to see wider revisions to the road haulage sector that would allow for longer trucks. The 80-year-old lawyer and former All India Motor Transport Congress general secretary has appeared before the Marathe Committee; Marathe brought Dass’s concerns to the attention of the government but took a neutral stance on his views. “AICOGOA had suggested that the overall limits for goods and passenger carriers should also be revised,” wrote Marathe. “Cognisance of this communication was also taken, however we feel that the need for revising the existing dimensions in CMVR was outside the terms of reference of the panel and the Ministry may like to take an appropriate view on the suggestions of AICOGOA. Also… vehicle carriers are high volume, low weight carriers and hence similar dimensions, if applied to normal vehicles, can lead to unsafe operating conditions.” But Dass does not buy the “low weight and high volume” logic of ARAI. “Besides cars, there are a variety of other cargos like fridges, television etc., which are light in weight and high volume cargo. They also should get the same favourable treatment as bestowed upon car carriers,” he argues.

Business as usual for most
Fabricators of car carriers are also anxious for an answer, but appear ready to build whatever is necessary. While a 22- 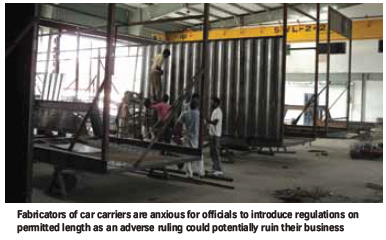 metre carrier fetches higher revenue, it is not up to manufacturers which product to build. “I fabricate what [carriers] ask for. I have no say. And they are driven by their own business logic,” says Ashok Hissaria of Bangalore-based Tippers & Trailers India, one of the leading car-carrier builders.

Gopal Reddy of Aditya Auto Engineering, a new entrant into the car carrier segment, operating just a few kilometres from Tippers & Trailers India, claims he stopped accepting 22-metre fabrication jobs–in fact, he is becoming wary of car carriers in general, given their low margins compared to tippers and trailers. But the uncertainty over lengths is bad for everyone. “No fleet owner wants to see his business going up in smoke one fine morning if the government were to bless only the 18.75-metre ones,” he says, as his workshop finishes what could be the last delivery of a 22-metre vehicle.

What about fleet owners? “I was never into 22 metres at all,” proclaims Kamal Kishore Goyal, managing director of Tirupati Translogistics, whose fleet consists entirely of 18.75- metre vehicles for Maruti Suzuki from the north and Toyota Kirloskar from the south. He is nicknamed the ‘most ethical transporter’ in this segment, although it is still a mystery how he got this moniker since his 18.75-metre long vehicles are still in violation of the existing 16-metre vehicle dimension norms. He laughs, and says, “Perhaps I am closer to what is likely to be the sanctioned norm!” He admits that the shift to 22 metres happened with a view to achieve greater economies of scale from the fleet owner’s point of view.

“Fleet owners began to think carrying more passenger cars in a single car carrier would reduce per unit costs–particularly at a time when OEMs were reluctant to hike the rates offered,” says Goyal.

The Maruti side, and the others
“We want to be fully compliant with government regulations,” says Randhir Singh Kalsi of Maruti Suzuki, head of vehicle logistics for the country’s top passenger carmaker. He believes that the on-going discussion with the MORT&H suggests that the 18.75-metre length is likely to get the nod and Maruti has put its considerable weight behind this size.

“We’ve begun to give special incentives to fleet owners of 18.75 metres. We will be glad if this policy is out and all states are brought on board, which in our reckoning would reduce the harassment of fleets on the highway. At the same time, we cannot show the door to the huge 22-metre fleet owners who have been with us for long. It would be a national loss if 22-metre carriers were banned with immediate effect. Give them a reasonable phase out time,” says Kalsi. The anxiety among 22-metre vehicle owners is palpable, but they appear ready to adjust. P. Subramaniam, the managing director of Cargo Wings of Chennai, a supporter of the 22-metre car carrier, is awaiting the delivery of his final 22-metre vehicle from Aditya Auto Engineering. “The last word is not out yet. I have gone in for a modified version of 18.75-metre version to carry more vehicles than others in the same dimensions with my design consultants–Western Auto–and I must say, the encouragement from Maruti is commendable,” he says.

Meanwhile, some of the new entrants into the car carrier segment, such as VRL Logistics from Belgaum and DRS 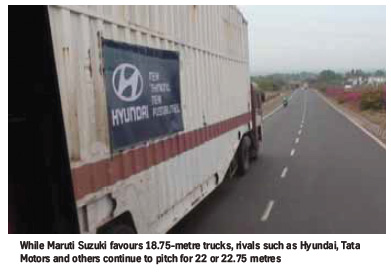 Logistics, have shrewdly gone in for 18.75 metres. Though Maruti Suzuki is showing special dispensation towards 18.75-metre trucks, rivals such as Hyundai, Tata Motors and others continue to pitch for 22 metres, citing strategic interests. Jitendra Singh Ahluwallia, chairman and managing director of Seamless Autotech India, the first company in India to fabricate auto carriers from Pune, says: “You can divide the entire fleet owners into two categories: Maruti and non-Maruti. All fleet owners servicing Maruti have gone in for 18.75 metres and others have no compunction in embracing 22-metre vehicles.”

Several fleet owners candidly admit that Maruti Suzuki is pushing providers towards 18.75 metres so that if the government regulations eventually favour this size, the carmaker’s finished vehicle delivery business would not face disruptions. Tony Arora, owner of Autocreates from Pune, agrees. “Maruti Suzuki clearly told us that any expansion of our fleet ought to be in the 18.75 metre category. Otherwise, it would not recognise those vehicles.” Sriram M, design consultant at Western Auto suggests that for carrier design an important safety aspect is the turning ratio of trucks, but that the government appears to be looking to restrict speed.

“You can even have a 40-metre-long carrier but with the proviso that it must turn within 22 metres of road width. By specifying length, the authorities want to restrict vehicle speed and thereby improve road safety,” he says. He claims that the magic figure of 18.75 metres was itself determined by turning circle issues.

Keep firm and carry on
The dilemma over 18.75 or 22 metres is a multi-dimensional one that will affect the future of the car carrier industry. SIAM estimates the vehicle logistics industry provides employment to 35,000 people directly and many more indirectly. Notwithstanding the slump in sales over the past few months, the automotive industry is likely to grow considerably. Carriers are hoping that the government will recognise their significance and finalise the decision.

Once carrier length is determined–and it looks increasingly to be 18.75 metres–there is likely to be a boom for vehicle chassis makers, fabricators/body builders and all accessories manufacturers and dealers who rush to buy the legal carrier. It will also usher in further innovation, such as Sriram’s 18.75- metre carrier that houses ten Maruti Suzuki Altos or Tata Nanos. The industry is ready to move forward, the question to the government remains: what’s the problem?