The deal to rescue PSA signifies both risk and reward for its logistics providers in Europe and China. 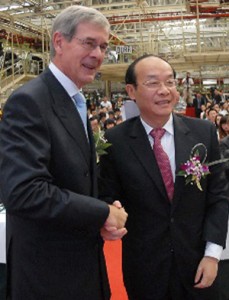 The deal to rescue PSA Peugeot Citroën between Dongfeng Motor Group, the French government and Peugeot family will transform the carmaker’s global strategy over the coming years as the brands look to treble volumes in China and expand in Southeast Asia. While most analysts will be watching the group’s model line-up and how it manages production capacity, there are significant supply chain and logistics implications – including for PSA’s former logistics subsidiary, Gefco.

PSA and Dongfeng have ambitious plans for China, with targets to increase sales at their joint venture, DPCA, from 550,000 to 1.5m vehicles by the early 2020s (PSA also has a JV in China with Changan). PSA and Dongfeng are also considering building a fourth plant in China. This massive increase would reshape the French OEM’s global supply chain.

China has already been important to the carmaker’s material flow both as a source and a destination. European suppliers and their components support PSA’s Chinese production, and large increases in output would drive more freight, even allowing for further parts localisation.

China has already been the lead producer for some global PSA models. The Peugeot 408, for example, was first launched and built in Wuhan by DPCA. Later, PSA extended complete knockdown kit (CKD) production to Latin America and Russia, with a large amount of material consolidated in China and shipped by sea to Argentina or by rail to Russia. DPCA also built the Citroën C4L before it was assembled by CKD in Russia. Now, with Dongfeng and PSA planning a joint R&D centre in China, DPCA will likely serve as the ‘mother plant’ for more models that may be exported or co-produced elsewhere – including Europe. That is already the situation today for General Motors in China, where several Buick were first built before coming to the US.

Although PSA’s money worries already led it to sell a majority stake in Gefco in 2012 to Russian Railways (interestingly, for a similar sum that Dongfeng and the French government have each paid for 14% of PSA), the logistics provider could be among the chief beneficiaries of DPCA’s expansion. Gefco already has a joint venture with part of Dongfeng (Dongfeng Gefco) that provides inbound services for two of DPCA’s three plants in Wuhan, including vendor-managed inventory, milkruns and just-in-time delivery, according to Christophe Poitrineau, president of Gefco Asia. The joint venture is also DPCA’s logistics partner for a local spare parts warehouse in Beijing, and manages parts distribution in northern China. Finally, Gefco’s international arm is involved in consolidating and shipping global freight for PSA between China and several markets, including CKDs to some destinations in Southeast Asia.

There is no guarantee Gefco would win new business with DPCA, and the provider has no direct business as yet with Dongfeng, but Poitrineau has reasons to be hopeful. “We believe we have much opportunity to step up our partnership with Dongfeng in inbound logistics, outbound logistics and warehouse management, among other areas,” he said.

PSA and Dongfeng also plan to export vehicles from China, in particular to Southeast Asia. This again would open up logistics opportunities. Poitrineau said that Gefco is already doing studies ahead of starting up logistics activities in the region, including for Thailand, Indonesia and Malaysia.

Further changes for PSA’s supply chain can be expected outside China. The carmaker has pointed to the need for more localisation in Russia and Latin America, both of which have gone backwards recently for PSA. The French government’s investment will also likely put pressure on the OEM to meet its commitment to French unions of producing 1m vehicles per year in France by 2016 (it built 940,000 there last year). Achieving this will require big cost reductions, with logistics and supplier prices likely to be in focus.

PSA and Dongfeng are targeting €400m ($550m) in global annual savings by 2020. Although the company has yet to disclose details, the track record of its new chief, Carlos Tavares, suggests that he will attack the supply chain as aggressively as anything else. He has been credited with cutting purchasing and logistics costs at Renault, for example. [sam_ad id=6 codes='true']

Gefco, which has an exclusivity contract with PSA in Europe for several more years, is well positioned to benefit from any recovery for the carmaker in Europe and growth in emerging markets, but its independence could also leave it vulnerable. Tavares is unlikely to bow before any sacred cows, especially those in which he has only a minority stake. Between the Peugeot family, Dongfeng and the Élysée palace, he will already have enough people to answer to.