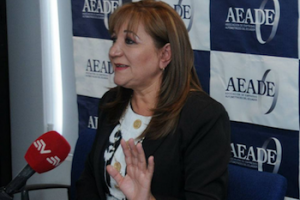 Gloria Navas, president of the AEADE, says that Ecuador's vehicle import quotas for the first quarter have been met a month early

The move follows new statistics from the two bodies showing that vehicle sales fell 49% in the first two months of this year compared to the same period in 2015, as a result of the new system and the country’s contracting economy. The drop follows a 32% fall in imported and assembled vehicles during 2015, equating to 38,800 fewer units.

According to Gloria Navas (pictured), president of AEADE, the first quarter's quota was met a month early. Jaime Cucalón, president of AEA, has suggested at least 150 finished vehicles are now stuck in customs and will only be allowed into the country in April.

Both the AEA and AEADE have also questioned the inclusion of armoured vehicles in the new rules and pointed out that compared to 2010, imports of all finished vehicles are down 62%.

Quotas have also impacted on locally produced vehicles, according to the Ecuadorian Chamber for the Automotive Industry (CINAE). Although these are not set on a quarterly basis, the lack of a freeflow system is hitting production, said executive director David Molina. In 2012, local production reached 79,600 units, dropping to just under 49,000 units last year.

Vehicle import quotas are common features of trade policy in Latin America. Brazil, for example, has imposed quotas on vehicle imports from Mexico in a bid to protect local assembly, while its policy with Argentina has been based on reciprocal trade amounts in parts and vehicle value. However, in the midst of its worst recession in 80 years, Brazil is reported to be changing course, and is seeking to liberalise automotive trade further with Mexico and Argentina.