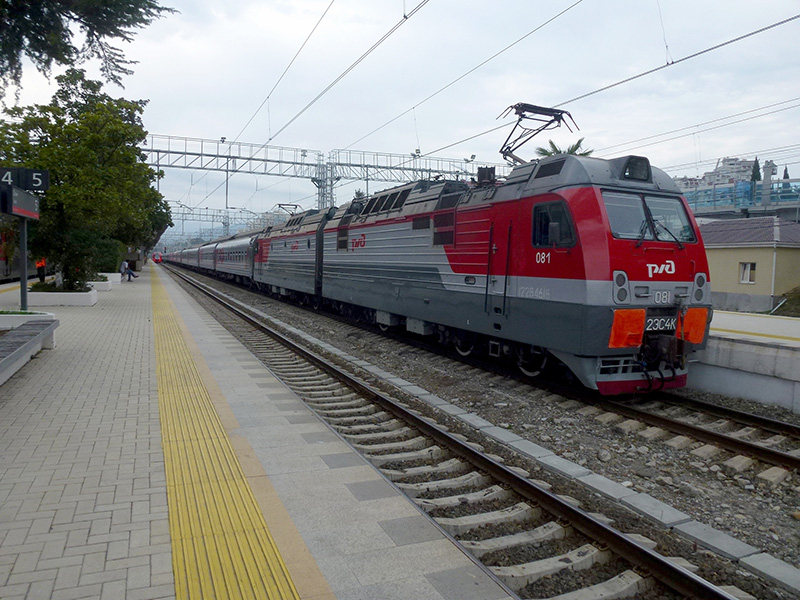 Rail transport of finished vehicles in Russia is dropping fast under the combined pressure of rising charges, falling state subsidies and dwindling demand for new vehicles

Rail transport of finished vehicles in Russia is falling fast – faster even than a new vehicle market that has virtually collapsed over the past three years. According to Jakub Zajkowski, chief executive officer of RailTransAuto, a major stake of which belongs to state-owned rail operator RZD Russian Railways, finished vehicle rail freight fell 27% in the first half of this year compared to the first half of 2015. That is almost twice the rate of decline of new car sales in Russia, which in the same period dropped by 14.1%, according to statistics from the Association of European Businesses.

“The result is that rail’s share of the vehicle transport market in Russia dropped from 18.63% in the first half of 2015 to 16.22% in first half of 2016,” says Zajkowski. “The share of RailTransAuto stayed the same, however, as the company accounts for nearly 45-50% of all [finished vehicle] rail transportation.”

According to the company, this is the second year of decline in rail’s market share, with a fall of around 2% last year from nearly 20.5% in 2014. Elena Kunetsova, a spokesperson for RailTransAuto, says the main reason for this was a decline in the size of the average shipment of vehicles last year, brought on by the overall drop in demand for new cars in Russia.

Spokespeople for RZD suggest there has only been a truly significant reduction in demand for rail transport of vehicles in Russia itself, though they admit a negative tendency has been observed for both internal movements and transit movements across the Commonwealth of Independent States (CIS). According to estimates by research firm Autolink, rail transport of finished vehicles serving CIS countries has dropped 50% in recent years, leaving around 60% of rail capacity in this segment unused. Nikolay Dvoryankin, Autolink’s general director, says rail’s share is still falling across Russia and centra Asia. 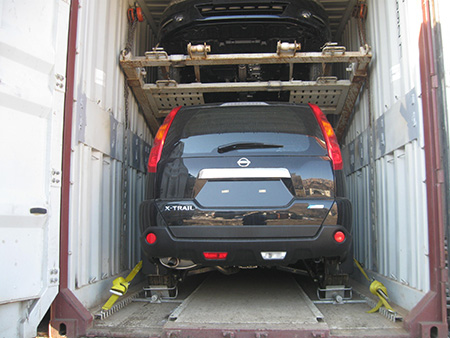 While the quicker lead times of road transport offer a competitive advantage over rail, the latter is still preferred for long-haul delivery to remote regions of Russia

“Rail transport has been used primarily for delivery of vehicles in those regions of Russia where demand has fallen the most in the last few years,” he points out. “In addition, in the current difficult economic situation, RZD continues to pursue a policy of raising its rates for transport, demonstrating a lack of flexibility in its pricing. At the same time, transport charges account for the largest share of the cost [of vehicles delivered by rail],” he says.

[sta_anchor id="1"]According to official RZD statistics, average growth in rates for vehicle transport by rail has been 8-9% per year for several years. That is almost twice the rate of rise for road transport in Russia and the CIS, which has risen by about 15% in total over the last three years – almost all of it attributed to the recent introduction of the Platon Electronic Toll Collection system. The toll has increased the cost of vehicle transport by 12% since March this year, according to logistics provider, Glovis Rus.

Competitive pressuresThe upshot is that rail transport is getting more expensive, while rival trucking firms have cut or maintained rates.

Oksana Kots, rail specialist at logistics provider Agility Logistics, suggests that in the heightened competitive tussle among logistics companies, road transport carriers are winning out because road transport is simpler to organise and involves lower cost. She also points to a lack of good-condition vehicle rail wagons as another factor contributing to falling demand for rail.

“In general, rail transport is less competitive than road transport. Using a truck is much faster, cheaper and less problematic for the customer in terms of organisation,” Kots stresses.

"In general, rail transport is less competitive than road transport. Using a truck is much faster, cheaper and less problematic for the customer in terms of organisation." - Oksana Kots, Agility Logistics

Anna Komarova, head of the finished vehicle logistics commercial department at Gefco, which is majority owned by RZD, says road transport is also winning out in terms of delivery times. “Given the backdrop of low car sales in the Russian market and the competition between different automotive brands, quality of service is critical,” she says. “Delivery time plays an important role in vehicle sales, especially in the provinces, and many customers put this second only to price in their purchasing decision. In terms of lead times, road transport is more competitive as vehicles can be delivered door-to-door on one transporter.”

Eugene Rodionov, a spokesperson for the Russian Ministry of Infrastructure, says it would be wrong to talk about any radical change in the balance of finished vehicle logistics, however. He admits there might be some temporary changes in cargo flows as the logistics sector looks for new points of balance, but suggests that rail’s share of the finished vehicle logistics sector will return to previous levels, most probably as demand for new cars in Russia bounces back.

[sta_anchor id="2"]Just one track to followSome carmakers in the region have no option but to use rail. It remains the only sensible way to move vehicles between areas like Siberia and the Far East to central regions of Russia, for example.

Anastasia Tsurkan, manager of logistics services provider Glovis Rus, says the company uses both rail and road for moving Hyundai and Kia vehicles within Russia – though road transport does dominate. 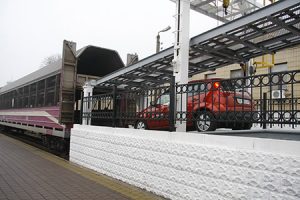 RZD claims it is only within Russia that demand for rail transport has significantly reduced, but analysts estimate that vehicle movements by rail for CIS countries have dropped 50% over the past few years

“To some cities of the Urals, the cities of Siberia and the Far East, we transport by rail; but rail only makes up about 20-25% of our total transport operation,” she says. “We tend to use trucks because of shorter delivery times and because it is more attractive in terms of transport costs for shorter distances. Rail is, however, beneficial for long-haul destinations and delivery to remote regions of the country, where the road network is not developed.”

Some Hyundai and Kia cars, for instance, are imported into Russia from Avtotor’s plant in Kaliningrad, the Russian enclave on the Baltic coast, via Beloostrov station, near St Petersburg, and Akulovo station, near Moscow.

Similarly, Mazda, SsangYong and Toyota cars produced at Avtotor’s Vladivostok plant in far-eastern Russia are delivered to central Russia by rail as there is no real alternative.

[sta_anchor id="3"]State subsidiesMinistry of Industry and Trade spokesperson Anatoly Seleznev says one important factor affecting the delivery of cars from the Far East has been that of state subsidies.

In 2015 and 2016, the Russian government allocated 3 billion roubles ($46m) in subsidies. With the recent economic crisis and falling car sales in Russia during 2015, it has extended the routes that qualify for subsidies, including a number of new geographical areas and also including car deliveries arriving by sea from the Far East – though according to the Ministry, carmakers do not generally use ocean transport to move Russian-built cars domestically.

Despite these programmes, the Russian government, its coffers depleted by a weak economy and low oil prices, has been reducing the subsidies on offer for several years. The devaluation of the rouble has also undermined the value of such subsidies in hard currency terms. For example, prior to 2014, annual subsidies amounted to the equivalent of $100m. During the course of next year, meanwhile, subsidies will be cut to the equivalent of just over $23m while in the longer term they will be done away with altogether, the government has confirmed.

Currently, subsidies are worth 82,000 roubles of the roughly 120,000 rouble cost of moving a car by rail from the Far East to Moscow. From 2017, however, that subsidy will fall by almost half to just 42,000 roubles. Based on planned rate rises, the equivalent rail journey will cost 140,000 roubles then, which would make it harder for rail to compete against road carriers. Currently, rail subsidies support the movement of nearly 40,000 cars per year from far eastern Russia. 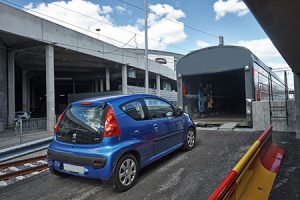 While PSA used to use rail for moving vehicles in Russia, as well as parts and knockdown kits from Europe, current volumes mean road is now the only viable option

Marina Stepina, Eurasia region spokesperson for PSA Group, which has an assembly plant in Kaluga, south of Moscow, says it does not use rail for its vehicles at all. Given current volumes and the needs of the company, road transport is the only viable option, she says. The company has, however, used rail in the past for vehicles as well as for imports of knockdown kits from Europe, all of which now move by road.

Other carmakers continue to use rail in a small way, however. Avtovaz and Volkswagen deliver finished vehicles by rail to Kazakhstan and Belarus, as well as to some remote regions and the Far East. Andrei Rodionov, a spokesperson for Mercedes-Benz Russia, says Daimler, for instance, opts for road transport with the exception of some multimodal journeys including rail to Vladivostok and Khabarovsk. Some carmakers meanwhile, including BMW and Volkswagen, have used rail across Russia and central Asia as a transit route for moving cars between Europe and China.

Despite the current bias towards road transport, however, some market participants believe rail transport will gain more traction in future. Anna Komarova of Gefco suggests rail will restore its position as growth returns to the market and as available truck capacity is squeezed by the resulting increase in demand.

With the lack of options when it comes to moving vehicles to more remote regions of the country, any rise in car sales will inevitably lead to a growth in the use of rail, agrees Autolink’s Nikolay Dvoryankin. He admits, however, that it is hard to predict just when that will come to pass, given the current economic situation. For some rail service providers struggling to create a compelling business case for the automotive sector, that day cannot come soon enough.