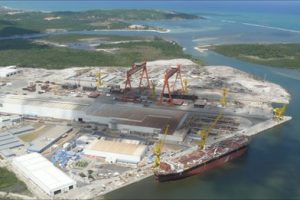 Attempts to simplify and reduce the bureaucracy that has been hampering Brazil’s ability to trade with other countries in South America seem to be working, with export demand helping to drive up production in the country, along with stronger domestic sales.

According to the Ministry of Industry, Overseas Trade and Services, in August 2017, vehicles worth a combined $641.6m were exported from the country, an export record for the month.

Figures from the National Association of Motor Vehicle Manufacturers (Anfavea) show that in August, passenger car exports hit 66,600 units – up 61.7% over August 2016’s figure of 41,200.

September also saw exports rise by 52% compared to the same month last year, with slightly more than 60,000 units shipped, although this year's total for September was down 10% month-on-month.

Single gatewayThese growing exports are based on better communication between carmakers producing in Brazil and customers abroad, not least the signing of several international trade agreements, one of which relates to a new import process based around the Single Import Declaration, which replaces the current Import Declaration and Simplified Import Declaration.

The Single Import Declaration means a car can be registered in a country to which Brazil is exporting before its arrival there and, as a rule, in parallel to obtaining the import licences. As information is provided in advance, procedures such as risk management can be advanced, ensuring faster flow of cargo.

Thanks to this simpler set-up, the cost of issuing certificates of origin for automotive movements between Brazil and Argentina, for example, has fallen 30%. Paperwork can now be issued in 30 minutes as opposed to 24 hours.

In 2018, another agreement will come into force – the Rota 2030 automotive trade agreement, replacing the previous Inova-Auto initiative.

Fresh forecastsThe recent uptick in exports has prompted Anfavea to revise foreign and domestic sales projections for 2017 from 2.13m units to 2.2m units – an increase of 7.3% over 2016.

Overall production of finished vehicles in Brazil this year, meanwhile, is now expected to reach 2.7m, up 25%.

Exports certainly drove an increase in vehicle production in Brazil in September. During that month, total production amounted to 236,900 units, up 39% over September 2016 but down 9.2% on August 2017. In the first three quarters of this year, total production rose 27% to 1.9m units.

The domestic market is also showing signs of recovery, with sales in September reaching 199,200 vehicles – up 24.5% on September 2016. In the first three quarters of this year, domestic sales amounted to 1.62m cars, light commercial vehicles, bus and truck chassis ­– up 7.4% over the same period last year.

The north-eastern port of Suape (pictured above) is one of the key areas reaping the rewards of easier trade with Argentina and the rest of Latin America.

For the last 12 months, the port has been exporting Jeep Compass units produced at the Fiat Chrysler Automobile (FCA) plant in Goiana. Most of the outbound units go to the port of Zárate, in neighbouring Argentina, although others go to Chile, Costa Rica, Panama, Peru and Uruguay. A total of 45,000 units have been sold since production started in 2015.

FCA now accounts for 82.9% of ro-ro cargo despatched annually from Suape, with more than 40,000 units passing through the port this year. GM, Toyota and Volkswagen respectively account for a further 2.8%, 13.4% and 0.9% of traffic.

The future of the automotive industry in Brazil and its neighbouring countries will be under discussion later this month at the Automotive Logistics South America summit, which takes place in Sao Paulo on November 28th.