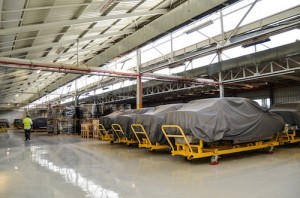 Renault has inaugurated a new €50m ($62m) plant near Oran in Algeria, Africa’s second-largest automotive market. It is the company’s first assembly plant in the country. The facility will make the new Renault Symbol for the local market and will begin with a production capacity of 25,000 vehicles a year, with the potential to increase this output to 75,000.

The plant, which is at Oued Tlelat, 27km outside Oran, is assembling the Symbol units from semi-knockdown (SKD) kits sent from Renault’s plant and logistics centre in Pitesti, Romania. The carmaker has not confirmed with which transport and logistics companies it is working for the delivery of the kits to Algeria.

More than 220 containers of SKDs per week will be exported from Pitesti via the Romanian port of Constanta, on the western coast of the Black Sea and delivered via the port of Oran.

According to Renault, following an order it takes eight weeks to receive the parts and use them in assembly at the Oran plant.

Renault said that the local sourcing for the vehicles would be built up gradually. Local supply contracts have already begun, with plastic injection parts being supplied by Joktal and seats being supplied by local supplier Martal. Other agreements are under review according to Renault.

Proximity to road network and port
The facility is part of a site covering more than 150 hectares, with 20 hectares reserved for subcontracting. Oued Tlelat was chosen for its access to the road network, which is the most dense in Africa, and other infrastructural benefits, including proximity to the port of Oran. The site was also chosen because of the qualified workforce in the region.

In 2002 Renault  established a wholly owned subsidiary in Algeria. Between its Renault and Dacia brands it reported a 25.5% share of the market as of the end of September this year.

The carmaker also said it had an extensive network in Algeria, with 127 dealerships and 64 agents. In addition to the plant Renault Algeria has a delivery centre and a spare parts warehouse, as well as a training centre and academy.

Construction began on the Algerian plant in September 2013. It is owned by Renault Algérie Production, a company found by Renault and local partners in January last year. Renault Group owns 49% of the plant, while SNVI (Algeria’s national society of vehicle makers) owns 34%. The remaining percentage is owned by FNI, the Algerian national investment fund.

The company currently employs 350 people directly (40% of them women) and there have been a further 500 jobs created in the supply chain according to Renault.