Renault Samsung ships Nissan Rogue from Korea to US 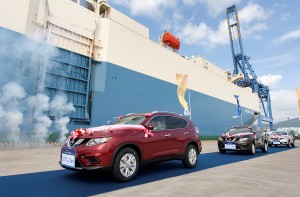 The first batch of Nissan Rogue SUVs, produced at the Renault Samsung Motors Busan plant in South Korea, has been shipped to the US from Busan New Port.

A total of 4,000 vehicles were moved on the first haul, with plans to begin selling them in North America and Canada from October. The vehicles have been produced in Korea since August, and there are plans to ramp up production to supply 80,000 Rogue vehicles a year to the US and Canada by 2019.

The manufacturing of the Nissan Rogue will help Renault Samsung Motors to secure its production volume of around 30% of its annual plant capacity target, but it does detract from Nissan’s goal to produce 85% of the vehicles it sells in the US, in North America.

The need to import vehicles from Korea to the US has arisen because Nissan’s Tennessee plant – where the Rogue is produced in the US, along with five other models – is currently operating at its maximum capacity of 640,000 vehicles per year over three shifts; that has made it the top producing plant in North America for the first half of 2014. Nissan has also attained a record US market share of 9.3% for the first seven months of 2014, with sales up 6.2% in Canada, 8.6% in the US, and 25.3% in Mexico. The Rogue is the second-best selling Nissan car in the US, behind the Altima, and in the first eight months of 2014, 109,930 units have been produced in North America. In total, Nissan has produced 772,375 cars in the US, and 390,100 trucks in the first eight months of 2014.

Pierre Loing, Nissan North America vice president, attended the launch of the vehicles from Korea. “Through this strategic decision by the Group, we were able to satisfy the shortage of Rogue volume in North America, particularly the West Coast, efficiently without missing superior quality,” he said. “It is an excellent case demonstrating strong ‘win-win’ synergy of the Renault-Nissan Alliance.” Nissan uses the port of Los Angeles and the port of Vancouver on the West Coast.

Last year, Renault Samsung Motors posted a profit for the first time in three years, with sales of 3.3 trillion won ($3.1billion). The company is now focusing on sales outside of Europe, particularly in the Asia-Pacific markets, which are fast-growing. Its ‘RSM Drive the Change’ three-year plan aims to achieve turnover growth of 70% in 2016, compared to 2013, making it one of the top three OEMs in Korea.

Nissan overall has been localising more in North America: the OEM announced a few months ago that it will begin building the Murano in Canton, Mississippi. Canton will become the global production source for the crossover, and it will be exported to more than 100 markets globally. The OEM is also expanding its output in Mexico and currently has a 25% market share. Its Aguascalientes plant will begin production of the Infiniti line in 2017 after opening in 2013, and annual production capacity is aimed at more than 850,000 units.