In the second part of our North Africa feature, Renault's logistics director for Morocco, Alain Joyeux (pictured below) reveals that it is full-steam ahead for the carmaker as it dominates vehicle production in Morocco and the wider region 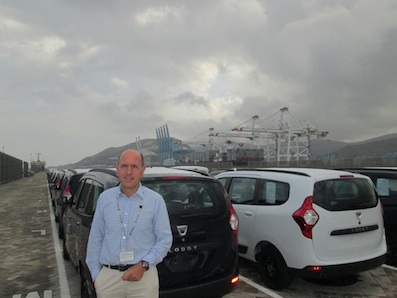 In a region afflicted by conflict for the past few years, Morocco, though not without its faults, has remained the most stable country in North Africa. This was an important consideration for the Renault Nissan Alliance when it opened a major plant in the country early last year. The Melloussa facility, located about 35km from Tangier, is a major automotive milestone in North Africa.

The plant produces 400 cars per day, and its initial year’s output totalled 100,000 units. Annual capacity is 340,000 units and production is on the rise. Its current models are the Dacia Lodgy and Dacia Dokker light commercial vehicles. Renault also operates a plant in Casablanca, which produced 50,000 units last year and has a capacity of 75,000 units. With wider growth and rising logistics demand in the North African region, Renault has also planned a new plant in Algeria by 2015.

Alain Joyeux (pictured above), logistics director of Renault Morocco, says the carmaker’s inbound logistics strategy is the same for both plants. Renault uses three primary inbound channels for Morocco: domestic trucking, ocean containers and a ferry/truck combination from Europe. It ships to each plant separately, which avoids the need for deconsolidation and reloading. “Our main objectives are to reduce transportation costs, increase truck fill rates, and increase the number of parts per package,” says Joyeux.

For the Tangier plant, which receives about 100 inbound trucks per day from all channels, about 50% of inbound parts by value are from domestic suppliers. By volume, Morocco-based tier one suppliers provide 70% to 80% of the inbound parts for the plant. These include larger items such as dashboards, door panels, and plastic parts. Local suppliers ship by milkrun and by dedicated trucks.

Renault uses both regular and just-in-sequence deliveries. The Tangier plant receives just-in-sequence shipments from about 10% of the total inbound volume, and only from suppliers close to the plant. “Just in time shipping does not really apply because daily deliveries go directly to the workshop. This helps us to maintain low stock levels at the plant,” explains Joyeux. Most of its Moroccan suppliers are within 30km, but some are up to 200km from the plant. 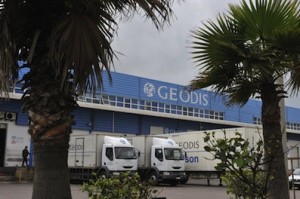 Between 20% and 30% of the Tangier plant’s supplies originate overseas. Slightly more of the volume moves by ferry-truck than by sea container. Renault’s use of the European truck method began with this plant. Consolidations occur at several facilities in Europe, including ones in Lyon, France and Valladolid, Spain.

Ferry-truck shipments move by truck from France, Spain, and Portugal to Gibraltar. The trailer and chassis are then driven onto the ferry. The 15km-wide Strait of Gibraltar separates the ports of Gibraltar and Tangier. “For these imports, we also try to use side-opening trucks, and we have increased our use of them. However, rear openers are easier to control from a customs perspective in order to minimise theft and the transport of contraband drugs,” says Joyeux.

Renault’s container shipments are either supplier-dedicated or are shipped through its International Logistics Network (ILN), a series of crossdocks that consolidate and ship full containers from centres in Romania and Turkey. Renault ships ocean containers from its Dacia subsidiary in Romania every week, if possible. Other suppliers are located in Turkey, India and China.

Along with importing production parts, Renault also exports parts from Morocco through its ILN. For this, Renault organises milkruns and suppliers deliver to the Tangier plant. There, it consolidates shipments into containers. “We launched this in June and thus far, we have exported two containers to Brazil,” reports Joyeux.

Renault plans to move the Logan model from Casablanca to Tangier, which means the plant’s container shipments will increase. Joyeux says that both feeder vessels and trucks each take one day to travel the 350km from Tangier to Casablanca. Renault uses whichever method is less expensive. He adds that Renault tries to avoid outside warehousing. “Most parts go to the warehouse area at the plant and some go directly to the line,” he says.

Renault’s customs clearance process is smooth for Morocco, says Joyeux, thanks to a good relationship with the government. “Customs is transparent and there are no delays,” he says. Nevertheless, Joyeux notes that Morocco needs more logistics service options, such as cheaper transport from Spain and from other parts of Europe, greater shipping frequency and more players. “Our LSPs need a higher performance level,” says Joyeux. “There are not many trucking companies, which means that there is not much competition. In fact, we need more LSPs to be involved in all logistics activities in order to increase competitiveness.”

Joyeux notes that shipments from France, Spain, and Portugal to Morocco are increasing. Renault needs a competitive automotive sector in Morocco for which it must have more local integration and new suppliers. He says that with more transportation between Spain and Morocco, Renault’s costs should decline.

Another challenge is simple geography. “Morocco is like an island. It is difficult to cross borders. For example, we cannot use roads to transport between Morocco and Algeria. This is due to political reasons, and it is inconvenient because Tangier is an 800km distance from Algeria,” says Joyeux.

On the finished vehicle side, logistics service provider STVA works with Geodis in a joint venture to manage Renault’s outbound flows for both road and for rail. The JV, called GSTM, is split 85% STVA and 15% Geodis, according to Dominique Negre, STVA’s marketing and prospective director.

The Renault factory links to the port of Tangier via a single rail track with a dedicated shuttle service for exports from Melloussa. The logistics provider receives the vehicles at the plant and sorts them by transport mode – rail for export or road for domestic distribution. It handles all rail processes for export, including the design and supply of rail wagons and ocean processes.

"There are not many trucking companies [in Morocco], which means that there is not much competition. In fact, we need more LSPs to be involved in all logistics activities in order to increase competitiveness" - Alain Joyeux, Renault Morocco

Each wagon holds 24 vehicles and there are ten per train for a total capacity of 240 units. STVA ships several shuttles per day. “We expect to receive a second set of ten wagons at the end of 2013,” says Negre. The distance from the plant to the port is 35km and all vehicles ship by rail.

The Tangier Med Port Authority has three berths. Negre says it expects 185 vessels to call in 2013 – nearly four per week. Renault imports originate in Romania, Turkey, and western Europe, and STVA unloads the vessels and provides PDI upon request. Renault’s dedicated terminal has a 6,500-unit capacity on 13 hectares.

For its domestic distribution, Renault transports either seven or eight vehicles per truck, but it is trying to increase this figure. “Competition in truck transportation would be a key way for us to optimise our logistics efficiency,” says Joyeux. “At this point, we use one trucking company for exports and one for domestic deliveries.” 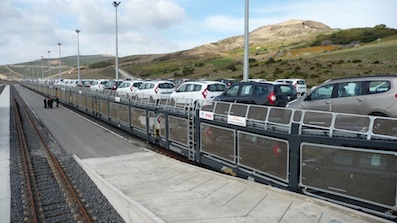 Among Renault’s outbound challenges is its storage space. “We need to optimise our storage and distribution,” explains Joyeux. “This means having two points of distribution – one in the Tangier zone for distribution to the northern part of Morocco and one in Casablanca for the rest of the country.” The company aims to launch this system in early 2014.

Renault has successfully established its logistics infrastructure on both the inbound and outbound sides, but there is more to do, including optimising outbound distribution and gaining the use of a more robust system of logistics service providers, admits Joyeux. However, the company has already come a long way in establishing its Tangier plant as the largest in Africa, and it is likely to continue to expand in North Africa.