Ro-ro by numbers: Through the storm but never far from the rock 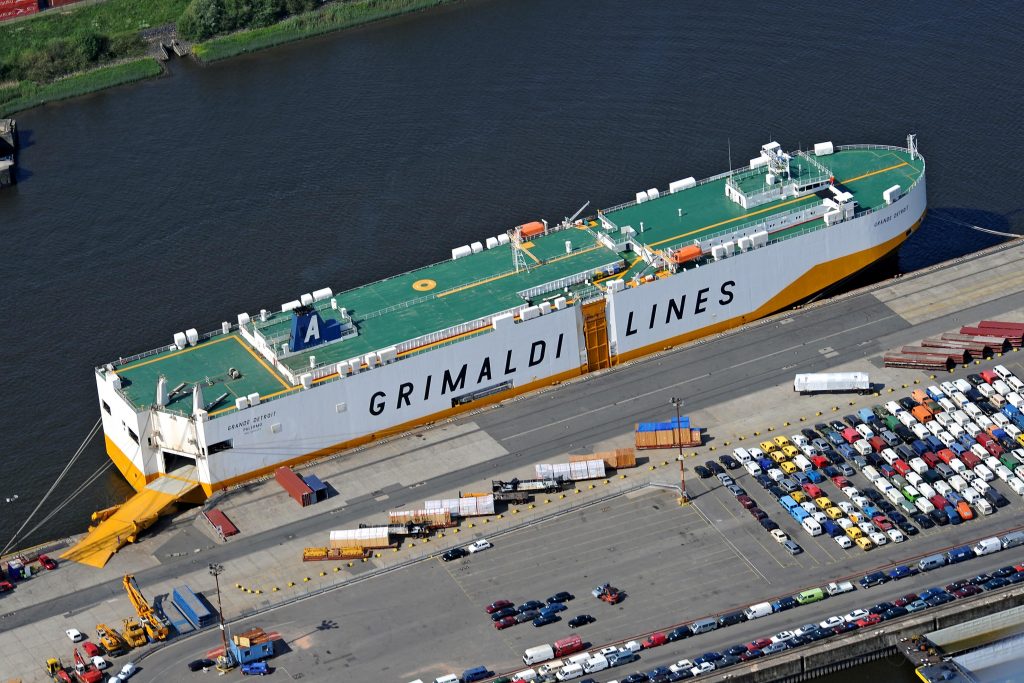 After navigating unchartered water following the global financial collapse, carriers are now back on the lookout for growth, albeit in an increasingly fractured market.

During the past decade ro-ro shipping lines, and in particular pure car and truck carriers (PCTCs), have sailed a rough and wild current. In brief, the sector was riding a wave of globalisation and growth around 2005, which would see several years of strained fleet capacity and a rush of new ship orders for larger vessels just as trade crested in 2008, and crashed spectacularly. Ships were mothballed and scrapped, routes closed, and a tendency towards ‘slow steaming’ emerged to save costs and keep balance sheets afloat.

In the years since, trade has recovered and it is to some extent a calmer sea in which to sail (at least compared to the bloodbath of container shipping). Though somewhat delayed, the trend towards larger ships has gained cleared momentum again. However, the car trade is caught between destabilising gales. Larger ships are most optimal on high volume, stable routes – the kind that seems to exist less and less in an increasingly fragmented market. Furthermore, a shift in exports from Japan, which may become starker over the coming decade, could herald even more dramatic changes.

Analysis from both WWL’s Market Intelligence arm and Clarksons Research Services suggests that the average size of a PCTC has grown 20-25% in the past decade, from around 4,000 car equivalent units (CEU) to 5,000 CEU today. The latest PCTCs being delivered are consistently larger than 8,000 CEU. Fleets are also younger as a result of new investment and the scrapping of older vessels. To that extent the shipping industry has been disciplined in managing the fleet – but its overall capacity has nevertheless grown by 70% in CEU terms since 2005, according to WWL.

Trade in shipping cars, however, has been more subdued; Clarksons expects around 26.8m units to be moved by sea this year, compared to 24.3m in 2005. There have been increases in other trade, including high-and-heavy and project cargo, but the industry has had to adjust to weaker volume growth and rising costs (some of them regulation related, as with sulphur emission controls, or anti-trust fines).

Japan’s decline is reshaping many aspects of the industry; its owners are buying ships at a slower pace than elsewhere and its yards have lost out to Chinese and Korean builders. Some carriers, meanwhile, have restructured their businesses – WWL cut its ocean staff by 18% and has maintained a stable number of ships. The European short-sea trade has seen some consolidation, along with route closures. At the same time, a major new player has entered the market since the financial crisis in Glovis, which has expanded its fleet aggressively to serve the Hyundai Motor Group and others. Consolidation may yet be on the cards for deep sea. 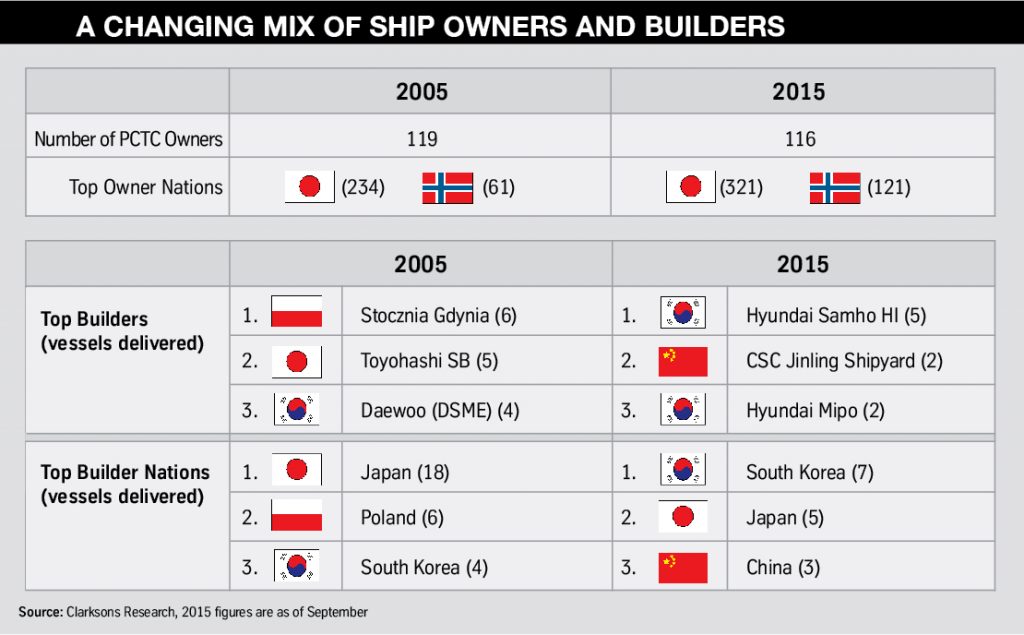 Trade lanes have been disrupted. By 2008, Japan’s light vehicle exports were nearly 6m units per year, most of which (a half million knockdown kits notwithstanding) would touch a ro-ro ship; a further 2.7m units came from South Korea.

Demand, currency shifts and demographics have contributed to Japanese decline. Though it recovered after the crash of 2009, this year Japan will probably ship 3.9m exports, half a million units fewer than a decade ago and well off the peak. South Korea’s rise in the years following the financial crisis was steep, but most analysts predict that its 3m vehicle exports are unlikely to grow further in the medium to long term as Hyundai-Kia expand global plants and General Motors restructures in Asia. 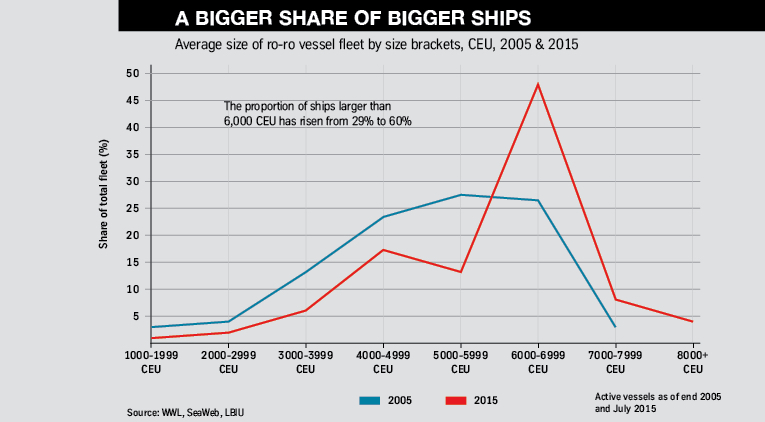 The other important export point, Germany, has defied the trends that worked against Japan and the rest of Europe. Exports rose from 3.79m passenger vehicles in 2005 to 4.3m last year, according to the German carmaker’s association, VDA, and are stable. But while Germany is a significant exporter for deep sea, especially to China (274,000 units last year) and to the US (613,400 in 2015), 2.6m of its exports stay in Europe. While a good number of these move by short sea, Germany may see declines for deep sea as carmakers increase local production for major volume markets in China, the US and Mexico. In China, where German exports have enjoyed strong growth, vehicle imports have already dropped more than 20% this year in an uncertain market, just as carmakers, including German OEMs, are opening more plants in the country.

The fallout from Volkswagen’s emission fraud may also have negative impacts on German exports globally.

North America may drive the biggest changes. Mexican exports reached 2.6m light vehicles last year, and are on pace to grow 8-9% in 2015; they have already doubled in a decade, and are set to grow more. And yet, it is mainly a regional growth story, as more than 80% of Mexican vehicle exports go to the US or Canada. While there has been an increase in short-sea shipping, rail remains the dominant mode, moving 70-80% of northbound exports. 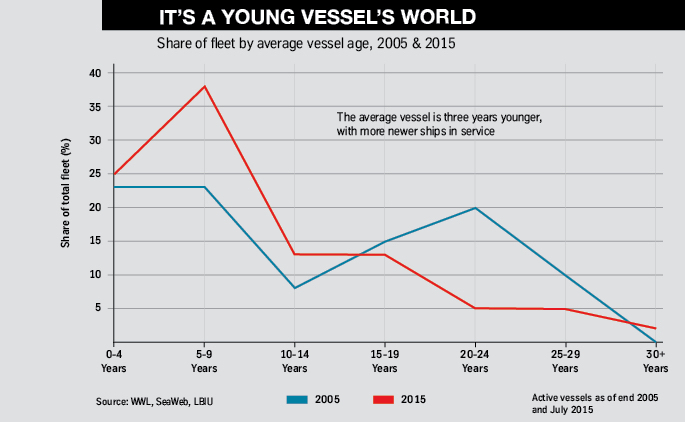 Overall, the forecast picture for US imports from outside NAFTA is murky. So far, a major decline has not been evident: in 2014, they reached 3.5m units, and are on pace to increase slightly to 3.6m this year. Though the import share of the market has fallen, that would still be close to the high of 3.8m imports in 2007 and up substantially from 2.7m units in 2009.

However, all of the major importers to the US – including Hyundai-Kia, Toyota, Nissan, Subaru, BMW, Mercedes-Benz and Volkswagen Group – have plans for more US or Mexican assembly, with most new volume intended to stay in the region. Brandon Mason, lead Americas analyst for PwC Autofacts, estimates that out of 2.65m units of expanded capacity expected between now and 2021 in North America, 84% (2.23m) could stay on the continent, including 1.85m units for the US. Given that overall sales are expected to be relatively stagnant, that could lead to a drop of up to 50% for vehicle imports arriving by deep sea.

Predictions can be wrong; the US market has proven to have an insatiable appetite for foreign imports many times over. Trade deals with the EU or the Pacific Rim could also alter the picture. Recovery in Brazil, where trade restrictions and a recession have weakened vehicle trade, could yet spur flows in and out of South America. Mexico should also become more of a deep-sea exporter as premium brands build factories there. And a lasting European recovery would also help deep- and short-sea shipping.

But ultimately, growth may come from smaller, fractured flows in Africa or Asia. The past year has already seen expansion in several surprises places, such as from India to Mexico. As with the last decade, it is unclear if China’s vehicle exports will have a meaningful impact for global shipping.

With large volume flows at risk, it is no wonder the shipping industry continues to call for more hub-and-spoke trading patterns, especially as bigger ships come online. The next decade could see some of the choppiest waters and biggest splashes yet.

Click here for an in-depth focus on WWL, including an interview with CEO Christopher J Connor.