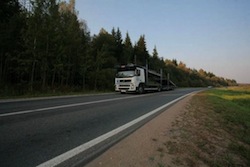 From November 1, 2014 the Russian government is imposing a new fee on trucks exceeding 12 tonnes using federal highways in Russia, equal to RUB3.5 (US$0.1) per kilometre. The Russian highways authority said the move will not have a significant effect on the road transport of finished vehicles as the costs remain below those levied on movements in Europe. It also said that innovations in the finished vehicle transport market promise greater efficiencies to counter the increased costs. This is debated by experts outside the government, who have stated that the new levy could lead to a shift in the number of vehicles moved by road to rail because of the costs associated with routes that cover more than 1,000km where unit costs per kilometre covered by road lose out to the longer distance efficiencies achieved by rail.

"In European countries, the same rates are higher than those it was decided to establish from November 2014 in Russia,” said Roman Starovoyt, the head of Russian highways authority Rosavtodor, and one of the authors of the bill, adding that the change in policy will have minimal impact on carriers. “According to our calculations it is expected that the decrease in net profit will be on average between 0.36-0.5%, so it should not affect the consumers of services,” he added.

At the same time the Russian authorities insist that the new system would have many advantages, thanks to developments in the truck market.

"Innovation will really reduce the number of trucks on the roads, but as a result we will be able to abandon seasonal restrictions on truck traffic on particular highways,” said a spokesperson for the Russian Ministry of Transport. “Also, as a result of innovation, there will be raised additional funds for the construction and maintenance of roads, so it will gradually improve their performance. This, in turn, will allow carriers to reduce the cost of repair of their vehicles,” he added.

According to the head of the research department at the Transport Institute of Natural Monopolies, Vladimir Savchuk, road transport in Russia shows greater efficiency in the movement of vehicles over a distance up to 1,000km. Between 1,000km and 3000 km rail begins to compete with road on price and, when distances exceed this, rail becomes the more efficient and economical mode.

The proposed fee is more likely to see a switch in modes from road to rail on those routes that exceed 1,000km accordingly.

"The bill has its advantages as, in the future, on borrowed money, it will mean improved infrastructure, including the building of new roads,” admitted Pavel Shulgin, member of the Russian Association of Freight Carriers. “However, at the same time the new cost of road transport is likely to deter companies from transporting cars at a distance of over 2,000 km by road transport, since in this case the cost will exceed RUB 7,000 (US$230). This, taking into account the tariffs on Russian railways, is quite an impressive amount."

The costs of the development and implementation of a system that will monitor the movement of trucks on the roads is likely to reach RUB180bn (US$6bn), while the penalty for not paying the new fee could reach RUB1m (US$30,000).