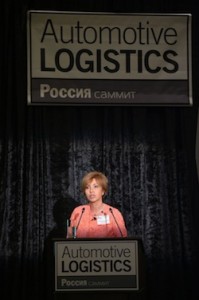 The depreciation of the rouble has had a devastating impact on the Russian automotive industry, pushing up the price of imported products, including vehicles and parts, while hurting household incomes. However, the fall in value has also impacted manufacturers’ attempts to reach supply localisation targets agreed with the government.

Failure on the part of the government to either compensate for this change or adjust its calculations could mean some manufacturers lose customs and tariff advantages on imported products.

Speaking at this year's Automotive Logistics Russia conference in Moscow, Wilhelmina Shavshina, legal director and head of DLA Piper’s foreign trade regulatory practice (pictured), revealed that many carmakers and suppliers who had signed agreements with Russia’s Ministry of Economic Development in 2011 on production capacity and component localisation failed to reach their 2014 targets, and were likely to fall short in future as well.

The issue stems from the Russian market’s collapse, in which sales and production have dropped by nearly 40% so far this year relative to 2014, but also because agreements that were signed based on 2011 or 2012 exchange rates have been dramatically impacted by the rouble’s depreciation. With falls of more than 50% against the dollar, for example, the ratio of value for imported components in the final price of a product has consequently risen by more than the value of localised parts.

“Many companies who have been localising their production in good faith already missed targets last year, and would struggle to keep up with the more aggressive localisation rates scheduled for the coming years,” she said.

“The initial localisation rates were fairly easy for companies to reach just by setting up local assembly in Russia,” said Shavshina. “But adding value is harder, especially for those who agreed those percentages at a certain dollar-rouble exchange rate. At those rates, they would have reached 45% by this year, but the decline in rouble last summer has taken that back.”

The government has composed a mathematical equation that is supposed to compensate for this change in value, but Shavshina, who has a degree in mathematics, indicated that the formula itself was flawed, if not altogether baffling. “It is not based on logic,” she said, explaining that it would not come anywhere near compensating for the actual fall in the rouble’s value.

Shavshina said that there were also other practical difficulties for companies reporting their localisation rates to the Ministry of Economic Development. Carmakers might be buying supply modules from a tier supplier in Russia, but those components might largely be imported. The government requires proof about the specific levels of localisation, but this is not always possible, since the companies who bought them might not have official importer status, and thus lack the specific paperwork required.

Shavshina has worked with the business community to propose a new formula that would effectively account for the changes in the exchange rate. She is also working with the Ministry to encourage it to adjust its processes since the economic environment in the country has changed so dramatically.