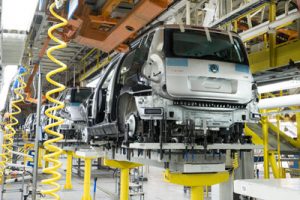 For the past several years, Russia’s economy and automotive industry have been facing a 'perfect storm'. Practically everything that could happen to hurt the sector and its consumers has done so, whether it be the decrease in energy prices (upon which the Russian economy is highly dependent), a significant currency depreciation, economic sanctions or difficult geopolitical situations.

Russia has also faced several big issues that would have been difficult to predict, such as the conflict in Crimea and with Ukraine, Turkey’s shooting down of the Russian SU-24 fighter jet last year (which has prompted further sanctions and import bans) and, most recently, the Russian passenger plane that was brought down leaving Egypt.

The result has been a prolonged decline in Russian vehicle sales from a peak of around 3m light vehicles in 2012 to around 1.6m units last year.

This year, some carmakers and logistics providers thought they might start to get some relief. Indeed, in the early months of the year the downward slide did finally start to slow – but it wasn't a stable trend, according to Tatiana Hristova, manager for central and eastern Europe light vehicle forecasts at IHS Automotive.

Speaking at this week’s Automotive Logistics Russia summit, Hristova said she expected the market to drop again to 1.4m units. Russian vehicle production, meanwhile, would fall as low as 1.2m units this year, down from 1.3m in 2015 and 2.1m in 2012, she said.

However, Hristova said she expected 2016 to be the bottom of the market, with recovery starting by the second half of 2017. “Consumer expectations will stabilise and the population of Russia will adapt to the new conditions and prices, and the currency exchange rates. As a result, we will start consuming more on the whole, and on the other side, the exchange of vehicles in the second half of 2017 will support sales in the Russian automotive market,” she said.

She does not expect a ‘V’ shaped recovery, however, but a slow-forming ‘U’.

While Hristova said sales of 3m units were “easily achievable” again in Russia, IHS does not currently see those levels returning until 2026 or 2027. Local production, meanwhile, which has gained substantial market share over the import of vehicles since the last market peak, will also rise slowly over this period and is expected to reach 2.7m units by 2026.

Over the next ten years, automotive logistics providers, OEMs and suppliers would have to find ways to survive this perfect storm and come out the other side, she warned.

Export, export, exportHristova said automotive companies had already tried to optimise their processes and product lines and minimise costs. Some companies, such as General Motors, had already chosen to leave the market; others were waiting for better times, and some had even increased their market share with aggressive product launches, she said – most notably Hyundai and Kia, which together now account for around 20% of the Russian light vehicle market.

Some carmakers, meanwhile, were looking to take advantage of the rouble’s sharp decline to increase exports, she suggested.

Standing in the way, however, is Russia’s relatively poor reputation for quality, brands and competitiveness, as well as its poorly developed logistics and distribution network globally. Russian factories, meanwhile, are not all geared for global exports and could struggle to compete against available capacity in other markets, whether in Europe, Asia or North America.

Currently, Russian vehicle exports are falling significantly; from around 115,000 light vehicles last year (just 0.71% of European exports), volumes are expected to drop to around 81,600, following market and regulatory issues in some export markets for Russia, notably Central Asia.

However, despite the challenges, Hristova anticipated relatively strong growth for Russian exports. She said she expected light vehicle exports to reach 340,000 a year by 2029, including 170,000 units going to eastern Europe, 5,000 to the Middle East and Africa, and 4,000 to South America. There were no real opportunities for North America or South Asia, she said: while there could be some exports to both in the short term, both regions were looking to build their own production sites, she stressed.

Hristova said exports could reach as many as 635,000 units by 2029 in a more optimistic scenario, however, including the potential for some exports to Asia and fairly significant volume to South America.

The Russian government is offering its help. It recently announced it would provide a budget of 3.3 billion roubles (around $50m), to support the export of cars from assembly plants in the country, according to Dmitri Vostrikov, managing director of Russia for WWL. The subsidy will help cover a variety of logistics expenses, including up to 100% to bring cars in line with international standards, up to 80% to cover inland transport costs to the Russian border and up to 50% for sea transport.

The good, the bad and the uglyThere are, of course, advantages and disadvantages to Russia increasing its exports. The popularity of Russian brands is not high and consumers have high expectations regarding quality. Russia's logistics network is also underdeveloped and there is extremely high competition on European markets. However, Russia has a widespread locally assembled product portfolio, high assembly quality, advantages from currency depreciation and the government support. The current economic situation also means Russian manufacturing will have a competitive advantage over the next five years, with the savings per car standing at around €250 ($278) per vehicle.

While the idea of increasing exports is appealing, Russia will have to choose its markets carefully. The average import tariff to South America is around 35%, as it is in Africa. The Middle East tariff is around 5%, but Iran can be up to 90% and South Asia more than 100%, making exports extremely unlikely.

There is also the question of sanctions. It is forecast that Russia's geopolitical situation will start to improve from the second half of 2017 when sanctions are slowly abolished, at least from the EU. Hristova said that it was likely European sanctions would begin to be lifted in 2018, although American sanctions could be prolonged for years more. “But we don't see significant potential for exports to the US in any case,” she said.

Russia's recovery is likely to take longer than hoped and the country's recession is likely to last for the next few years at least, said Hristova. While sales have virtually crashed over the last few years, if companies can survive the perfect storm, opportunities are likely to appear over the next decade – especially in exports – although a higher investment in logistics and local sales and service will be needed to support this, she added.