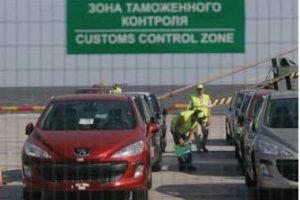 Sanctions on Turkish imports imposed by Russia last year have eased, but difficulties still remain for those seeking to move goods across the border, delegates at last week's Automotive Logistics Russia conference were told.

Despite some longstanding trade agreements, tensions replaced ties late last year as two Turkish F-16 fighters shot down a Russian Su-24M bomber near the Syrian border in November. Russian Prime Minister Dmitry Medvedev responded by imposing a number of economic measures and sanctions, which included restricting the import of components and semi-knockdown vehicles from Turkey. Many OEMs also received notice from the Russian federal customs service that it would refuse to register declarations on Turkish products.

The total value of exports of vehicles and automotive components to Russia stood at $800m in 2014, with components accounting for $440m of the total, according to the Turkish Exporters' Association.

Earlier this year, Russia began to ease its sanctions on Turkey due to the state of the economy and only a few days ago, their respective presidents Vladimir Putin and Tayyip Erdogan spoke on the phone for the first time since the incident and agreed to meet in person. The two countries are now reportedly taking steps to repair the damage.

Customs issues between the two countries remain, however, and were high on the agenda at the Automotive Logistics Russia conference in Moscow.

Igor Nesterov, logistics leader, Russia at Wabco, asked delegates: “What about your relations with Turkey? How are you working with this? What are you doing? Do you refuse to have Turkish goods at all or do you ship inventory for a whole year and send it through a special customs point?”

Mikhail Galushchinsky, transport logistics manager at Iveco/CNH, said his company had a shipment of agricultural tractors waiting to be exported to Russia from Turkey at the end of last year but as relations between the countries worsened, the tractors got stuck in customs clearance. After a lot of delay including a lengthy examination of the goods at customs, the company was informed it would be “impossible” to export Turkish goods to Russia any longer, he said. The tractors got sent back as a result.

Earlier this year, the company tried to ship the tractors once again via another route, but encountered further issues based on technical regulations and certification.

Another delegate said he wasn’t surprised. “Our customs have many ways of denying goods from certain countries of origin,” he pointed out.

There has to be bilateral cooperation but in many cases, customers don't understand this, he continued. When working on behalf of customers, it's important that risk is reduced as much as possible and that customers have as much information as possible, he stressed. “The more information your partners have, the more opportunities they will have to solve issues with customs, even when it comes to certain countries,” he said.

There was also the 'human element' to work with, stressed this delegate. “When you work with customs, you work with people. Some people are better than others. It's 100% people relations,” he said.

Eugeny Sukhoy, warehouse and distribution manager at GM Auto, said many automotive logistics companies knew how difficult it was to work with Russian customs, not least as each customs official could have their own opinion as to how things should work. Even working with a customs broker, there could still be issues. In some cases, parts could not be delivered from Turkey to Russia for three to four months, Sukhoy observed. However, a new policy implemented recently had allowed the automotive industry to restart importing Turkish parts and components legally, he conceded.

Another delegate suggested the time taken to move through customs between Turkey and Russia was finally starting to come down – in some cases to just three to five days.

Sergey Bannov, director, material planning and logistics at Ford Sollers, said his company had successfully moved finished vehicles from Turkey to Russia. “Dealerships are starting to get better after several months of struggle and have started doing little dances for customs officials,” he said. However, Bannov added that the OEM did have eight vans being imported from Turkey to St Petersburg that had got stuck at the port and didn't get customs clearance until their storage time had expired, forcing them to be sent back.

There were also difficulties for components as well as finished vehicles, he noted. “At the start of November last year, they [automotive components] were not being let into Russia without an official decree. Informally, this was resolved at the start of December. We found ourselves in a pickle at first but it resolved itself and life became better at the beginning of December,” he said.