Russia conference: Why forecasts are futile in the finished vehicle sector 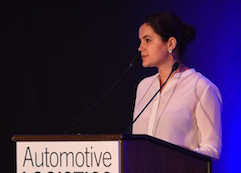 The Russian car market could easily face a sudden shortage of transporter capacity if vehicle sales recover over the next three years, those attending last week’s Automotive Logistics Russia conference were warned.

The current crisis in the Russian car market is having a serious impact on the vehicle transporter sector, with a large part of the existing fleet standing dormant and a subsequent lack of investment in new equipment by vehicle operators.

Speaking at the conference in Moscow last week, Anastasia Tsurkan (pictured), head of sales at Hyundai Glovis, stressed that with the continued fall of vehicles sales in the country, most transport companies had been operating well under capacity and not making the most efficient use of their assets. Consequent poor returns meant funds for investing in fleet renewal were lacking, she said.

According to Tsurkan, that meant that when sales recovered and demand returned for large volume movements, there was likely to be a capacity crunch.

The point was backed up by the managing director of Russian Transport Lines (RTL), Konstantin Skovoroda, who indicated that there were currently 4,200-4,300 car transporters operating in Russia, the majority of them purchased between 2005 and 2011. Since then, he added, there had been very few contracts for fleet renewal.

“As the result, at the moment this fleet has covered an average distance of 600,000-700,000km, so on average the lifespan of the transporters will be limited to the coming two or three years,” warned Skovoroda.

If forecasts by business analyst IHS Automotive are anything to go by, then a gradual revival of the Russian car market from next year would mean that by 2018 there could be a shortage of 2,500 transporters. Without new transporters, existing vehicles would be made to operate beyond their designated lifetime, which could cause problems for the quality of car transport across the country.

Sergei Dubrov, general director of Technovisa, said the shortage of transporters had also been influenced by a step-up in enforcement. Previously, said Dubrov, it was common for a percentage of private carriers to operate illegally, in particular by avoiding VAT. More recently, however, most of those companies had been forced out of the market, along with numerous other logistics companies.

“As the result, just in Togliati, we have nearly 1,000 unused car transporters, some of which have been dismantled, either being sold for parts or getting reconfigured [for other types of goods],” Dubrov claimed.

Carmakers would be well advised to deal only with reputable logistics providers because any that go bankrupt will leave OEMs facing problems, he added.

Call for long contractsSome companies, at least, are still purchasing transporters. Kirill Glukhov, business development director of finished vehicle carrier Vectura (a subsidiary of Adampol), said that over the last year his company had purchased 40 transporters and was planning to purchase another 60 by the end of 2016. He said the investment would help Vectura maintain stable operations over the coming years, adding that it was only possible because of a long-term contract signed with Ford-Sollers.

That was an unusual situation, suggested Skovoroda, who maintained that with a few exceptions, most companies had frozen investment in new vehicle assets. “It is unlikely that in the coming year there will be any decisions taken in regard to the renewal of investments,” he said. “Somewhere in the middle of 2017, logistics providers and carmakers will probably have to develop some joint solutions, in particular in the form of long-term contracts. That would give logistics providers additional money and the confidence to raise money for the modernisation of their fleets.”

Finding long-term contracts with carmakers was not an easy thing right now, however, argued Tatiana Fomicheva, manager of Jatis, especially since carmakers often changed the contracts they had established with logistics companies. “In Russia we have a market of customers, not a market of executives,” she stressed.

Even long-term contracts would not necessarily give logistics providers more confidence if carmakers could simply demand new contractual conditions, she pointed out.

Carmakers at the conference backed up that view. Olga Valieva, logistics director of Toyota Motors and Alexey Tenkov, director of logistics at Avtovaz, both expressed doubts that long-term contracts would really help logistics providers in terms of improving their financial situation and supporting further fleet modernisation.

Tenkov went on to suggest transport companies should not link the quality of their services to the problem of a deteriorating fleet since these were “two completely different stories”.

Temporary measures and limited horizonsOne possible, albeit temporary, option that might help transport companies looking for capacity in the face of market pessimism came from Technovisa’s Sergei Dubrov, who highlighted the role of transporter leasing companies. According to Dubrov, there were plenty of examples where car transporter companies had been forced out of the market by huge debts and leasing companies had swooped in to buy up their assets.

“There is clear potential here, though the reserve is not huge,” said Dubrov. “Some carriers are purchasing these transporters, but most are renting them.”

Another option was presented by Inna Salnikova, regional supplier performance manager at Renault-Nissan, who said logistics providers should look at extending the lifespan of their existing transporters by investing in vehicle refurbishment or upgrades.

“The only possible strategy is the right management of spend,” she said. “Logistics providers can really benefit from cooperation, including bulk buying of spare parts for transporters and building a reserve for repair at warehouses.”

Both Skovoroda and Dubrov expressed some doubt about recent forecasts for a market recovery, however, and said they could not see where those forecasts were coming from.

“People who make such forecasts are also good in explaining later why their forecasts didn’t really come true,” observed Skovoroda, adding that the factors affecting the rise and fall in the market were barely predictable.

As a result, the planning horizon for almost all logistics providers in Russia was limited to between six and nine months at best, he added – making it all but impossible for firms to realistically consider new fleet investments.