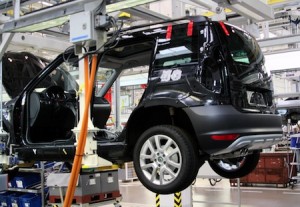 Russia has said it will ban all state agencies from purchasing imported vehicles unless they are produced locally from complete knockdown (CKD) kits with a localisation level of at least 50%. The move, announced by Denis Manturov, industry and trade minister, is aimed at further stimulating foreign carmakers to increase the level of local production in Russia. It is also aimed to placate the concerns of carmakers and spare parts producers in Russia over the worsening political relations between Russia and the West.

According to Manturov, despite the good progress made in this direction in recent years, the national average level of locally sourced content on a foreign import brands currently stands at 45%, while the spare parts sourced locally for foreign imports stands at 20%.

“However, despite this, I am sure that currently the industry could benefit from the macroeconomic situation – in particular, from the depreciation of the ruble,” said Manturov. “As the result cars produced in Russia will become more attractive to consumers.”

At the same time Mikhail Babich, plenipotentiary envoy of Russian president Vladimir Putin, said that the increase in the demand on localisation was necessary because carmakers and spare parts producers had "legitimate concerns" about the outlook for the Russian car industry.

"Some companies have already begun to cancel or restructure their development plans," he said. “The reason of such uncertainty is the worsening political relations between Russia and Western countries.

A number of carmakers have already reacted to the new initiative proposed by the government. Daimler has said that it is looking at the potential of local production of Mercedes passenger cars in Russia and confirmed that it has held a number of discussions, while representatives of Volkswagen also indicated they were expecting such step, having discussed it with Russian authorities for some time. According to a spokesperson for the German carmaker this was one of the reasons why Volkswagen launched the production of several Audi models at the Kaluga plant in May 2013. These included the A6, A7, A8L, Q5 and Q7.

This is not the first attempt by the Russian government to encourage foreign carmakers to launch or expand assembly capacities in the country. In 2011 it approved an industrial assembly incentive, which provided preferential treatment to companies that started CKD production there with an annual production capacity not less 300,000 cars per year and a level of localisation not less than 55%.

According to industry experts, the current step is aimed primarily at German companies who have expressed uncertainty about further plans for localisation following the Ukrainian crisis and the consequent political tension. According to state orders in particular, excluding police and emergency services, about 65% of all purchasing is accounted for by German brands.

"This step is directed exclusively at the German brands and aims to keep them on their way to increase the localisation of the Russian capacities,” said Russian market analyst Denis Potapov. “In Russia, the unique tradition amongst the representatives of the state administrations, regional governments, state government, all the public services and state officials is almost always to choose German brands. And the most popular in this case is a Volkswagen with a share of about 40% of the total sales.”