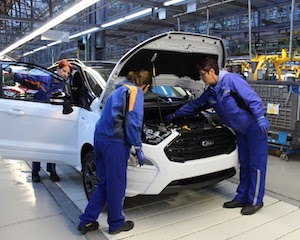 Several automotive manufacturers in Russia are increasing component exports in line with plans announced at the beginning of this year.

Joint venture Ford Sollers has doubled the number of different part lines it exports to the EU to 100 this year (compared to 50 in late 2017) and said it plans to export 120,000 units per year. Almost all of those parts are supplied to Ford’s assembly plant in Craiova, Romania.

In July 2017, Ford Sollers started exporting components manufactured in Russia by Faurecia, AGC and Magna, along with several other Russian component suppliers. The company said it was seeking to triple automotive component exports from Russia.

Avtovaz, meanwhile, is on target to export 546,000 engines this year, an increase of 76,000 compared to 2017. According to the company, those engines have in part supplied the Oyak-Renault plant in Turkey, to which Avtovaz sent 4,800 engines, up by 1000% compared to the same period of the previous year when it supplied just 500.

Avtovaz expects to increase engine production to 590,000 next year based on growing export demand but has not revealed any additional details about which markets the company exports its engines to aside from Turkey.

Renault is also among the companies rapidly increasing component exports from Russia. In 2017, the French carmaker was exporting 185 different items, worth a total value of €75m, which was 330% higher compared to the previous year.

Although 61% of all components were delivered within the Eurasian Economic Union (EEU), 25% were sent to South America, 6% to the EU, and the rest going to Africa, the Middle East and India. In 2018 the company was also planning to increase the export of car bodies to Algeria.

Multiple factorsRussia’s Industry and Trade Ministry has estimated that in 2017, Russia exported automotive components worth a total of $2.3 billion, 5% more than in the previous year. There are numerous factors behind the rise in export supplies, including a weak ruble, state aid and cheaper logistics.

The Russian government issued Rub6.6 billion ($100m) to reimburse part of the logistics costs associated with these exports, according to the Russian Export Center, a figure that is projected to grow in the coming years.

In addition, Russia’s currency has lost 15% against the Euro since the beginning of 2018, making all components produced in Russia more competitive pricewise on the global market.

Aside from logistics subsidies, carmakers and parts suppliers are free to sign a contract with the Russian government, known as a “processing on the custom territory” agreement, which allows carmakers to get tax breaks on import duties for components imported into Russia and used to manufacture any export-oriented products.

The first agreement of that kind was signed by Volkswagen Group Rus in January 2018. The company planned to export 40,000 engines per year from Russia thanks to the additional state support, although so far there is no information about how many engines the carmaker has actually exported.