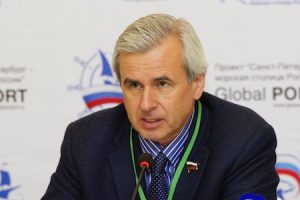 A Russian vehicle owners association is calling for a ban on the import of Volkswagen cars fitted with the DSG-7 transmission, which includes the Golf, Passat, Tiguan and Skoda Octavia, stating that the transmission is faulty and can result in traffic accidents. The carmaker also imports the transmission as part of complete knockdown (CKD) shipments to its joint-venture plant with Gaz in Nizhny Novgorod, suggesting that assembly here might also be affected.

Volkswagen Group Rus has countered that the scale of the problem has been greatly exaggerated.

At the end of February, Vyacheslav Lisakov, deputy of the State Duma and head of the Russian car owners’ interest group, Automotive Russia (pictured), said that he had received notice of concerns from a collective of VW owners regarding the issue and had put forward a proposal to ban the import and sales of vehicles with the DSG-7 transmission.

The proposal will be considered by a special commission at the Russian Parliament within the next two to three weeks.

"There were no such precedents before, but this is a case when we are really had to do something,” said Lisakov. “Two years ago, I turned to Volkswagen Group Rus with this problem and they increased the warranty on the transmission for up to five years. But it all turned out to be lies, as the warranty actually covered only two components of the transmission. As the result owners of the warranty are still forced to pay huge money for the repair and replacement of the unit.”

Volkswagen now needs to act or face losing market share for a period.

“The problem with the transmissions is already recognised in other countries,” said Lisakov. “In China they give a warranty of 10 years, while in Germany the guarantee is unlimited in time. Worldwide, concern has led to the recall of about 300,000-400,000 cars in connection with this problem, and everywhere the transmission was changed to the Japanese analogue.”

VW Group Rus said the company was working on the issue to avoid a ban on imports and they expected to reach an agreement with the Russian authorities within the coming weeks, which would allow imports to continue. At the same time, the company said that the scale of the problem is greatly exaggerated.

"In fact, the scale of this whole story is greatly exaggerated,” said a spokesperson for the company. “Many customers complain about the failure of the transmission for the sole reason that it is an innovative new mechanism. If it was a standard transmission than no one would think to raise such a scandal.”

The spokesperson continued: “The fact that, in China, customers are given a 10-year warranty can be explained by the fact that the production of the transmission there is localised and some production factors apparently forced them to establish such a guarantee period. In the case of Russia, the DSG- 7 comes from Germany, so we have a different warranty policy."