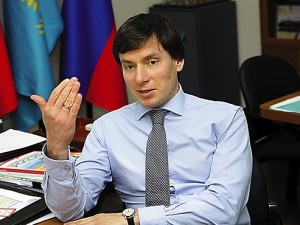 A new deal recently signed between the Eurasia Economic Union (EEU) and the government of Vietnam is expected to see import duties reduced to zero on vehicle kits exported from Russia, Belarus, Kazakhstan and Armenia to the south-east Asian country for assembly there.

The EEU’s Minister for Trade, Andrei Slepnev (pictured), expected the agreement to be ratified in the autumn and said the duties would then be reduced to zero within the next decade. He added that preliminary agreements for duty-free exports of knockdown vehicle kits to Vietnam had already been signed.

A number of vehicle manufacturing projects involving Russian carmakers are on the table according to Slepnev.

“The idea to create assembly plants in Vietnam is currently being considered by Kamaz, UAZ (owned by Sollers), GAZ and AvtoVAZ,” he said.

Those carmakers are looking to benefit from last year’s strong sales growth in Vietnam. In 2014, passenger car sales in Vietnam grew by 33% to 79,806 units, while commercial vehicles grew by 46% to 53,782 units.

Kamaz already has a production site in the country as part of a joint venture with local state-owned company Vinacomin, with prospects for expansion. Vinacomin also has a joint venture with Sollers, which plans to launch assembly of UAZ brand vehicles in Vietnam, beginning with an initial annual output of between 3,000-4,000 cars.

Meanwhile, GAZ is looking for a partner to launch assembly and further distribute vehicles in Vietnam, with the focus on commercial vehicles and buses.

Renault is also likely to benefit from the signing of the free trade agreement given its plans for assembly in Vietnam from kits shipped from its production site in Russia. A production site in Vietnam building from Russian imported kits would mean it could target sales in number of countries in the Asia-Pacific region.

According to Slepnev, Russian brands want to localise in Vietnam as it will significantly cut the logistic spend in the supply of cars to countries in the region, which they now see as a lucrative growth niche market itself and a stepping stone for the wider region.

“We expect that production of Russian brands in Vietnam will be exported to other countries in the Asia-Pacific region as well,” adding that Kamaz will be the first company to do so.

Speaking for Russian analyst firm VTB Capital, Vladimir Bespalov, warned that Russian carmakers’ plans for assembly in Vietnam should definitely factor in exports as the set up could cost each carmaker up to $100m and while growth was going well in Vietnam it was still represented small volumes.