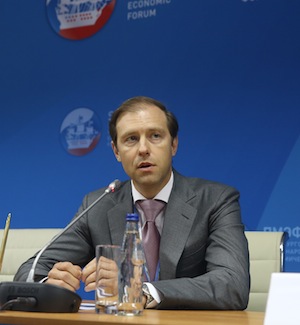 The Russian government has announced that it will provide grants of 5 billion roubles ($62.6m) to support the export of cars from assembly plants in the country.

Denis Manturov, Russia’s minister of industry and trade (left), said last week that the money would cover the costs incurred by OEMs when transporting vehicles within internal borders for subsequent deliveries abroad,

The distribution of funds and the implementation of the programme is likely to be managed by the Russian Export Centre (REC). A spokesperson for the REC confirmed that it will conduct analyses of OEMs’ logistics plans.

The state budget might not cover excessively expensive schemes, and the amount of money available may vary slightly over the coming weeks.

“Five billion roubles is the proposal of the industry and trade ministry with respect to compensation costs for the transportation of vehicles destined for export in 2016,” said Manturov. “But we have instructed [government agencies] to finalise the amount so we can decide on the allocation of these funds. In principle we say yes to the idea, but with regard to the amount, it will be close to five billion.”

The initiative has gained support from market analysts and OEMs. The ministry of industry suggests that the measure will allow automotive plants in the country to maintain the volume of production at the rate of last year: around 1.3m units.

“The devaluation of the rouble is making exports economically attractive, but to expand overseas deliveries is hard due to expensive logistics,” Vladimir Bespalov, analyst at VTB Capital said. “Now the average loading of the capacity of car plants in Russia is only 40%, according to the industry and trade ministry, and it will be impossible to increase it just for the Russian market.”

Elena Matveeva, vice-president of GAZ, agreed that the initiative would be beneficial. “This is a very important measure. GAZ Group is consistently increasing export numbers, but the high cost of transport logistics limits our abilities.

“We also hope that transport subsidies will cover not only the territory of Russia, but the delivery of cars abroad too,” added Matveeva. “For example, shipping to Cuba from the Russia border is 10 times more expensive than transportation within the country. Yet it is important that the support is extended to all types of shipping, including rail or road.”

Representatives from Hyundai, Kia and Volkswagen have already given their support for the initiative. However, a number of OEMs say that despite the significant amount of funding, the programme will not radically affect export numbers.

“The main costs fall on the external logistics, especially when it comes to sea freight,” said one representative of the Russian division of a foreign OEM who wished to remain anonymous. “The ministry [of industry and trade] discussed [with OEMs] options for broader state support of exports, with the potential to finance all logistics costs. [However], the ministry rejected the idea because of the lack of additional funds.”

The volume of logistics subsidies appears to be lower than initially expected. In November 2015, the deputy head of the industry and trade ministry, Alexandr Morozov, said the support for export subsidies could reach as much as 21 billion roubles ($350m, based on the exchange rate in November).