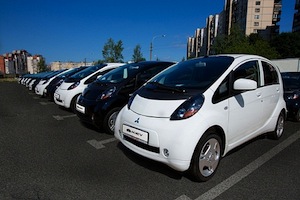 The Eurasian Economic Commission for Europe (ECE), the governing body of the Customs Union (Russia, Belarus and Kazakhstan), has said it is ready to approve the complete removal of the 19% import duty levied on electric cars imported to the country so as to stimulate sales.

According to ECE’s minister of trade, Andrew Slepneva, zero import duties in the Customs Union should boost interest to the environmental vehicles and relevant supporting infrastructure. In parallel, the Russian government is also discussing the possibility of cancelling the VAT on electric vehicle imports. Both steps will mean the cost of electric cars on the Russian market could decrease by around twice their current price.

"Currently only the i-MiEV car produced by Mitsubishi Motors is on the market with a retail price standing at RUB 1.8m ($55,000),” said Vladimir Chikin, head of customs law practice and foreign trade at law firm Goltsbat BLP. “This price involves 41.6% of duties – including customs duty of 19% and VAT of 18%. We add 19% to 18% and we get 41.6 % due to the specification of counting the value added tax in Russia in such cases."

According to the proposal, both custom duties and added value tax will be cancelled but only for electric cars, not for hybrids.

MMC Rus started selling the i-MiEV in Russia in 2011, with accumulated sales of approximately 200 units but also delivered 70 units to Russia’s Presidential Office in September this year.

Demand is forecast to boom
In addition, the Russian Network Agency (Rosseti) has announced that it will create a charging infrastructure for electric vehicles in 2014. Facilities will be located at motorway filling stations in Moscow, Chelyabinsk and later in other Russian cities, and the first charge is reportedly offered absolutely free. As a result, experts forecast that there will be a boom in demand and a sharp rise in the import of electric cars over the next eight years. Currently the market for electric cars in Russia lags far behind European countries – the total volume of sales remains at 50-70 cars per year. However, optimistic forecasts reported by Rosseti put increase in demand as much as 10 times what is currently in demand by 2014, and 1,000 times by 2020.

Thus, according to Rosseti’s forecasts, the volume of electric vehicles in the Russian market could reach 100,000 units. “The main problem that is holding back the demand for electric cars is the price, and zero tariffs will dramatically increase the interest on that type of vehicle among consumers of the Custom Union,” said a spokesperson for Rosseti.

"By 2020, according to our forecasts, up to 10% of the total number of cars sold in Russia will be electric,” said Andrey Pankov, chairman of the subcommittee on strategic innovation in the automotive industry, part of Russia’s Ministry of Commerce and Industry. “I think that the next two or three years will be the years for electric vehicles such as the Mitsubishi Outlander PHEV, Chevrolet Volt, and some other types,” he said.

At the same time, representatives of ECE note that it is likely that the cancellation of the custom duties will be a temporary measure, which will be implemented for a period of five to six years.