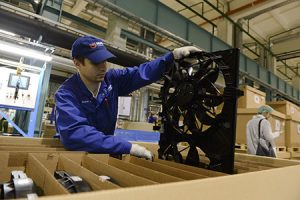 Russian companies are considering starting up a number of automotive assembly plants in Syria, Vladimir Padalko, the vice-president of the Russian Trade and Industry Chamber, has revealed.

Speaking at the Russia-Syria Investment Forum in Moscow recently, he said the idea of setting up assembly of finished vehicles there by Russian companies had been put forward by Syria itself. Such a move might involve trucks and agricultural machinery as well as light vehicles, he added.

Padalko said Syria would prefer to establish some finished vehicle assembly capacity based on knockdown kits and components from Russia, than simply to import finished vehicles from the country.

From the Russian side, he suggested, it would not be carmakers but major automotive dealers who would participate in such operations. Certain projects are already in the pipeline, he confirmed.

“Some Russian automotive dealers are ready to take the chance with their own funds to arrange some projects for finished vehicle assembly [in Syria]. It is clear today that if Russian companies will not do this, it will be done by companies from other countries,” he said.

Investment dealRussia’s government has set a target to boost trade turnover with Syria to the pre-crisis level of around $2 billion within the coming three years, according to the Russian Economy Development Ministry. In 2017, the turnover between two came to an estimated $280m, said Padalko.

Alexey Gruzdev, deputy economy development minister, said that Russia and Syria planned to boost turnover through implementation of a comprehensive investment programme. He suggested this programme would involve Russian investment not only in the Syrian automotive industry but also in infrastructure, energy, shipbuilding and other segments of the economy.

Almost all such projects are planned as joint ventures between Russian firms and local companies, said Padalko. Russian companies are already looking for partners in Syria with which to start up certain projects, including in the area of finished vehicle assembly “on an equal footing”, he added.

Both state-owned and private banks in Syria are ready to provide loans to joint ventures with Russian partners, suggested Mazen Hammour, chairman of the Hammour International Group, at the recent forum. It was important that Syria was ready to ensure the security of Russian nationals in the part of the country controlled by government troops, Hammour stressed.

Duty breaks required[related_topics align="right" border="yes"]Russia would need some preferential conditions relating to imports of automotive kits and components into Syria to get the first finished vehicle assembly projects up and running, however, according a source in the Russian Association of Automotive Dealers, who preferred to not be named.

Were that to be forthcoming, Russian companies would be likely to take part, he said.

“In general, Russian companies would be interested in exporting components and kits to Syria, since the automotive industry in Russia is operating only at part of its production capacity, with demand in the domestic market still rather weak,” he confirmed.

Without such an agreement on duties, however, no specific projects could be discussed, said the source.