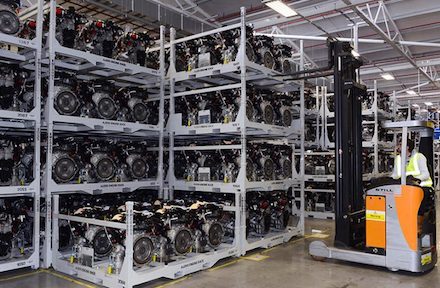 Russia’s Ministry of Trade wants foreign OEMs to continue to comply with the industrial assembly agreements drawn up under Regulation 166. The regulation, which was amended in 2010, allowed foreign carmakers to import parts at preferential rates of customs duty. However, carmakers no longer have a reason to comply with the agreements since the Russian government cancelled the tax breaks on parts imports, with effect from the beginning of July.

According to a draft decree posted on the government’s website this month, subsidies could be introduced “to recover the conditions of the industrial assembly agreements” and to “ensure that obligations undertaken [by carmakers] within these agreements are fulfilled”.

The tax breaks were the main incentive in the industrial assembly agreement, while their cancellation was the main penalty for not complying with its requirements.

The subsidies would not be tied in any way to Russia’s obligations as a member of the WTO, said the Ministry. In May, it announced it was because of the WTO requirements that it had to withdraw the tax breaks on parts imports.

Now the Ministry wants to determine the amount of subsidy on a company-by-company basis based on how each is complying with the requirements of the original regulation. Carmakers were originally obliged to establish production capacity of between 300,000 to 350,000 finished vehicles, while maintaining an average localisation rate of not lower than 60%.

[mpu_ad] According to the Ministry, the Russian government is ready to subsidise up to 90% of the cost of importing apart from outside Russia, as long as the carmaker meets its localisation targets.

The subsidies are retrospective so under the new proposal carmakers would have to file an application for reimbursement of the parts imports costs starting from July 1 2018, even if the government decree is adopted later this year. This is especially important, as the authorities want to encourage carmakers to maintain the localisation rate of more than 60% for the period up until the regulation comes into force.

The process of getting subsidies retrospectively following the full payment of import duties could be complicated according to Tatiana Kofanova, head of the automotive industry department of consultant firm Deloitte. However, she said a complete cancellation of breaks in import duties would be more of a major blow to foreign carmakers that have invested in raising localisation rates in Russia.

“These subsidies would not worsen their position in the market significantly, although the whole process [of getting subsidies] would be rather complicated, as there would be a time gap between paying import duties and collecting the subsidy,” Kofanova explained.

Currently, the draft decree is subject to a public hearing. It is believed that the new regulation could be adopted later this year.