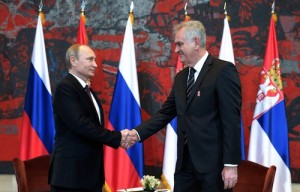 [Story updated on 30 October] Russia looks likely to cancel the 30% duty it imposes on imported vehicles from Serbia as part of an updated free trade zone agreement (FTZA) designed to establish the large-scale import of Fiat cars. The move to remove the duties was revealed following negotiations that took place during Russian president Vladimir Putin’s visit to the Serbian capital Belgrade.

"Given our good relations with Italy, and now Fiat, and our warm, close relationship and alliance with Serbia, I think we could agree on a certain quota of duty-free supply of these vehicles to the Russian market,” said president Putin at a meeting with Serbia’s prime minister, Alexander Vucic.

Russian industry experts expect the duties to be cancelled within a complex programme aimed at increasing trade between the two countries. Russia and Serbia already have FTZA, which was signed in 2000, but the list of goods that are supplied duty-free has so far not included cars.

Fiat currently produces the 500 and 500L models at its Serbian plant in Kragujevac following a $1.3 billion investment in the plant, which is a joint venture with the Serbian government. The company launched production of Fiat 500 there in 2012, with 67% of its content locally sourced, and since then has made 242,000 vehicles to the end of September this year. Production figures for the first six months of this year reached 62,000 according to the company. It plans to make 100,000 cars in 2015.

The removal of tariffs could influence Fiat to abandon its plans to export up to 30,000 vehicles to the US in 2015 as export to Russia looks means a lower logistic spend, though the company already exports 500L vehicles to the US and made an initial delivery of 3,000 last year.

“Within such an agreement Fiat’s plant in Serbia could deliver to Russia between 50,000 to 100,000 cars annually,” said the chairman of the Serbian Chamber of Commerce, Milivoye Miletic. “This is great news for the producer and its workers, taking into account the fact that there were observed problems with sell of these cars.”

However, it will be hard to establish large-scale exports of the 500L because the brand is not very popular in Russia.

“If Fiat starts exporting cars from Serbia, then it would be hard for them to carve out a niche, unless the price of the cars was sharply decreased," said Vladimir Bespalov, analyst at Russian bank, VTB Capital.

The managing partner of analytical agency EURussia, Ivan Bonchev, also noted that, according to statistics, Fiat’s share in the Russian market has always been low and its prospects, even with the agreement, look questionable.

However, representatives of Fiat in Russia said that the cancellation of duties together with tax breaks for Fiat’s products out of Serbia would allow it to set the competitive price for its cars, which could lead to an increase in market share.