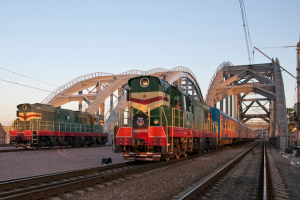 A draft decree recently released by the Russian Ministry for Trade and Industry shows that it plans to allocate 850m rubles ($14.3m) this year to subsidise finished vehicle movements from the Far East to the European side of the country.

In total, the Russian government plans to reimburse transport costs for 17,000 finished vehicles across a distance that ranges between 8,000km to 9,000km. This accounts for about 50,000 rubles ($845) per vehicle on average, which roughly covers 80-90% of transport costs. That estimate is based on the 2017 common tariffs provided by Russian Railways (RZD).

Prior to 2013 the subsidies for vehicles assembled at the Far East and moved west were remitted directly to RZD. However, the scheme was adjusted following Russia’s joining the World Trade Organization (WTO) and the money is now given to the carmakers.

From 2015, the Ministry for Trade and Industry started to subsidise the transport of finished vehicles, not only by rail but also by sea, to “create a competitive environment in the transport services market”. Despite that, 100% of deliveries are still made by rail on RZD services.

State aid for Mazda SollersSpeaking at a governmental meeting on August 18th this year, Russian prime minister Dmitry Medvedev explained the state aid for Far Eastern assembly plants was necessary because the car market in the Far East was rather small. Without the reimbursement of logistics costs “it is virtually impossible to ensure the competitiveness of the regional companies”, reasoned Medvedev. He went on to express confidence that the allocated subsidies would “keep the workplaces at the assembly plants and associated businesses in the region”.

The total amount of subsidies, just as in all previous years, will be granted to Mazda Sollers Manufacturing Rus (MSMR), the joint venture between Mazda and Russian carmaker Sollers, which runs the assembly plant near Vladivostok.

In addition to the logistics subsidies, from late 2017 the company’s plant will also be included in a so-called ‘territory of priority development’ in Nadezhdinskaya, around 30km from Vladivostok. At the government meeting in August, Alexander Galushka, from the Ministry for Far Eastern Development, said the joint venture would receive a preferential tax regime on the assembled vehicles.

Commenting on the decision to include the company’s plant in Nadezhdinskaya TOR, Vadim Shvetsov, the CEO of Sollers, said the state aid would enable the joint venture to speed up the construction of its engine plant in Vladivostok.

MSMR aims to make 50,000 engines per year at the new plant, which will both serve the needs of the Russian plant and supply engines for export. Originally the plant was slated to be commissioned in 2018-2019 and Shvetsov did not specify when exactly he expected it to happen now.

Additionally, Shvetsov said that because of the state aid MSMR could also consider the further modernisation of the existing production facilities as well as launching assembly of new models, though he did not provide any details on planned projects.