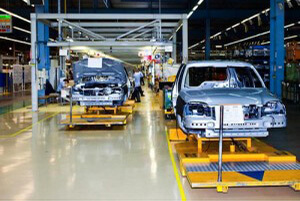 Russia is likely to cease importing almost all automotive components and spare parts for two months from May 25 to July 25, as the federal government seeks to impose unprecedented security measures in the country for the duration of the Fifa World Cup 2018 football tournament.

The government is planning to prohibit the transport of all chemical, biological, toxic, radioactive and explosive substances within a radius of 100km of the football stadia and other relevant sports infrastructure during this period.

The zones subject to the enhanced security regime will include major seaports in cities hosting games during the tournament such as St Petersburg and Sochi. The port authorities and several transport companies have already begun notifying their clients that supplies are likely to be disrupted, Russian newspaper Kommersant reported recently.

It is not yet clear whether assembly plants located within the security zones will be allowed to import automotive components overland instead.

Although the final list of goods that will fall under the restrictions has yet to be ratified, carmakers fear it will include a wide range of automotive components and spare parts.

Viktor Vasilev, external relationships director at Hyundai Motor Manufacturing Rus, said the company was concerned about the restrictions and hoped that all sides in the situation would “keep prudence”.

Nissan said the security measures could leave its assembly plant in St Petersburg without airbags during the two months of the event. The carmaker is in negotiation with the authorities but has not yet achieved “an understanding” with them.

According to Kommersant, the security measures could affect assembly at plants run by Toyota, Hyundai, Ford and Nissan in St Petersburg, plus BMW, Hyundai and Kia in Kaliningrad.

A source in the Russian automotive industry told the newspaper the carmakers had been advised to build up stocks of automotive components for their assembly lines, but because of short notice were unlikely to be able to. Problems are also expected in the aftermarket.

Legal loopholeIn particular cases, the Russian authorities could issue special permission to automotive companies to import certain “potentially dangerous” goods for their needs. Such decisions will be taken by the Interdepartmental Field Headquarters – a special body being established for the Fifa World Cup 2018 by the Federal Security Service of Russia.

All of Russia’s vehicle assembly plants currently rely on imports of components. Localisation in the Russian automotive industry ranges from 50% to 75% in compliance with the industrial assembly agreements most have signed with the Russian government. These allow such assembly plants to import components with a reduced level of customs duty.