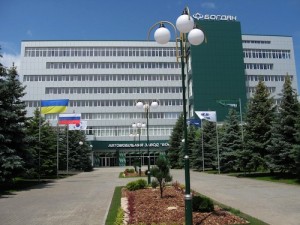 The Russian government has announced the implementation of customs duties on vehicles made in Ukraine, which, according to local analysts, could bring the two largest manufacturers in the country – ZAZ and Bogdan – to the brink of bankruptcy. Russia authorities have said that to protect its own carmakers it can no longer maintain duty-free trade with Ukraine, as the country has signed a free trade agreement with the European Union (EU).

The cancellation of duty-free trade applies not only to cars, but also to 130 different other products. It will be implemented against Ukraine, Moldova and Georgia. Ukrainian carmakers usually supply between 30-50% of all car exports to the Russian Customs Union (which includes Belarus and Kazakhstan) and the loss of the market is bad news for them.

“There is no other word to describe the situation but a real catastrophe,” said a source at the Bogdan Corporation who wished to remain anonymous. “In 2013 Bogdan already had to reduce exports to Russia by almost four times, and now the supplies will be stopped completely. During the first half of 2014 we faced losses of UAH 766m ($61m) – 14 times higher year on year –because we can not sell the cars that we produce.”

Ukraine’s prime minister, Arseni Yatsenyuk, has already raised concerns about the current situation and claimed that Ukrainian automakers need to quickly search for the new markets. According to government estimations the losses to industry from the absence of supply to Russia will amount to $120m per year. Furthermore, industry analysts forecast that every fifth automotive company could be forced to stop operations within the next two years.

“In the view of the possible import restrictions from Russia I call Ukrainian exporters to develop new markets,” Yatsenyuk said at a recent meeting on the diversification of economy. “We need to diversify markets and the sources of industrial products, including in the car industry. If the restrictions are implemented, the volume of Ukraine exports to Russia may decrease by $5 billion per year, and we don’t exclude the possibility of a full stop to any trade.”

He added that in 2013, despite the fall in exports, the volume sent to Russia amounted to 31% of all vehicle exports, equal to about $80m.

“In general it is a bad news for Ukraine because the car industry will not only lose an important sales market, but it will also lose a large part of its investments,” said Alexei Ostapenko, a member of the carmakers’ association, Ukraine Automotive Industry. “Usually the car production facilities here target mostly the Russian market and the market of CIS, while the Ukraine market itself is not very interesting to investors, especially taking into account the signed free trade zone agreement with the EU. That made importing more attractive than the localisation of production. I’m afraid most of projects in the car industry will now be cancelled, or at least hold off for a while”.