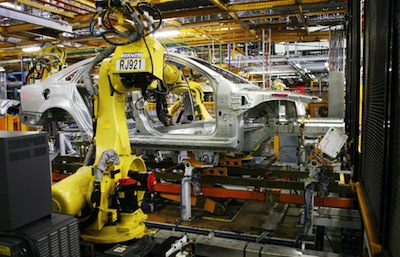 A new draft of the federal budget for 2014 states that the Russian government will allocate a record amount of money – RUB99.25 billion ($3 billion) – to support the automotive industry. By comparison, the end of this year will see total government subsidies in the area decreased by ten times.

"The growth of subsidies is related to the expected deterioration of the situation in the automotive market. The government does not directly support companies experiencing falling sales; this is usually done through special programmes. Next year, the government will support the car industry through actions confirmed through WTO regulation," said a spokesperson in the Ministry of Industry and Trade.

Under the programme, an unprecedented RUB50.4 billion will be allocated to carmakers "as compensation for the cost of maintaining jobs". Market experts do not doubt that, at this point, it has "masked" the compensation of utilisation fees – levies paid by manufacturers to cover the cost of recycling imported vehicles – that carmakers will have to pay in 2014. It is assumed these subsidies will go only to manufacturers that have assembly facilities in Russia, based on the industrial agreements the government made with a number of manufacturers, known as Regulation 166 or the 'Contract of Industrial Assembly'.

A source in the Ministry of Industry and Trade said: "The introduction of a new mechanism for utilisation fees will no doubt do harm to the implementation of investment projects already running. So we had to find some form of compensation to investors who have already implemented investment projects, to help them to return to their previous state."

Russian officials had promised that some form of compensation of utilisation fee would be entered.

"Russian automakers operating in the industrial assembly regime will receive compensation in connection with the introduction of the utilisation fee. All obligations of the Russian Federation, which were undertaken at the Contract of Industry Assembly, will be met. We just need to figure out in what form we will allocate the funds", noted the previous deputy for economic development minister, Vladimir Saveliev.

Car transport from the Far East

Another focus for the programme will be compensation for the transport of cars from the Far East. For this purpose, the government plans to allocate RUB3 billion. It has been noted that this figure could increase.

In a memorandum from the ministry for industry and trade, it was noted that "subsidies in 2013-2015 are allocated as the automotive companies provide a positive social and economic impact on the economy, and industry, of the Far Eastern Federal District."

Currently, the funds go to Sollers, who carry out transport for OEMs such as Toyota and Hyundai. However, the Ministry of Industry and Trade does not exclude that, in the future, other companies may be able to join this program.

In terms of future subsidies, the amount provided is set to increase. According to plans for the years 2016 to 2020, the government will spend RUB20.1 billion to this end.