Russian bans may not keep down imports for long 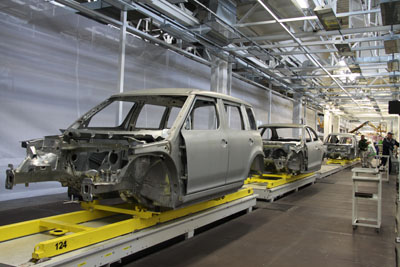 Some experts suggest that the fallout in the Russian market could eventually lead carmakers to close smaller factories, leading to a rise in imported vehicles. However, the government is launching support for sales and the supply chain

The continuing Ukrainian crisis and subsequent economic sanctions and retaliations have already contributed to a sharp decline in vehicle sales in Russia, along with scaled back production. The country is on the precipice of an even deeper economic fissure with the West; Dmitry Medvedev, the prime minister, has raised the possibility of Russia restricting automotive imports from the US and EU following the current ban on agricultural products. Russia has already restricted state purchases of imported vehicles.

In the long run, the situation could threaten Russia’s industrial base and supply chain, with experts suggesting some foreign OEMs could close their local assembly plants. At least one analysis of the situation suggests that there could be an increase in imported vehicles as factories close and customs duties negotiated with the World Trade Organisation (WTO) decrease. However, some industry participants expect Russia to further protect its industrial base.

In recent months the Russian market has deteriorated sharply; sales are down 10% in the first seven months of the year compared to 2013, including declines of more than 20% over the summer. Forecasts, including those by the Association of European Business in Russia, now expect an annual drop of 10-15% compared to 2013, compared to earlier forecasts of a single digit decline. Manufacturers are responding with cuts in production. General Motors is reducing output in St Petersburg by 20-25%. Ford has laid off employees at its St Petersburg plant as it switches to single-shift schedule. Avtovaz, which builds the country’s best selling brand, Lada, will cut production by 25,000 units in the September-October period.

But the Russian government is responding, too. At the end of August, it announced 10 billion roubles ($270m) would be put towards a new ‘scrappage’ scheme to help stabilise sales. And experts say that the Ministry of Industry is also analysing ways that it might further support local manufacturers and the wider supply chain.

However, there are deep concerns about the market’s long-term prospects. Russian carmaker Sollers, which has joint venture production with several OEMs, including Ford and Mazda, has issued a report pointing to significant differences between current trends and official government forecasts. The Sollers report suggests that the market could stagnate to 2.3m sales per year for the rest of the decade, while the government still anticipates growth to 3.6m by 2018. Sales in 2013 were 2.8m units.

Consultants at Sollers conclude that if the situation in the economy doesn’t change, it would be “meaningless” to locate production capacities in the country after 2017 for many foreign OEMs, especially after custom duties for imported vehicles decreased from 25% to 15% after 2018, as Russia agreed under WTO terms.

The Sollers report, which drew from a study by the consultancy Roland Berger, suggests that OEMs with production capacity lower than 30,000-40,000 units per year in Russia could close plants because the low output, high transport costs and low productivity would make production unprofitable. That would include brands such as Peugeot Citroën, Mitsubishi, BMW, SsangYong, Opel and Chinese brands.

Despite the government’s focus on encouraging local assembly, the Roland Berger report suggests that the share of imports in the market could rise sharply by 2020 as OEMs close plants, reaching 67%, or 1.4m vehicles, while in 2013 it was only 700,000 vehicles, or 29%. 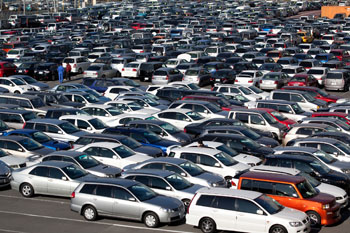 The Sollers and Roland Berger reports may seem to contradict Russia’s current production and import landscape. In the first half of 2014, for example, the share of imported vehicles fell further to 27%. The scrappage scheme, the government’s second since the financial crisis, will also benefit locally assembled vehicles. And for several years the Russian government has been encouraging local production through the so-called ‘decree 166’, which offers zero duties until 2018 for carmakers that attain 300,000-350,000 units of local capacity and a high level of localisation within target periods.

The Roland Berger report estimates that state subsidies give local production a 5-10% cost advantage compared to imports. Without the subsidy, however, assembly volume below 50,000 units would be unprofitable, putting both smaller plants and contract manufacturing at risk. It is also not clear whether all of the carmakers that signed up to decree 166 will reach the production and localisation targets – or whether Russia could even sustain financial support if the economic fallout from the crisis is severe.

Other experts agree that Russia faces structural issues that could lead to changes in the production and supply chain after 2018. "All automakers need to review their investment plans,” says Vladimir Volkov, a Russian automotive analyst. “Structural changes in the industry will only rise, partly also due to Russia's WTO accession. When in 2018 the government will cease to stimulate local production, and the companies no longer receive state support in the form of various programmes, they remain one-on-one with high transport costs, low productivity and other problems."

Nevertheless, many expect the government to try to keep carmakers in the market. Wilhelmina Shavshina, legal director of legal firm and consultancy DLA Piper, says that governmental support has been one of the key factors for foreign businesses when deciding on assembly in Russia. The slump in the market and in the currency is likely to prompt further support for domestic manufacturing.

“Businesses expect that the government will take a series of drastic measures to protect and support car assembly plants – not just automakers, but also manufacturers of automotive parts,” she says.

Despite gloomier forecasts, western carmakers have not aggressively revised their plans for Russia, with most major OEMs taking a ‘wait and see’ approach. A Ford Sollers spokesperson, for example, has said that the carmaker will still raise its supply localisation to 60% by 2016 and launch engines production in 2015. A spokesperson for BMW Group Russia has also affirmed that assembly in Kaliningrad remains profitable.

Meanwhile, the Renault Nissan alliance has maintained its targets to increase market share in the country. A higher level of localisation than other foreign OEMs in Russia is expected to help Renault. Meanwhile, incentives for domestic purchasing should benefit Lada, which Renault controls together with its alliance partner, Nissan.

The Volkswagen Group has also maintained its investment commitments to Russia. It plans to start assembly of 1.6 litre petrol engines next year by its factory in Kaluga, although executives have said that they are watching events in the country carefully.

Many analysts and executives, including the author of the Roland Berger report on Russia, Jürgen Reers, still believe that Russia will eventually surpass Germany as the largest market in Europe. However, determining whether that might occur in five years or 15 is difficult. Russia has seen a decline in confidence from foreign investors and a record level of capital outflow in the first half of 2014. Daimler, for example, has decided against increasing its stake in Russian commercial vehicle producer, Kamaz.

"Businesses expect that the government will take a series of drastic measures to protect and support car assembly plants – not just automakers, but also manufacturers of automotive parts" - Wilhelmina Shavshina, DLA Piper Russian experts have mixed opinion on the situation. Vladimir Bespalov of Russian analytical agency VTB Capital has suggested that carmakers with low production capacity in Russia could leave the market, while larger players should be able to adjust to the unstable market. While Bespalov has written that wider subsidies are as yet required, he admitted the government may need to act. Wilhelmina Shavshina suggests that the Ministry of Industry is already analysing how it may help OEMs to improve supply chain localisation.

“To date, the Ministry of Industry of the Russian Federation has been working on the analysis of automotive components industry and together with business to develop a roadmap for its development up to 2020,” she says. “[The Ministry] is already discussing subsidising the reconstruction of production areas, production engineering, and equipment renewal of equipment.”

Predicting the trajectory of the Russian automotive market, like the Russia-Ukraine political crisis itself, is almost impossible. However, it is clear that the supply chain in the country will play a decisive role in the future of production. If Russia is to seriously limit the imports of parts or cars, and then cannot support a strong local supplier base, or at least subsidise it, it’s a future that looks in doubt.