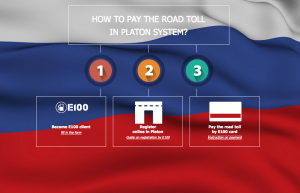 For several weeks truck owners across Russia have been protesting against the new tax system called ‘Platon’, which is reported to have not only caused a significant financial burden on the automotive business but has also been administered with numerous mistakes, bringing confusion to the logistic industry in the country.

The system charges a fee of RUB 1.53 ($ 0.02) per one km of road travelled for trucks that weigh more than 12 tonnes. From March next year this figure will be raised to RUB 3.06 ($0.04), which promises to increase the cost of automotive supplies.

“The introduction of Decree No.504 [implementing the Platon system] increased the cost of finished vehicle transport by 6% from November 15, 2015 and will increase it by 12% from March 1, 2016,” confirmed Sergey Bobryshev, logistics director at Glovis Rus, the integrated logistics provider.

Ruslan Kirillov, general director of damage prevention expert, Unicar Rus, also recognised the impact of the fee and said it would be an important factor in the increase of the cost of automotive logistics in Russia next year.

“In the current economic situation we cannot escape rising prices [for automotive logistics] due to a combination of factors such as inflation, additional taxes, reduction of turnover of the companies, as well as introduction of Platon system,” he said.

According to Elena Cherkashina, head of transport services purchasing at Gefco Russia, the introduction of the fees in November has already had an impact on the value of logistics services. She said the system had caused a number of companies to increase the cost of automotive logistics services at and unreasonable rate.

“Some carriers and forwarders have had problems with the Platon website and there is a waiting list for the required on-board devices,” she noted. “As a consequence, the resulting lack of trucks has set the price [for available services] higher. Given this situation it is important [to maintain] long-term relationships with partner companies, which operate on the agreed rates and within the cost of the fees.”

Those are not the only technical problems according to Bobryshev, who said that automotive carriers are finding it difficult to bring their fleets into operation because the Platon system is often unavailable.

“[It] includes system failures when receiving the roadmap and incorrect calculations of the amounts of payment. As a result, there is fleet downtime with consequent financial losses,” he said. “One of the carriers brought us an example: he made a prepayment on November 15th for 1m km at the rate of RUB 1.53 rubles per km and already on November 16th found that there was no money on the balance sheet. As the result he could not go into operation that day.”

Another logistics provider, who wished to remain anonymous, said the current situation would negatively affect the whole automotive logistics sector in Russia, a sector that is already under pressure in a negative economy.

“We believe that the introduction of this system should have been inadmissible for the authorities, it violates their obligations to the local OEMs, who have previously invested a lot of money into the development of Russian business,” said the source.